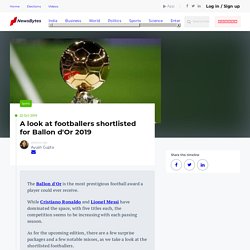 While Cristiano Ronaldo and Lionel Messi have dominated the space, with five titles each, the competition seems to be increasing with each passing season. As for the upcoming edition, there are a few surprise packages and a few notable misses, as we take a look at the shortlisted footballers. Last year's winner, Luka Modric, not shortlisted this time The notable omissions in the shortlist among men happen to be the 2018 winner, Luka Modric, of Real Madrid, along with the world's most expensive player, Neymar, of Paris Saint-Germain (PSG). While Modric faded out since guiding his nation to the 2018 FIFA World Cup final, Neymar's reign at PSG has been marred by injuries and controversies, as the two miss out. Megan Rapinoe among favorites to win women's award As for women, the winner of the 2019 FIFA Award, USA's Megan Rapinoe is one of the favorite to win the award, this term.

Love Sports news? Yes, notify me. Wish Ganguly was BCCI Chief during Yo-Yo's days: Yuvraj Singh. Brian Lara hails India's current pace attack: Details here. The current Indian pace attack is often rated as one of the deadliest in the world, as pacers like Jasprit Bumrah, Ishant Sharma and Mohammed Shami have been terrorizing the batsmen with their sheer pace since 2018. 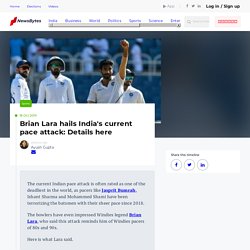 The bowlers have even impressed Windies legend Brian Lara, who said this attack reminds him of Windies pacers of 80s and 90s. Here is what Lara said. Lara impressed with India's strength While Lara termed the current Indian attack as 'pretty special', he was also impressed with their reserve strength, which reminded him of Windies bowlers. "The guys that you have on the sidelines, it reminds me a little bit of what the West Indies had back in the 80s and 90s...the reserve strength is very important in assessing a team's ability," he said. 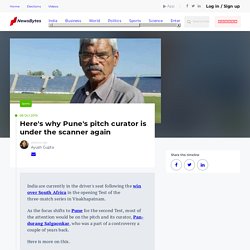 As the focus shifts to Pune for the second Test, most of the attention would be on the pitch and its curator, Pandurang Salgaonkar, who was a part of a controversy a couple of years back. Here is more on this. Salgaonkar was under scanner in 2017 for poor pitch It was in 2017 when Salgaonkar was under the scanner first, as a Test between India and Australia ended within three days, with 31 wickets being claimed by the spinners. Moreover, Salgaonkar was also caught red-handed in a sting operation by India Today TV channel, after he was seen attempting doctoring the pitch. He was later suspended for six months by the ICC. Won't be talking to the media about the pitch: Salgaonkar "I'm looking after the Gahunje wicket for the South Africa Test. India vs SA: Record-breaking Rohit smashes second successive ton. India's senior cricketer Rohit Sharma has eased into a new chapter as an opener in Test cricket. 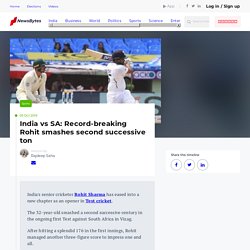 The 32-year-old smashed a second successive century in the ongoing first Test against South Africa in Vizag. After hitting a splendid 176 in the first innings, Rohit managed another three-figure score to impress one and all. BBC Sport - Tennis. Liverpool vs Leicester City: Preview, Dream11 and more. Premier League 2019-20 leaders Liverpool are up against Leicester City in a crunch match at Anfield on Saturday. 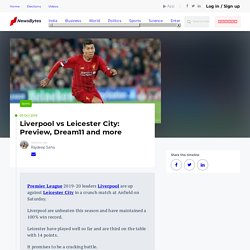 Liverpool are unbeaten this season and have maintained a 100% win record. Leicester have played well so far and are third on the table with 14 points. It promises to be a cracking battle. Here's the complete match preview. The Hundred draft: Everything you need to know. The England Cricket Board (ECB) came up with an announcement last year that a new format of the game would begin in 2020. 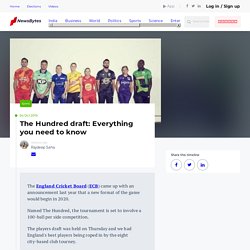 Named The Hundred, the tournament is set to involve a 100-ball per side competition. The players draft was held on Thursday and we had England's best players being roped in by the eight city-based club tourney. Here's more. Men's and women's Hundred: Teams and schedule A total of eight teams that are set to take part in The Hundred are, Birmingham Phoenix, London Spirit, Manchester Originals, Northern Superchargers, Oval Invincibles, Southern Brave, Trent Rockets and Welsh Fire.

Notably, besides the men's tournament, the women cricketers will also be part of the event. Anil Kumble in contention to be KXIP head coach: Report. The speculations surrounding the next head coach of Indian Premier League (IPL) franchise Kings XI Punjab has gained momentum. 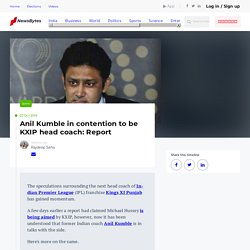 A few days earlier a report had claimed Michael Hussey is being aimed by KXIP, however, now it has been understood that former Indian coach Anil Kumble is in talks with the side. Here's more on the same. KXIP to make final decision soon As per a report in Mumbai Mirror, former Team India coach Kumble is in talks with the Punjab outfit and a final decision over the team's next head coach will be taken when the board of the franchise meets soon. Moreover, Kumble might table a meeting with the franchise owners as well. Champions League, gameweek 2: Here are the Key takeaways. Gameweek 2 of the UEFA Champions League 2019-20 season lived up to expectations of a thrilling night of football. 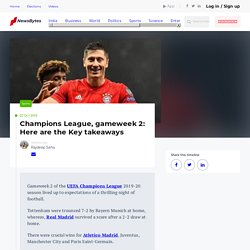 Tottenham were trounced 7-2 by Bayern Munich at home, whereas, Real Madrid survived a scare after a 2-2 draw at home. There were crucial wins for Atletico Madrid, Juventus, Manchester City and Paris Saint-Germain. ESPN: The Worldwide Leader In Sports. India vs SA: Openers Rohit, Mayank script this special record.

Indian Test openers Rohit Sharma and Mayank Agarwal walked out to bat for the first time together and immediately scripted a special record. 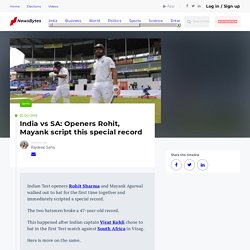 The two batsmen broke a 47-year-old record. This happened after Indian captain Virat Kohli chose to bat in the first Test match against South Africa in Vizag. Here is more on the same. The record and what happened in 1971? Rohit and Mayank became the first Indian opening pair in 47 years to play their first match on home soil. The last time this happened for India was when Sunil Gavaskar and Ramnath Parkar opened the innings way back in 1972 in Delhi against England. Parkar was making his Test debut, whereas, Gavaskar was playing his first match as an opener on home soil. The story of these two prior to this Test. Jasprit Bumrah: Latest News, Timelines, Photos, Videos - NewsBytes. La Liga, Atletico vs Real: Preview, Dream11 and more. La Liga braces for a cracking Madrid derby on Saturday with Atletico hosting arch-rivals Real. 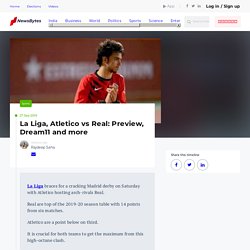 Real are top of the 2019-20 season table with 14 points from six matches. Atletico are a point below on third. It is crucial for both teams to get the maximum from this high-octane clash. Ahead of the 223rd Madrid derby, we present the match preview. Atletico focused on the derby. Yuvraj wants Rohit as India's T20I captain: Here's why. Yuvraj Singh has batted for Rohit Sharma to be the T20I captain for the Indian cricket team. The southpaw wants Rohit at the helm to ease the pressure on Virat Kohli, who is leading India across all three formats. Yuvi said if Kohli is feeling overloaded, then Team India should try out Rohit as skipper in T20Is. Sports - CBSSports.com Sports News, Fantasy Scores, Sports Video. Dropped despite clearing Yo-Yo Test. But why? Yuvraj Singh questions.

Virat Kohli: Latest News, Timelines, Photos, Videos - NewsBytes. Rohit aiming to warm-up for Test opening slot against SA. Rohit Sharma will be the focus in the three-day warm-up match against South Africa, starting Thursday. The senior cricketer will lead the Board President's XI against the Proteas ahead of the three-match Test series from October 2 onwards. La Liga: Messi suffers thigh problem in Barca's 2-1 victory. Lionel Messi, who made his first start for Barcelona in the 2019-20 season after returning from a calf injury, was replaced after half-time as the forward suffered a thigh problem.

Messi made his 400th La Liga start for the Spanish champions but things once again went awry for him. However, Barca beat Villarreal 2-1. Here's more on the same. Messi replaced by Dembele as Barca win 2-1 Messi made an assist for Antoine Griezmann with a floating corner in the sixth minute. Seven minutes later, Arthur made it 2-0 after collecting the ball from 30 yards out. Messi took treatment on the sideline after suffering the injury before carrying on until half-time. Just at the stroke of half-time, Santi Cazorla pulled one back. NFL.com. Neymar might join this Premier League club: Details here. WWE: Instances when superstars got hit with their own finishers.

Federer, Zverev hand Team Europe 3-1 lead at Laver Cup. Vintage Swiss ace Roger Federer combined with Germany's Alexander Zverev to claim a hard-fought doubles victory over Jack Sock and Denis Shapovalov at the Laver Cup. Their win gave Europe a 3-1 lead over Team World after the opening day of the third Laver Cup in Geneva. This is a crucial moment for Team Europe. Here are the details. Federer, Zverev seal the deal This is a very special night for me, says Federer. Faf du Plessis to miss flight to India: Here's why. Foot Mercato : Info Transferts Football - Actu Foot Transfert. Afridi blames IPL for Lankans opting out of Pakistan tour. Former Pakistan cricket team legend Shahid Afridi has made a bizarre claim. He has blamed the Indian Premier League for Sri Lankan players opting out of Pakistan tour scheduled to start from September 27 onwards. This comes after 10 Lankan players pulled out of the tour citing security reasons.

Dada, who earlier said Dhoni should decide himself if he can win matches for Team India, has now stated that captain Virat Kohli and the selectors should make the decision on MSD. Here are the details. Let them make the decision, says Dada "I don't know what the selectors think, what Virat [Kohli] thinks. They are the important persons, let them make the decision," Ganguly was quoted as saying by PTI. The status of MS Dhoni since the 2019 World Cup Dhoni was last seen during the ICC World Cup 2019. Since then, he missed out on the limited-overs series against West Indies away from home. A look at Steve Smith's records following 27th Test fifty. WWE: Instances when fans invaded the action live on air. I would have been thrilled if Neymar came back: Messi.