The Three-Act Structure. The 3-act structure is an old principle widely adhered to in storytelling today. 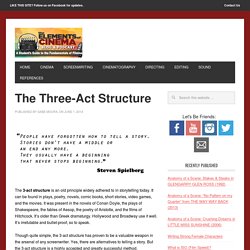 It can be found in plays, poetry, novels, comic books, short stories, video games, and the movies. It was present in the novels of Conan Doyle, the plays of Shakespeare, the fables of Aesop, the poetry of Aristotle, and the films of Hitchcock. Creativebloq. When it comes video or movie production, there are usually hundreds tasks to tick off, but one of the most indefinable – and therefore often the most challenging – can be setting the right mood. 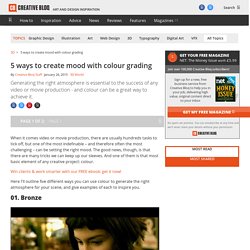 The good news, though, is that there are many tricks we can keep up our sleeves. And one of them is that most basic element of any creative project: colour. Win clients & work smarter with our FREE ebook: get it now! Here I'll outline five different ways you can use colour to generate the right atmosphere for your scene, and give examples of each to inspire you. 01. 5 ways to create mood with colour grading. Colour In Storytelling. Why Did Soap Operas Look Different From Other TV Shows? Soap operas, "soaps" or "my stories," as many a grandmother has called them, are dramas presented in a serial format on daytime television or radio. 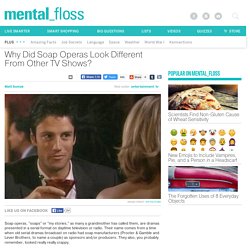 Their name comes from a time when old serial dramas broadcast on radio had soap manufacturers (Procter & Gamble and Lever Brothers, to name a couple) as sponsors and/or producers. They also, you probably remember, looked really really crappy. There are two main reasons for this lack of visual quality, both of which were rooted in the problem of soap operas' time slots and scheduling. Daytime TV shows generally don't pull in as much advertising revenue as evening programs, and many soap operas air daily instead of weekly, so low budgets, short production times and quick turnaround are the name of the game. The Lighting Game. Best of Pissed Phil Mitchell. 'BAFTA for Phil Mitchell': EastEnders viewers praise Steve McFadden after 'amazing' performance during drunken digger scenes. EastEnders star Steve McFadden has been praised by BBC One viewers for his drunken antics as Phil Mitchell. 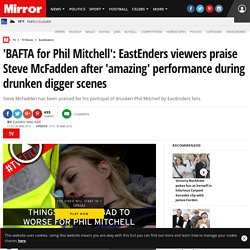 In Tuesday night's instalment from the BBC One soap Phil was left devastated after realising he might have killed his own daughter, Louise, after a drunken rampage with a digger . The Walford legend - who has been played by McFadden since his first appearance on 20 February 1990 - caused chaos in Albert Square following an explosive falling out with son Ben and estranged wife Sharon. Clearly intoxicated and complete with a bottle of whiskey in his hand, he destroyed The Arches after convincing himself that his family were out to steal the business from him.

What is the average film budget? I spoke at The Data Summit last week and gave a room full of technology experts a by-the-numbers tour of the UK film industry. 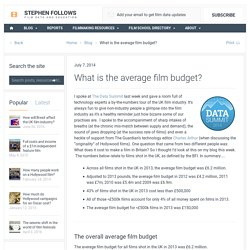 It’s always fun to give non-industry people a glimpse into the film industry as it’s a healthy reminder just how bizarre some of our practises are. I spoke to the accompaniment of sharp intakes of breaths (at the chronic mis-match between supply and demand), the sound of jaws dropping (at the success rate of films) and even a heckle of support from The Guardian’s technology editor Charles Arthur (when discussing the “originality” of Hollywood films). One question that came from two different people was: What does it cost to make a film in Britain? So I thought I’d look at this on my blog this week. The numbers below relate to films shot in the UK, as defined by the BFI. The Color Psychology of Pink. Color psychology suggests that different colors can have an impact on our moods, feelings, and even behaviors. 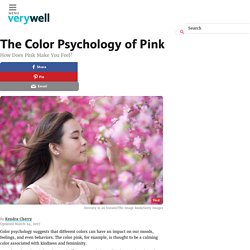 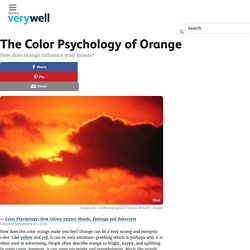 Orange can be a very strong and energetic color. Like yellow and red, it can be very attention-grabbing which is perhaps why it is often used in advertising. The Color Psychology of Brown. How does the color brown make you feel? 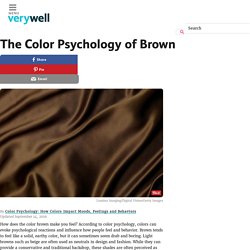 According to color psychology, colors can evoke psychological reactions and influence how people feel and behavior. Brown tends to feel like a solid, earthy color, but it can sometimes seem drab and boring. Light browns such as beige are often used as neutrals in design and fashion. Color Psychology of Purple - Impact on Mood and Behavior. Color psychology suggests that colors can have a powerful impacts on our moods and even behaviors. 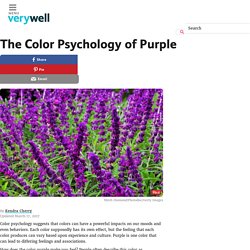 Each color supposedly has its own effect, but the feeling that each color produces can vary based upon experience and culture. Purple is one color that can lead to differing feelings and associations. Color Psychology of Yellow - Its Impact on Mood. The color yellow can be bright and intense, which is perhaps why it can often invoke such strong feelings. 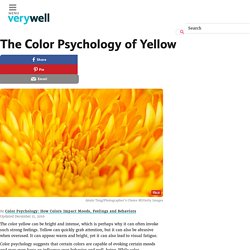 Yellow can quickly grab attention, but it can also be abrasive when overused. It can appear warm and bright, yet it can also lead to visual fatigue. Color psychology suggests that certain colors are capable of evoking certain moods and may even have an influence over behavior and well-being. While color associations can be influenced by a number of different factors, including past experiences and cultural associations, some colors do tend to evoke certain moods or feelings. Green in Color Psychology: How Does Green Make You Feel?

Color psychology suggests that different colors can evoke psychological reactions. For example, color is often thought to have an impact on moods and emotions. Sometimes these reactions are related to the intensity of a color, while in other cases they are the product of experience and cultural influences. How does the color green make you feel? For many people, it immediately brings to mind the lush green of grass, trees, and forests. Perhaps because green is so heavily associated with nature, it is often described as a refreshing and tranquil color. Blue in Color Psychology - Impact on Mood. How does the color blue make you feel? People have long believed that certain colors can evoke different moods and feelings, and some research has supported the idea that colors can have psychological effects. Blue is a color often found in nature such as the pale blue of a daytime sky or the rich dark blue of a deep pool of water.

The Color Psychology of Red. How does the color red make you feel? Red is often described as warm, vibrant, and intense. It is often seen as an exciting and even aggressive color, but it can also evoke feelings of love and comfort. Color Psychology - White. How does the color white make you feel? Many people find white serene and pure, while others feeling that it is stark and cold. One thing to remember is that such color associations are not necessarily universal.

Colors can have different meanings, symbolism, and associations in other cultures. The Color Psychology of Black. Black is real sensation, even if it is produced by entire absence of light. The sensation of black is distinctly different from the lack of all sensation. -Hermann von Helmholz The Color Psychology of Black Black absorbs all light in the color spectrum.Black is often used as a symbol of menace or evil, but it is also popular as an indicator of power. Color Psychology: Does It Affect How You Feel? Color Palettes From Famous Movies Show How Colors Set The Mood Of A Film. Light Source: In the Mood? Creating Mood with Light. The Camera Angles You Need To Know - Empire. Becoming a Casting Director - The CDG. Creative Skillset. Storyboarding Tips from DreamWorks. Storyboarding Your Film - dummies. 15 Movie Storyboards: See the Early Conceptions of Your Favorite Movie Scenes. Screenwriting Tips: How to Approach Genre as You Begin Your Script. Genre. CRAFT: Choosing Movie Genres - The Secret to Your Screenwriting Success.