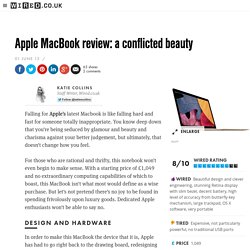 You know deep down that you're being seduced by glamour and beauty and charisma against your better judgement, but ultimately, that doesn't change how you feel. For those who are rational and thrifty, this notebook won't even begin to make sense. Design and hardware In order to make this MacBook the device that it is, Apple has had to go right back to the drawing board, redesigning mechanisms and components with intense precision to make sure every piece of the puzzle fits perfectly and that there's no wasted space.

Performance and features Connectivity and battery Screen. Apple's new iPad 3 – review. In answer to your first question: yes, there is a difference. 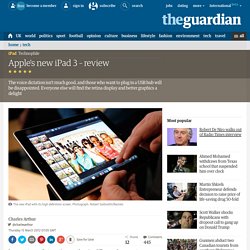 In answer to your second: yes, you can actually see the difference. It's subtle, and yet it's definitely there. I'm talking, of course, of the "Retina Display" on the new iPad (which is what Apple seems to be calling it – no marketing niceties such as "iPad 3" or "iPad HD"). With much fanfare, Tim Cook unveiled it last week and the world said "wow! " or "is that all? " So the key question is whether the new iPad is "wow! " WatchOS 2 review: Apple Watch's true 'killer feature' is its operating system. 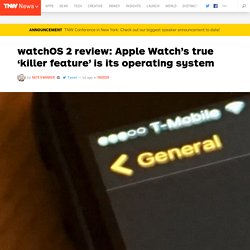 If you’ve not downloaded your new software yet, here’s a primer on what’s new, what’s better and how you’ll be interacting with your new watch. Customization You can now choose a time-lapse photos for your watch face, taken at various locations across the globe. As you raise your wrist and the watch face activates, the timelapse photo — which is more like a non-looping GIF — plays. There’s also the option to have a picture from your gallery as the background, or have Apple Watch display a new picture from a folder in your gallery each time you raise your wrist. You can also send more colorful drawings with a new color picker, and add a new circle of friends. Some watch faces also let you alter the color of text, which match the new watch bands.

Apps and Complications. Apple News app scores exclusive "BIG" content from Wired as iOS 9 hits 36% adoption in 3 days. Apple News, an ambitious news-reading app that's new to iOS 9, is already showing off exclusive original content to early adopters of the latest software for iPhones and iPad, demonstrating Apple's serious intent to woo both readers and publishers with a captivating medium for the written word. 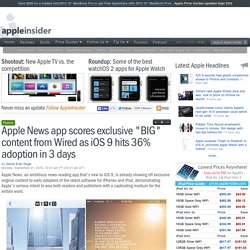 Apple News feature by Wired Apple News is a new app in iOS 9 that presents continuously updated news and features from "top news organizations and indie publications," allowing readers to follow specific news sources or subjects and categories ranging from business, tech, sports, fashion and politics. Readers can explore featured content or search for news on specific events or topics; the new app then refines relevant suggestions based on the user's interests. Samsung plans to follow Apple's lead again, offer smartphone financing program. By Neil Hughes Monday, September 21, 2015, 05:27 am PT (08:27 am ET) As carriers look to move away from contract subsidies, Apple has begun offering its own iPhone installment plan, and rival Samsung may opt to do the same, according to a new report. 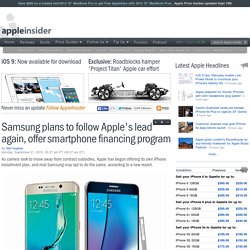 Citing an industry executive familiar with Samsung's plans, Fortune reported that Samsung plans to launch a smartphone leasing program "in the next several months," or perhaps sooner. Such a move would make it easier for users to spread the cost of a new Samsung phone out over a period of time, rather than paying hundreds of dollars up front. For years, particularly in the U.S., new smartphone purchases were accompanied by a two-year service contract which allowed handset makers like Apple and Samsung to offer their devices at what appeared to be a low price, like $199, even though the actual price of the smartphone was around $650. Apple releases fixed watchOS 2 for Apple Watch with native apps, Time Travel, nightstand mode. 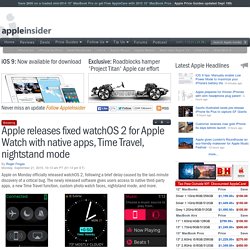 First iPhone 6s delivered three days before rest of the world gets it - and owner shares everything. Apple fans the world over have to wait until Friday, September 25 to get their hands on the iPhone 6s or iPhone 6s Plus . 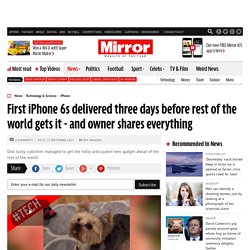 Well, apart from one San Diego-based visual designer. Adrienne Alpern has mysteriously received her brand new iPhone 6s in the post three days ahead of schedule. And she wasted no time in spilling the details of her new gadget slab on Twitter. She posted pictures of Apple's new smartphone in and out of its packaging, uploaded some 4K video taken with the phone (see above) and even shared some technical benchmarks. The most interesting tidbit to come from the benchmark results is that the iPhone 6s boasts 2GB of Random Access Memory (RAM). Until now, Apple has steadfastly refused to boost the 1GB of RAM that all previous iPhones have used - despite many Android smartphones offering up to 4GB of RAM. 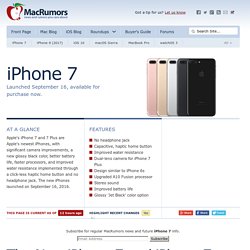 Apple wins appeal over smartphone patents - BBC News. Image copyright Reuters Samsung could be forced to stop selling some phones after Apple won an appeal in a US court. 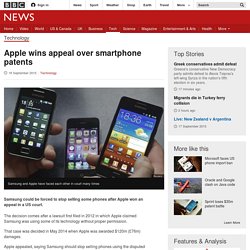 The decision comes after a lawsuit first filed in 2012 in which Apple claimed Samsung was using some of its technology without proper permission. That case was decided in May 2014 when Apple was awarded $120m (£76m) damages. Apple appealed, saying Samsung should stop selling phones using the disputed features. Judges disagreed but this latest ruling overturns that decision.

Apple's bid to stop Samsung selling some handsets was initially denied because the judges overseeing the case said the company had not demonstrated it had suffered significant harm from the infringement. Apple's app store hacked by malware in China in its first major cyber attack. Apple - The latest on Apple. Apple App Store attack - are you safe? - BBC News. Image copyright Getty Images Malicious code has been found in dozens of popular apps in Apple's App Store exposing perhaps millions of people to data theft and phishing. 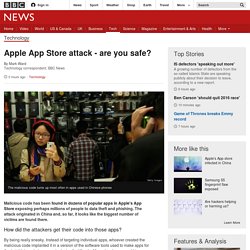 The attack originated in China and, so far, it looks like the biggest number of victims are found there. How did the attackers get their code into those apps? By being really sneaky. Apple refunding all purchases of Peace. Apple notified me this afternoon that they’ll be proactively refunding all purchases of Peace. It will probably take a few days to process. As far as I know, this effectively never happens. When I decided to pull the app, I asked some Apple friends if this was even possible, and we all thought the same thing: iTunes billing works the way it works, period, and no special cases can be made. One of the ways it works, which most customers don’t know, is that developers have no ability to issue refunds. I had to tell people to individually request refunds from Apple, which is not only a clunky process but also left me with the question of whether it was right to keep the remaining money from it, or what to do with it if not — a question that I don’t think has a widely agreeable “right” answer.

Apple (United Kingdom) - Hot News. App Store Hack: A list of iPhone apps infected with malware. Apple fans have been criticizing Android for years, fighting back against “walled garden” claims by suggesting that Android’s open nature makes it far more susceptible to hacks and malware. This is indeed often the case, but if you think Apple’s closed iOS app ecosystem isn’t also vulnerable to attacks, think again. Millions upon millions of iPhone and iPad users were affected by a major App Store hack that was just uncovered, and now we have a list of some of the apps that have reportedly been infected with malware.

Judge approves $415 million settlement in Apple and Google employee poaching scandal. The $415 million settlement put forward by Apple, Google, Adobe, Intel, and other Silicon Valley companies over employee-hiring practices has been tentatively approved by the federal judge dealing with the case. Judge Lucy Koh rejected the first proposed settlement, worth $324 million, in August last year, saying that it wasn't high enough to make up for the lost wages employees may have suffered after the companies involved in the case allegedly set up no-poaching agreements that allowed them to set and limit wages.

Koh signed off on the latest deal after the companies involved in the case — including Pixar, Lucasfilm, and Intuit — agreed to increase the amount they paid in compensation. In August 2014, she had suggested that the companies involved bump the figure up to at least $380 million, saying that there was "ample evidence of an overarching conspiracy" between the companies. Apple investigates new claims of China factory staff mistreatment. Apple has been accused of benefiting from the exploitation of more than 70,000 Chinese factory workers in conditions described as even worse than those at Foxconn, the supplier hit by employee suicides and accusations of excessive working hours. The iPhone and iPad maker is accused of breaching its promise to improve working conditions after the Foxconn revelations by using another supplier alleged to have broken 86 labour laws, including forcing pregnant women to work 11 hours a day, six days a week, standing up.

The US-based human rights watchdog China Labour Watch (CLW) also accused the company in question, Pegatron, of employing underage staff and discriminating against applicants shorter than 4ft 11in, older than 35 or from certain ethic minorities. The fresh claims of worker mistreatment are particularly embarrassing for Apple after it switched some iPhone and iPad manufacturing from Foxconn to Pegatron after intense negative publicity surrounding Foxconn. Apple removes malicious programs after first major attack on app store. Apple has had to remove more than 300 malware-infected apps from its app store after a tainted version of its developer tools led to a number of Chinese apps leaking users’ personal information to hackers.

The company confirmed on Sunday night that it was removing the apps after several cybersecurity firms reported finding a malicious program dubbed “XcodeGhost” that was embedded in hundreds of legitimate apps. It is the first reported case of large numbers of malicious software programs making their way past Apple’s stringent app review process. Prior to this attack, a total of just five malicious apps had ever been found in the app store, according to cybersecurity firm Palo Alto Networks. Apple said the hackers embedded the malicious code in these apps by convincing developers of legitimate software to use a tainted, counterfeit version of Apple’s software for creating iOS and Mac apps, which is known as Xcode. “Developers are now a huge target,” he added. Apple is building an electric car for launch in 2019, claims report. Firm is tripling number of engineers on the project, code-named TitanClaim made by unidentified sources in a Wall Street Journal reportApple recently confirmed that it met with the California Department of Motor Vehicles to discuss laws surrounding autonomous vehiclesBut the first car to be launched won't be self-driving, the sources say By Ellie Zolfagharifard For Dailymail.com.