School district pulls ’13 Reasons Why’ book from libraries. 9 of the Best Australian Contemporary Young Adult novels – Better Reading. YA author Steph Bowe chooses the cream of the crop in recent Australian YA releases that can be read by teenagers and adults alike! 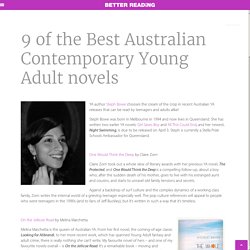 Steph Bowe was born in Melbourne in 1994 and now lives in Queensland. She has written two earlier YA novels: Girl Saves Boy and All This Could End, and her newest, Night Swimming, is due to be released on April 3. Steph is currently a Stella Prize Schools Ambassador for Queensland. The 10 Best Young Adult Books of 2016. 17 of the Most Exciting YA Books to Read in 2017. Guardian children's fiction prize 2016, the longlist – in pictures. 2016 Margaret A. Edwards winner David Levithan talks about his work and craft. Photography by Marty Umans National Book Award longlister and Lambda Literary Award winner David Levithan is willing to go to great lengths for his craft. 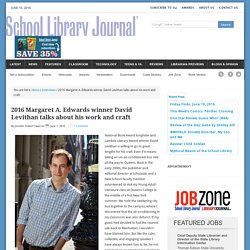 Even if it means taking an un-air-conditioned bus ride all the way to Queens. Back in the early 2000s, the publisher and editorial director at Scholastic and a New School faculty member volunteered to visit my Young Adult Literature class at Queens College in the middle of a hot New York summer. Book an appointment: doctors to prescribe novels in new scheme. Doctors will be able to prescribe novels such as The Perks of Being a Wallflower and The Curious Incident of the Dog in the Night-Time to teenagers with mental-health issues thanks to a new scheme, which launches today. 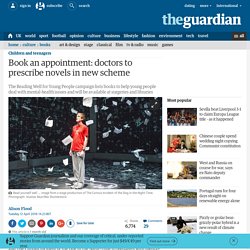 Delivered by charity The Reading Agency and the Society of Chief Librarians, the Reading Well for Young People campaign is aimed at 13- to 18-year-olds, and provides them with a recommended reading list covering mental health issues from depression to eating disorders, and from anxiety to self-harm, bullying and exam pressure. Chosen by mental health experts and young people, the books, a mix of self-help, memoir and fiction, can be recommended by GPs, counsellors and school nurses, and the list of titles will also be available to borrow from public libraries. Great reads for tweens becoming teens. Bridging the gap between middle fiction books and young adult books can be tricky for readers. 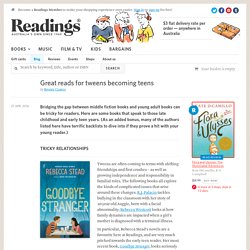 Here are some books that speak to those late childhood and early teen years. 8 Modern YA Novels to Pair With Classroom Classics. Young-adult fiction: What's in store for the year ahead. Will Kostakis' The Sidekicks deals with complicated male friendships. 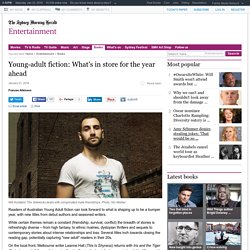 Photo: Nic Walker Readers of Australian Young Adult fiction can look forward to what is shaping up to be a bumper year, with new titles from debut authors and seasoned writers. 5 YA Couples that Left Me Breathless This Year. There’s something I love about a romance between teenagers. 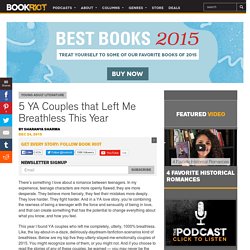 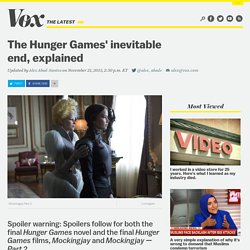 Mockingjay — Part 2, the fourth and final movie in the series, is now in theaters. It's the grand conclusion to one of the most prosperous and influential franchises in entertainment history, one that ranks right alongside Twilight and Harry Potter, as well as Star Wars and Marvel's Cinematic Universe. In terms of US box office success, Catching Fire is 12th most successful movie of all time in domestic gross, outpacing movies like Iron Man 3, The Lion King, Spider-Man, Jurassic Park, Frozen, and Harry Potter and the Deathly Hallows Part 2.

The franchise is one of the most ambitious, informative pieces of art about war and violence aimed at young adults. The Banned Books We Love. Every year during Banned Books Week, libraries around the country take the opportunity to acknowledge that censorship is still a problem in the United States. 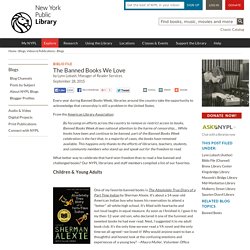 From the American Library Association: By focusing on efforts across the country to remove or restrict access to books, Banned Books Week draws national attention to the harms of censorship.... Northern Lights by Philip Pullman as a graphic novel – in pictures. If you like books like these: crime fiction for teens. As someone who has been reading YA for years, long before I sat down to write a book of my own, it was less of a surprise and more of a relief to read that, according to a Bowker Market Research survey published earlier in the month, 55% of buyers of YA books are over 18. 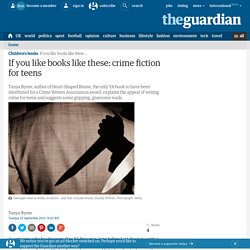 Why? I take it you're looking for an answer more profound than: because they're brilliant. It's easy to dismiss books for teenagers as books about teenagers. 6 YA Novels to Read if You Loved PAPER TOWNS. Write of Passage: Growing Up with Morris Gleitzman. When it comes to writing stories for children and young adults, is anything off limits? 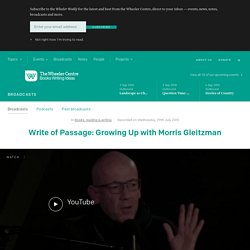 For the past decade, in the Once series, bestselling children’s author Morris Gleitzman has been telling the story of Felix, a Jewish boy struggling to survive during the Holocaust. Teen Books Online. 20 Classic YA Literature Heroines, Ranked. This week, The Book of Jezebel comes out, and you should order it immediately — which I say because I was one of its contributors but also because it’s great — a desk reference of every bit of feminist trivia you could want. In particular, I think it’d make a great gift for young teenagers who are still coming up and learning about feminist reads on popular culture. But let’s face it: no one starts with an encyclopedia, in evaluating these things; you start with the books girls are given as young’uns, and, troublesome lot that they are, those titles give you models of feminine behavior and independence to measure yourself against.

It’s a testament to their formative importance that women, well into their adult lives, insist that these characters shaped the way they saw themselves and the world. So for a bit of fun in ye olde Jezebel spirit, here are the classic girl heroines of literature, ranked, from a 2013 vantage. 20. 100 Greatest Children’s Books According To New York City Library. NEW YORK (AP) – Beloved authors Judy Blume and Eric Carle helped the New York Public Library celebrate children’s literature Monday as the library released a list of 100 great books from the last 100 years.

The list includes picture books for preschoolers as well as books for older readers like “The Hobbit” and “Harry Potter and the Sorcerer’s Stone.” 74 Books to Read if You Love the Hunger Games. If you haven't read the Hunger Games you really should! They're pretty awesome. Quickfire interview: Eoin Colfer. What is your favourite book? My favourite book this week is The Sisters Brothers by Patrick deWitt.