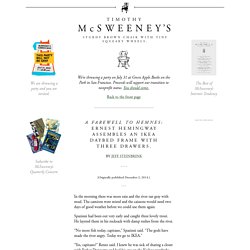 In the morning there was more rain and the river ran gray with mud. The camions were mired and the caissons would need two days of good weather before we could use them again. Spazinni had been out very early and caught three lovely trout. He layered them in his rucksack with damp rushes from the river. “No more fish today, capitano,” Spazinni said. “Yes, capitano?” “Spazinni,” I said, “gas up the barattare.” At IKEA we behaved foolishly. Later in the afternoon an altercation broke out in the kitchenwares. I told her it would please me to take the Hemnes daybed frame with three drawers. The morning brought more rain. In Defense Of Adverbs  Like like and other filler words, certain adverbs have saturated our speech and our writing, making once-meaningful phrases seem totally vapid. 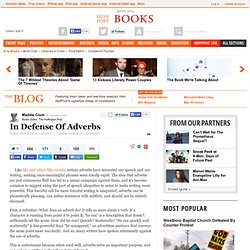 The idea that adverbs are just extraneous fluff has led to a smear campaign against them, and it's become common to suggest axing the part of speech altogether in order to make writing more powerful. This forceful call for more forceful writing is misguided; adverbs can be phonetically pleasing, can imbue sentences with subtlety, and should not be entirely shunned. First, a refresher: What does an adverb do? It tells us more about a verb. If a character is running from point A to point B, "he ran" is a description that doesn't sufficiently set the scene. This is unfortunate because when used well, adverbs serve an important purpose, and can enhance writing rather than detract from it. A new writing app called Hemingway made the rounds last month, named so for its supposed ability to morph so-so essays into Moveable Feasts. Literature Without Style by Tim Parks. What is literary style and why is it bound to change as the novel rapidly goes global? 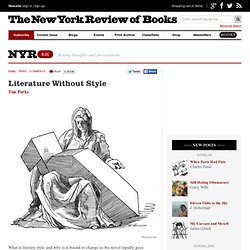 “Style is the transformation the writer imposes on reality,” Proust tells us. We know what he means, perhaps, but the claim hardly helps us describe how a style is created or how it achieves its effects. In fact I can think of no adequate definition of style, if only because it is always diffuse throughout a text. It cannot be pinned down or wrapped up. 100 Exquisite Adjectives.

Plenty of tired adjectives are available to spoil a good sentence, but when you find just the right word for the job, enrichment ensues. Practice precision when you select words. Here’s a list of adjectives: Subscribe to Receive our Articles and Exercises via Email You will improve your English in only 5 minutes per day, guaranteed! 21 Responses to “100 Exquisite Adjectives” Alternative authors. Alternative authors' versions of Lord of the Rings by Alison Brooks One of the cult novels of the 1970s turned out to be Lord of the Rings. 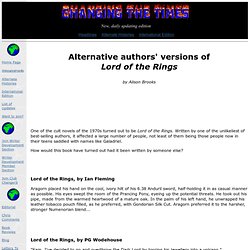 Written by one of the unlikeliest of best-selling authors, it affected a large number of people, not least of them being those people now in their teens saddled with names like Galadriel. How would this book have turned out had it been written by someone else? Lord of the Rings, by Ian Fleming Aragorn placed his hand on the cool, ivory hilt of his 6.38 Anduril sword, half-holding it in as casual manner as possible.

Ali Smith: Style vs content? Novelists should approach their art with an eye to what the story asks. Point 1: "What's it all about? 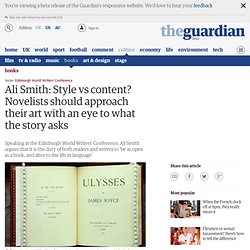 " v "What's it all – a bout? " Fight! Fight! Fight! In the style corner, a battered old copy of Ulysses. Or did he mean "Ulysses is a tweet"? Nothing is harmful to literature except censorship, and that almost never stops literature going where it wants to go either, because literature has a way of surpassing everything that blocks it and growing stronger for the exercise. Or maybe I'd read one of the most original writers at work in the novel in English right now, Nicola Barker. The Passive Voice. The Sound of a Sentence. Draft is a series about the art and craft of writing. 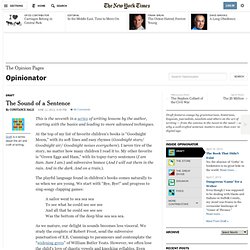 This is the seventh in a series of writing lessons by the author, starting with the basics and leading to more advanced techniques. At the top of my list of favorite children’s books is “Goodnight Moon,” with its soft lines and easy rhymes (Goodnight stars/ Goodnight air/ Goodnight noises everywhere). I never tire of the story, no matter how many children I read it to. My other favorite is “Green Eggs and Ham,” with its topsy-turvy sentences (I am Sam.

Sam I am.) and subversive humor (And I will eat them in the rain. The playful language found in children’s books comes naturally to us when we are young. A sailor went to sea sea sea To see what he could see see see And all that he could see see see Was the bottom of the deep blue sea sea sea. As we mature, our delight in sounds becomes less visceral. Recovering the love of language Language can still be an adventure if we remember that words can make a kind of melody.