Having trouble validating a form- Please help. Well Dear Melissa what i want to write now is for all Adobe Edge Animate Users like you First of all : The Idea for Adobe Edge Animate at first was a simple program for users to make just a banner but not a regular one, to create a special One So All Adobe Edge Animate Team didint make this program for you to making a Complete website with a form with validation or other special features that you can see on the other sites like parallax effects or anything else but a Simple/interactive great banner well, so if you want to do other things you should have knowledge about jQuery Program Language ! 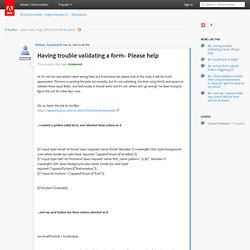 This means if you dont have it you cant have a complete website with all special features !! Second : Actually this link you wrote it in your message needs jQuery knowledge and this pluging has made with jQuery language why ? JSONLint - The JSON Validator. JavaScript: how to load dynamic contents (HTML String, JSON) to iframe – zome offzome off. The story Although people are suggesting the replacement of <iframe> by <div> due to the poor usability of <iframe>, there are still some cases that <iframe> is the only way to go. 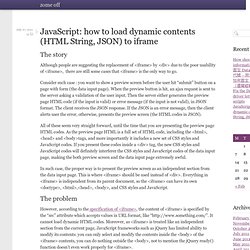 Consider such case : you want to show a preview screen before the user hit “submit” button on a page with form (the data input page). When the preview button is hit, an ajax request is sent to the server asking a validation of the user input. Then the server either generates the preview page HTML code (if the input is valid) or error message (if the input is not valid), in JSON format. The client receives the JSON response. All of these seem very straight forward, until the time that you are presenting the preview page HTML codes. In such case, the proper way is to present the preview screen as an independent section from the data input page. The problem. JSON is undefined in IE7 & IE6 · Issue #123 · maccman/juggernaut. Data-driven Edge Animate projects. This week I demonstrated Edge Animate to two cities in Texas as part of the Create the Web tour. 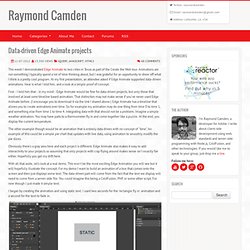 Animations are not something I typically spend a lot of time thinking about, but I was grateful for an opportunity to show off what I think is a pretty cool program. At my first presentation, an attendee asked if Edge Animate supported data-driven animations. Hear is what I told him, and a look at a simple proof of concept. First - I told him that - in my mind - Edge Animate would be fine for data-driven projects, but only those that involved at least some timeline based animation. That distinction may not make sense if you've never used Edge Animate before. The other example though would be an animation that is entirely data driven with no concept of "time". Obviously there's a gray area here and each project is different. With all that aside, let's look at a real demo.

I began by creating the animation and using static text. So now we have a basic animation done. That was easy. Edge Animate Tutorial: Dynamic Content using Ajax. Tutorial based onAdobe Edge Animate 1.5 I'm sorry but I don't have a Adobe CC license, so I cannot guarantee this works also on latest Edge Animate CC. 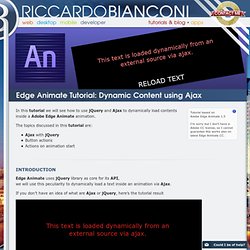 In this tutorial we will see how to use jQuery and Ajax to dynamically load contents inside a Adobe Edge Animate animation. The topics discussed in this tutorial are: Ajax with jQueryButton actionsActions on animation start Edge Animate uses jQuery library as core for its API, we will use this peculiarity to dynamically load a text inside an animation via Ajax. If you don’t have an idea of what are Ajax or jQuery, here’s the tutorial result Clicking on “RELOAD TEXT” a new string will be dynamically loaded from an external source. Create a text on the stage and set a dimension large enough to contain the dynamically loaded text, set the text name to “Placeholder”. Get() Description: Load data from the server using a HTTP GET request. 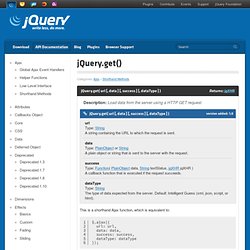 This is a shorthand Ajax function, which is equivalent to: The success callback function is passed the returned data, which will be an XML root element, text string, JavaScript file, or JSON object, depending on the MIME type of the response. It is also passed the text status of the response. As of jQuery 1.5, the success callback function is also passed a "jqXHR" object (in jQuery 1.4, it was passed the XMLHttpRequest object).

However, since JSONP and cross-domain GET requests do not use XHR, in those cases the jqXHR and textStatus parameters passed to the success callback are undefined. Ingesting External Data. Share this Episode Autoplay End of Video Show End Screen Default Quality Adjust your embed size below, then copy and paste the embed code above. 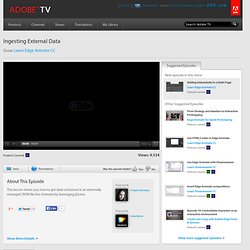 Community Translation Your transcript request has been submitted. Adobe TV does its best to accommodate transcript requests. Constructing a Slideshow. Share this Episode Autoplay End of Video Show End Screen Default Quality Adjust your embed size below, then copy and paste the embed code above. 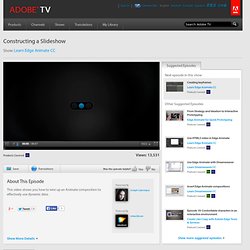