Time and strand in maori

Flashcards Table on Māori days, months and seasons. Days of the week in Maori. The Maori culture is a unique and special way of life. 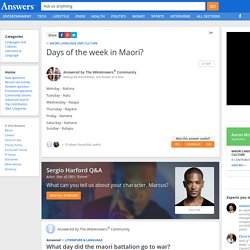 Maori language week is a very good way to try and revive, not only the language, but the way of life, passing on valuabl…e life lessons to the younger generations to try and keep a little of the Maori way of life. Actually I believe that the Maori culture and language is much stronger than it was 30 - 40 years ago when I was at school. I went to a school with many Maori students in my classroom and it was rare to hear anyone speak Te Reo but now I know many who are fluent in te Reo ( the Language) and not a few of these are European which is great.! My grand-daughter who is 1/4 Pacific Islander - i.e. not Maori - went to Kohanga Reo rather than Kindergarten and started school in a Bi-Lingual class. Maori People of Aotearoa / New Zealand - From Hawaiki to Hawaiki - Contents. 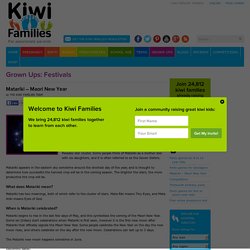 Discover the importance of Matariki, and explore ways that you can celebrate the Maori New Year with your family. Matariki is officially celebrated on 6 June 2016. What is Matariki? Māori phrasebook. Māori phrasebook The Māori language (Te Reo Māori) is cherished by the indigenous people of New Zealand, the Māori, as a treasure (taonga) and many Pākehā (non-Māori, non-polynesians) are now trying to learn it. 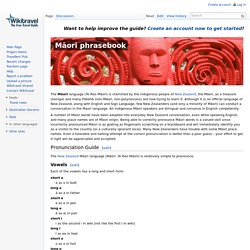 Although it is an official language of New Zealand, along with English and Sign Language, few New Zealanders (and only a minority of Māori) can conduct a conversation in the Maori language. All indigenous Māori speakers are bilingual and converse in English competently. A number of Māori words have been adopted into everyday New Zealand conversation, even while speaking English, and many place names are of Māori origin. Being able to correctly pronounce Māori words is a valued skill since incorrectly pronounced Māori is as grating as fingernails scratching on a blackboard and will immediately identify you as a visitor to the country (or a culturally ignorant local). Maori Culture New Zealand, Maori Culture, Traditions and Tourism. Today Maori people live throughout New Zealand, and many are actively involved with keeping their culture and language alive. 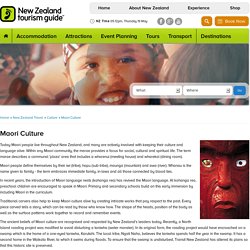 Within any Maori community, the marae provides a focus for social, cultural and spiritual life. The term marae describes a communal 'plaza' area that includes a wharenui (meeting house) and wharekai (dining room). Maori people define themselves by their iwi (tribe), hapu (sub-tribe), maunga (mountain) and awa (river). The Journey of the Maori to Aotearoa.

Hawaiki, the legendary homeland of the Maori peoples of Aotearoa/New Zealand, from whence we migrated to this land about 1000 years ago. 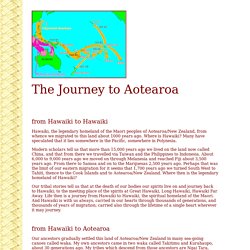 Where is Hawaiki? Many have speculated that it lies somewhere in the Pacific, somewhere in Polynesia. Modern scholars tell us that more than 15,000 years ago we lived on the land now called China, and that from there we travelled via Taiwan and the Philippines to Indonesia. History of the Māori language - Māori Language Week. In the last 200 years the history of the Māori language (te reo Māori) has been one of ups and downs. 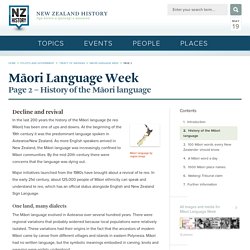 At the beginning of the 19th century it was the predominant language spoken in Aotearoa/New Zealand. As more English speakers arrived in New Zealand, the Māori language was increasingly confined to Māori communities. By the mid-20th century there were concerns that the language was dying out. Mythology and history - origin myths and folklore of ... In Polynesian mythology, people, the elements and every aspect of nature are descended from the one primal pair, the Sky Father and the Earth Mother. 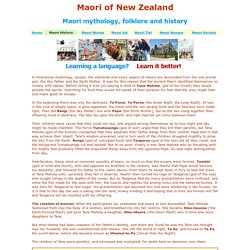 It was for this reason that the ancient Maori identified themselves so closely with nature. Before felling a tree (so slaying a child of Tane Mahuta, god of the forest) they would placate the spirits. Searching for food they would not speak of their purpose for fear that the prey might hear and make good its escape. In the beginning there was only the darkness, Te Ponui, Te Poroa (the Great Night, the Long Night). Ideas of Māori origins. A quick, easy summary Read the Full Story Early ideas When Europeans discovered New Zealand, they wondered about the origins of the Māori people. 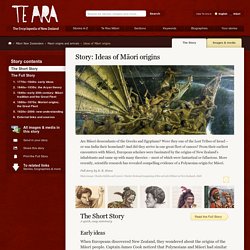 Captain James Cook noticed that Polynesians and Māori had similar appearances and cultures.