Richard Lazzara - #Prions, ​Simple amoeba can help fight Alzheimer – research. Eating meat and ignoring tomatoes is shown to have a dramatic effect on cancer incidence. (NaturalNews) If you were to ask the vast majority of young and middle-aged adults if the type of foods they regularly consume had any effect on their risk of developing a host of different forms of cancer, most would indicate a passive ignorance, as they blindly believe that risk is predetermined by their genetic makeup and they can do little (short of smoking cessation) to avoid the number two killer of men and women in the US. 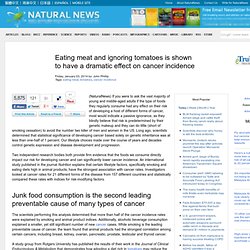 Long ago, scientists determined that statistical significance of developing cancer based solely on genetic inheritance was at less than one-half of 1 percent. Our lifestyle choices made over the course of years and decades control genetic expression and disease development and progression. Two independent research bodies both provide firm evidence that the foods we consume directly impact our risk for developing cancer and can significantly lower cancer incidence. Sources for this article include: Richard Lazzara - #prions. Normal Prion Protein Regulates Iron Metabolism. March 13, 2013 Aggregation in CJD likely leads to iron imbalance and brain cell death An iron imbalance caused by prion proteins collecting in the brain is a likely cause of cell death in Creutzfeldt-Jakob disease (CJD), researchers at Case Western Reserve University School of Medicine have found. 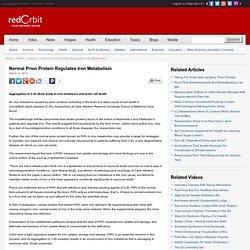 The breakthrough follows discoveries that certain proteins found in the brains of Alzheimer’s and Parkinson’s patients also regulate iron. The results suggest that neurotoxicity by the form of iron, called redox-active iron, may be a trait of neurodegenerative conditions in all three diseases, the researchers say. Further, the role of the normal prion protein known as PrPc in iron metabolism may provide a target for strategies to maintain iron balance and reduce iron-induced neurotoxicity in patients suffering from CJD, a rare degenerative disease for which no cure yet exists. 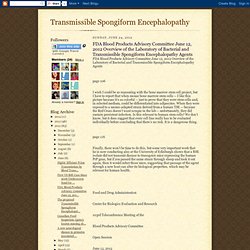 When they were exposed to a mouse-adapted strain derived from a human TSE -- because the Red Cross doesn’t want scrapie in the lab -- unfortunately, they did sustain persistent infection. Is this relevant to human stem cells? We don’t know, but it does suggest that every cell line really has to be evaluated individually before concluding that there’s no risk. Page 116 Food and Drug Administration Center for Biologics Evaluation and Research 103rd Teleconference Meeting of the Blood Products Advisory Committee Open Session. Mistaken Identity—Prion Disease or Alzheimer’s on Fast Forward? - AlzForum Alzheimer Research News. Though considered a strange beast in the grand scheme of brain disorders, could rapidly progressing dementia be more common than scientists think? 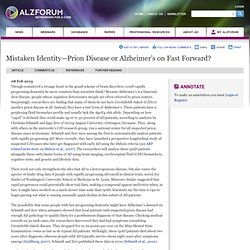 Because Alzheimer’s is a famously slow disease, people whose cognition deteriorates steeply are often referred to prion centers. Surprisingly, researchers are finding that many of them do not have Creutzfeldt-Jakob (CJD) or another prion disease at all. Nobel laureate to discuss brain injuries. Nobel Laureate Stanley Prusiner, a neurologist who discovered a class of infectious proteins that cause mad cow disease and related neurodegenerative ailments in animals and people, will present a free, public lecture Friday at UC Davis. Prusiner’s public talk, which begins at 5:30 p.m. in Freeborn Hall, will be titled “Brain Injuries: Soldiers, Football Players and Alzheimer’s Patients.” It is sponsored by the Dyar Lectureship program in the School of Veterinary Medicine. Earlier that day, Prusiner will present a more technical lecture for veterinary students on “The Molecular Biology of Mammalian Prions.” Where Is the Real Beef? I'm Mad As a Cow and Not Going to Take ... 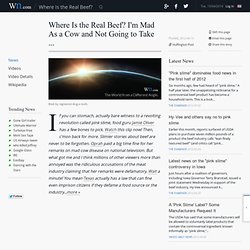 National Prion Disease Pathology Surveillance Center. Differential gene expression during prion infection. (9781244640559): Laura Rush Moody. Staring at a Map of the World - Phantoms of meat? Namibia Hereford Cattle Breeders Association. The history of the Hereford breed is as intriguing as the genetic mystery of the unique red and white colour pattern transmitted from generation to generation for more than two centuries. 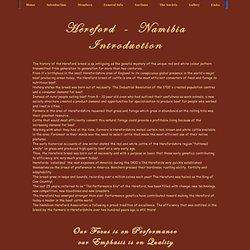 From it's birthplace in the small Herefordshire area of England to its conspicuous global presence in the world's major beef producing areas today, the Hereford breed of cattle is one of the most efficient converters of feed and forage to nutritious beef. History states the breed was born out of necessity. The Industrial Revolution of the 1700's created population centres and a consumer demand for beef. Instead of rural people eating beef from 8 – 10 year old oxen who had outlived their usefulness as work animals, a new society structure created a product demand and opportunities for specialization to produce beef for people who worked and lived in cities. Farmers in the area of Herefordshire reasoned that grass and forage which grew in abundance on the rolling hills was their greatest resource. Japan confirms case of mad cow disease - Health - Mad Cow in the U.S. TOKYO — Officials in Japan have confirmed the country's first case of mad cow disease in cattle raised to provide meat, an official of the Health Ministry said Friday. 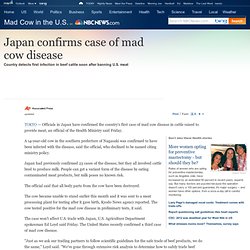 A 14-year-old cow in the southern prefecture of Nagasaki was confirmed to have been infected with the disease, said the official, who declined to be named citing ministry policy. Japan had previously confirmed 23 cases of the disease, but they all involved cattle bred to produce milk. People can get a variant form of the disease by eating contaminated meat products, but milk poses no known risk. The official said that all body parts from the cow have been destroyed. The cow became unable to stand earlier this month and it was sent to a meat processing plant for testing after it gave birth, Kyodo News agency reported.

The case won't affect U.S. trade with Japan, U.S. "Just as we ask our trading partners to follow scientific guidelines for the safe trade of beef products, we do the same," Loyd said. Mad Cow Disease - What the Government Isn't Telling You - by Dr. Lorraine Day, M.D. Facts about Bovine Spongiform Encephalopathy (BSE) Facts about Bovine Spongiform Encephalopathy (BSE) By: Larry Baumann, Extension Veterinarian, University of Wisconsin – River Falls/Extension What is BSE? 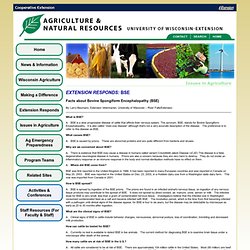 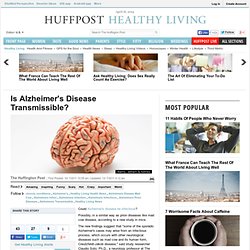 Possibly, in a similar way as prion diseases like mad cow disease, according to a new study in mice. The new findings suggest that "some of the sporadic Alzheimer's cases may arise from an infectious process, which occurs with other neurological diseases such as mad cow and its human form, Creutzfeldt-Jakob disease," said study researcher Claudio Soto, Ph.D., a neurology professor at The University of Texas Medical School at Houston, said in a statement. However, Sotos' study was just done in mice, and much more research is needed before the results can carry over into humans.

The study was published in the journal Molecular Psychiatry. Researchers took brain tissue from a human with Alzheimer's disease and injected it into the brains of mice, and found that they went on to develop plaques and changes in the brain that are indicative of Alzheimer's. UAE lifts ban on imports of Canadian cattle.