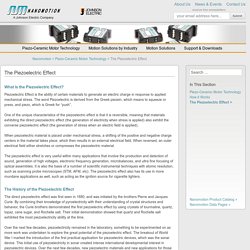 When piezoelectric material is placed under mechanical stress, a shifting of the positive and negative charge centers in the material takes place, which then results in an external electrical field. When reversed, an outer electrical field either stretches or compresses the piezoelectric material. Future cities may harvest energy from human footsteps - CNN. When looking at the amount of kinetic energy produced in the average metro station at rush hour, or even on the dance floors of nightclubs, harvesting electricity from human activity makes sense. 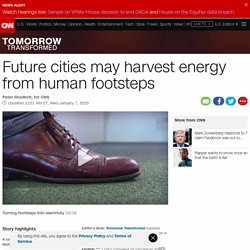 The technology that makes it possible -- the piezoelectric effect -- is more than 130 years old: in 1880, the brothers Jacques and Pierre Curie discovered that placing crystals under pressure produced an electric charge. Today, manufacturing technology has made it possible to place piezoelectric devices in the most unlikely places and one company, Pavegen, has developed power-generating systems for pavements, football fields and even school corridors. Warren Buffett’s Railroad. Warren Buffett's Railroad Warren Buffett's $5 Billion Railroad Stake…And How to Profit by Following in His "Tracks" by Matthew Weinschenk, Investment U Research Team Warren Buffett is arguably the greatest value investor the world has ever seen. 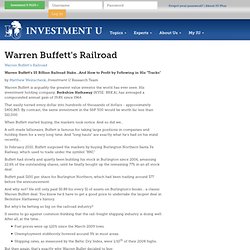 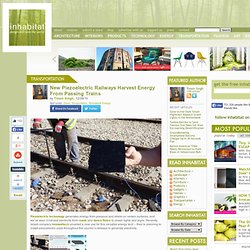 Recently Israeli company Innowattech unveiled a new use for this versatile energy tech – they’re planning to install piezoelectric pads throughout the country’s railways to generate electricity. The company has previously used piezoelectric pads on Israeli highways, and now they’re using similar (albeit larger) devices on railways.

Innowattech plans on substituting 32 standard railway pads with their own piezoelectric IPEG PADS, which are of a similar design. In addition to generating energy, the new IPEG pads can determine the size of the wheel that passes over them, as well as the speed and weight of the vehicle. Innowattech Alternative Energy Harvesting System Roads Solution. New Technology Harvests Electricity From Railroad Train Track Vibrations. Train photo from Shutterstock Anyone who has stood next to a train pulling into a station can attest to the immense power it produces as it rattles along the rails. 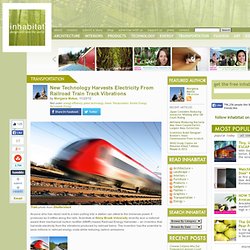 Scientists at Stony Brook University recently won a national award their mechanical motion rectifier (MMR)-based Railroad Energy Harvester – an invention that harvests electricity from the vibrations produced by railroad trains. The invention has the potential to save millions in railroad energy costs while reducing carbon emissions. The U.S. has the longest network of railroad tracks in the world – it spans 140,700 miles in total.

In The Netherlands, A New Spin On The Playground. Tiles May Help Shrink Carbon Footprint by Harnessing Pedestrian Power. Thomas K. 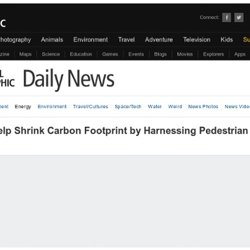 Grose in London. Civil engineers find savings where the rubber meets the road. A new study by civil engineers at MIT shows that using stiffer pavements on the nation’s roads could reduce vehicle fuel consumption by as much as 3 percent — a savings that could add up to 273 million barrels of crude oil per year, or $15.6 billion at today’s oil prices. 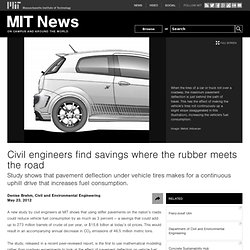 This would result in an accompanying annual decrease in CO2 emissions of 46.5 million metric tons. The study, released in a recent peer-reviewed report, is the first to use mathematical modeling rather than roadway experiments to look at the effect of pavement deflection on vehicle fuel consumption across the entire U.S. road network. 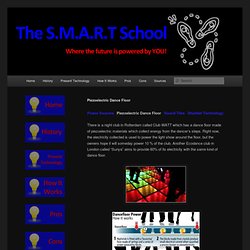 iPavement embeds WiFi hotspots in the street. iPavement paving stones are installed in existing sidewalks, to provide WiFi access to passers-by Image Gallery (2 images) It seems that a lot of people have been talking about putting things in the road lately. 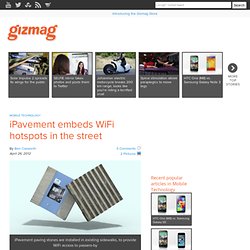 Just within the past few years, we’ve heard about asphalt-embedded parking spot locators, power strips and coils, piezoelectric generators, and heat-harvesting water pipes. Now, a Spanish tech company has developed yet another piece of “street technology,” known as iPavement – sidewalk paving stones that double as WiFi hotspots. Each stone measures 40 x 40 x 7 centimeters (15.75 x 15.75 x 2.76 in), weighs approximately 24 kilograms (53 lbs), and contains a 5 GB microprocessor that communicates with nearby mobile devices via WiFi and Bluetooth. Charge Your Phone With Your Shoes. A Kenyan man invented a shoe-powered charger for phones, joining other inventors in making mobile technology greener and more independent of traditional infrastructure. 24-year-old Anthony Mutua developed a thin crystal chip that fits into shoe soles and generates electricity under pressure. 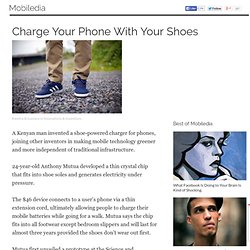 The $46 device connects to a user’s phone via a thin extension cord, ultimately allowing people to charge their mobile batteries while going for a walk. Mutua says the chip fits into all footwear except bedroom slippers and will last for almost three years provided the shoes don’t wear out first. Mutua first unveiled a prototype at the Science and Innovation Week in Nairobi and has since patented the idea in preparation for mass production. He predicts the device will prove popular as a commercial enterprise, as people can use it to charge several phones during one walk. Mutua’s chip joins similar cell phone charging inventions that may soon “greenify” the mobile market. Piezoelectric Traffic Surveillance System_WANJI Technology. System Overview Piezoelectric Traffic Surveillance System (WIF-I-862) is a new kind of traffic surveyor apparatus promoted by Wanji Tech., which conforms to Level I requirements of the latest standard about transportation devices ‘The Relevant Requirements, Measures and Outfield Detection & Operational Rules about Traffic Surveillance Equipment’.

With the detecting mode of piezoelectric, loop group, automatic classification (Level II classification requirements of motor vehicle) flow statistics and vehicle speed detection can be realized as well as providing axle load measurement, and all these can fully satisfy the requirements of expressway traffic surveillance conditions. Operational Principle System Layout. Piezoelectric Roads in Israel and California: Powering Up Cities as You Drive. Posted by Christian Crisostomo on March 25, 2012 · 5 Comments - Last modified: May 25, 2013 Photo Credit: heijmans.nl Development of roads and highways are just some of the most common construction projects that a city experiences every year. Volvo launches new D3 variants S60, S80 and XC60 - The Economic Times. With added silence and efficiency, the new variants of the Volvo S60, S80 and XC60 models with an all new 5-cylinder turbo D3 diesel engine will be priced at Rs 23.99 lakh, Rs 31.99 lakh and Rs 33.99 lakh (ex-showroom Delhi) respectively Volvo’s current three model range for India includes an entry level sports luxury sedan, a high-end prestige sedan and a rugged all-wheel drive SUV.

Even collectively the Swedish car maker’s “super safe” and highly efficient passenger vehicle trio have barely managed to make a dent in overall sales figures of their respective segments. Pavegen tiles harvest energy from footsteps. Pavegen tiles harvest kinetic energy from pedestrian traffic Image Gallery (6 images) Can you imagine the power of 50,000 steps a day? Well, Laurence Kembell-Cook, the director of Pavegen Systems imagined it and created Pavegen tiles - a low carbon solution that aims to bring kinetic energy harvesting to the streets.

T-Box Harnesses Wind Energy from Speeding Trains. Rail travel is one of the greenest means of traveling across the country, but it could be even more efficient if the infrastructure itself produced electricity. Companies have already come up with plans to harness energy from passing trains using piezoelectric pads, and now two designers have developed a device that could harness the wind energy produced by speeding trains. Will Israeli Traffic Recharge My iPod? Email Share 27 Email Share. Turn Weight, Motion, Vibration and Temperature into Electricity, Courtesy Innowattech! Innowattech Alternative Energy Harvesting System. The Cutting Edge News. Innowattech’s Rail Pad – IPEG PAD Harvest Energy From Passing Train. The Cutting Edge News. Eddy Grant's song Electric Avenue has come to life: An Israeli company Innowattech has built a technology that allows us to collect the mechanical energy created by cars, planes, and trains, and our feet walking on the surface of a sidewalk.

Innowattech breakthrough in alternative energy from road traffic. Innowattech- Seeking to Convert Mechanical Energy to Electrical Energy. The Nassau Guardian. The landscape of power production, I believe and hope, has changed for good. If we are looking for technologies that are more responsible and can give individual nations more control and security about their power supply, there is much to be positive about. Innowattech's Channel. Innowattech Alternative Energy Harvesting System Roads Solution.