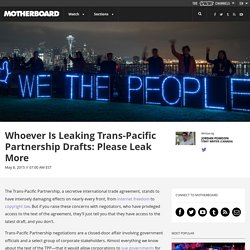 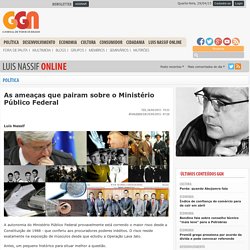 Islamic State appears to be fraying from within. BEIRUT — The Islamic State ­appears to be starting to fray from within, as dissent, defections and setbacks on the battlefield sap the group’s strength and erode its aura of invincibility among those living under its despotic rule. 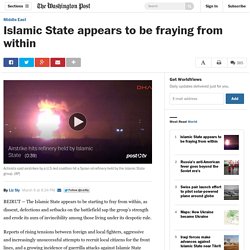 Reports of rising tensions between foreign and local fighters, aggressive and increasingly unsuccessful attempts to recruit local citizens for the front lines, and a growing incidence of guerrilla attacks against Islamic State targets suggest the militants are struggling to sustain their carefully cultivated image as a fearsome fighting force drawing Muslims together under the umbrella of a utopian Islamic state. [Watch: Islamic State militants smash ancient, irreplaceable artifacts]

Don’t Blow Up an Effective Iran Deal. Long March of the Yellow Jackets: How a One-Time Terrorist Group Prevailed on Capitol Hill. AT A SENATE Foreign Relations Committee hearing on Iran’s nuclear program in October 2013, more than a dozen men and women in yellow rain jackets sat in the gallery seats of the wood-paneled room, a bright presence amid the standard-issue dark suits of Washington. 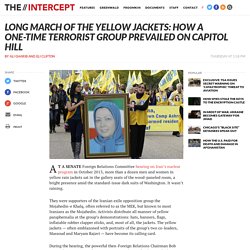 An Anti-ISIS Summit in Mecca. Jordanians: 'We Want Nothing Now, Only To Get Daesh Out' The War America Doesn't Want To Own. Saudi King Dies Amid Middle East Power Struggle. This Is America's Best Shot To Fix the Relationship With Saudi Arabia and Fight Terrorism. President Obama flies to Saudi Arabia on Tuesday, cutting short a visit to key democratic ally India, which recently organized the largest free and fair election in human history. 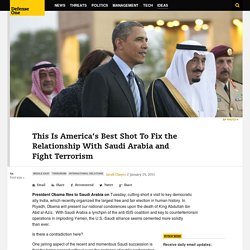 In Riyadh, Obama will present our national condolences upon the death of King Abdullah ibn Abd al-Aziz. With Saudi Arabia a lynchpin of the anti-ISIS coalition and key to counterterrorism operations in imploding Yemen, the U.S. -Saudi alliance seems cemented more solidly than ever. Cheap Oil Might Not Be the Worst Thing. ​Buying gas right now is even more of a guilt-inducing task than it was when it just meant everyday supplication to the overlords of fossil fuel. 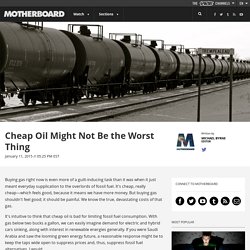 It's cheap, really cheap It's intuitive to think that cheap oil is bad for limiting fossil fuel consumption. With gas below two bucks a gallon, we can easily imagine demand for electric and hybrid cars sinking, along with interest in renewable energies generally. If you were Saudi Arabia and saw the looming green energy future, a reasonable response might be to keep the taps wide open to suppress prices and, thus, suppress fossil fuel alternatives. Are the Chinese Failing To Equip Their Infantry? North Korea calls China a 'Turncoat and our Enemy' The Chinese Military Is a Paper Dragon. Asia probably won’t assemble a new NATO-like alliance in the near future. 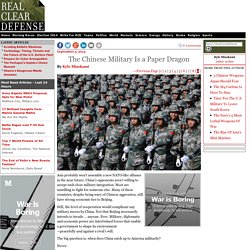 China’s opponents aren’t willing to accept such close military integration. Most are unwilling to fight for someone else. Many of these countries, despite being wary of Chinese aggression, still have strong economic ties to Beijing. Still, the level of cooperation would complicate any military moves by China. Not that Beijing necessarily intends to invade … anyone. The big question is, when does China catch up to America militarily? Carbon Colonialism: How the Fight Against Climate Change Is Displacing Africans. Carbon trading—one of the biggest weapons touted by governments and business in the global fight against climate change—could end up killing the planet. 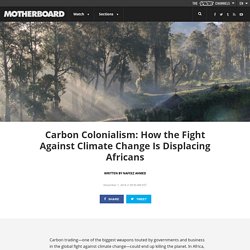 Why You Should Care About Greece Again. Greece is headed for yet another political crisis. 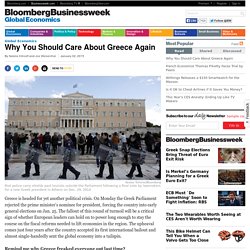 On Monday the Greek Parliament rejected the prime minister’s nominee for president, forcing the country into early general elections on Jan. 25. The fallout of this round of turmoil will be a critical sign of whether European leaders can hold on to power long enough to stay the course on the fiscal reforms needed to lift economies in the region. The upheaval comes just four years after the country accepted its first international bailout and almost single-handedly sent the global economy into a tailspin. Remind me why Greece freaked everyone out last time? From 2010 to 2012 there was a general panic that countries deep in debt—such as Greece, Italy, Portugal, Spain, and Ireland—would be forced to default and leave the euro zone.

This led to massive strain in government bond markets and the financial system. Why has the Russian economy plunged SO SUDDENLY into the toilet? Worstall @Xmas The best economic fun of the past few weeks has been watching the meltdown of the rouble and the associated problems in the Russian economy. 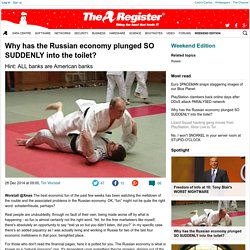 OK, “fun” might not be quite the right word: schadenfreude, perhaps? Real people are undoubtedly, through no fault of their own, being made worse off by what is happening - so fun is almost certainly not the right word. Yet, for the free marketeers like myself, there's absolutely an opportunity to say “told ya so but you didn't listen, did you?” Petróleo: a virada nos mercados globais e o Pré-sal.