GMO Linked to Gluten Disorders Plaguing 18 Million Americans. Genetically modified foods such as soy and corn may be responsible for a number of gluten-related maladies including intestinal disorders now plaguing 18 million Americans, according to a new report released on Tuesday. 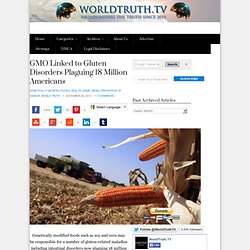 The report was released by the Institute for Responsible Technology (IRT), and cites authoritative data from the US Department of Agriculture, US Environmental Protection Agency records, medical journal reviews as well as international research. “Gluten sensitivity can range in severity from mild discomfort, such as gas and bloating, to celiac disease, a serious autoimmune condition that can, if undiagnosed, result in a 4-fold increase in death,” said Jeffrey M. Smith, executive director of IRT in a statement released on their website. Smith cited how a “possible environmental trigger may be the introduction of genetically modified organisms (GMOs) to the American food supply, which occurred in the mid-1990s,” describing the nine GM crops currently on the market. 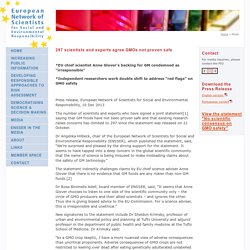 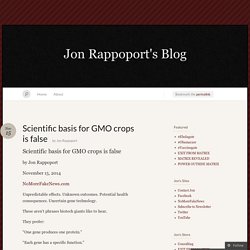 F. William Engdahl - Seeds of Destruction. GMO Crops are Threatening the Environment and Humankind. Killing the Food Supply: The Dangers of Genetically Modified Food. Genetically modified food has entered the food supply through secrecy and deception. 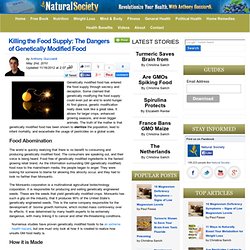 Some claimed that genetically modifying the food supply could even put an end to world hunger. At first glance, genetic modification really does look like a great idea. It allows for larger crops, enhanced growing seasons, and even bigger animals. The truth of the matter is that genetically modified food has been shown to sterilize the population, lead to infant mortality, and exacerbate the usage of pesticides on a global scale. Food Abomination The world is quickly realizing that there is no benefit to consuming and producing genetically modified food. The Monsanto corporation is a multinational agricultural biotechnology corporation. 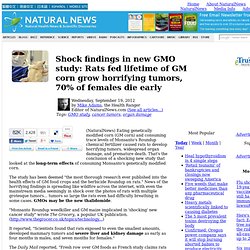 That's the conclusion of a shocking new study that looked at the long-term effects of consuming Monsanto's genetically modified corn. The study has been deemed "the most thorough research ever published into the health effects of GM food crops and the herbicide Roundup on rats. " News of the horrifying findings is spreading like wildfire across the internet, with even the mainstream media seemingly in shock over the photos of rats with multiple grotesque tumors... tumors so large the rats even had difficulty breathing in some cases. 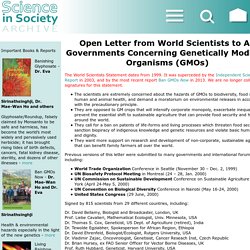 It was superceded by the Independent Science Panel Report in 2003, and by the most recent report Ban GMOs Now in 2013. 800 Scientists Demand Global GMO “Experiment” End. Did you hear about the 800 esteemed scientists who came together and demanded the production of genetically modified crops and products be stopped? 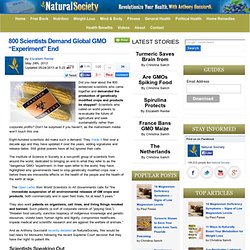 Scientists who called on world powers to re-evaluate the future of agriculture and seek sustainability rather than corporate profits? Don’t be surprised if you haven’t, as the mainstream media won’t touch this one. Eight-hundred scientists did make such a demand. Over 800 world scientists agree: GM crops are nothing short of a bio-war on our food. (NaturalNews) You don't have to be a rocket scientist to understand why genetically modified foods are dangerous, but if you look closely, you may just find the name of one listed among the names of more than 800 scientists from around the globe who have joined forces in an open letter to all world governments, outlining their detailed concerns over the alarming potential threat of biotech's unauthorized, worldwide GM foods experiment. 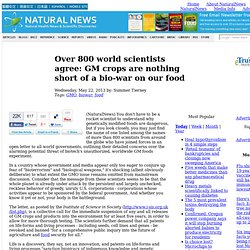 In a country whose government and media appear only too eager to conjure up fear of "bioterrorism" and "biological weapons," it's shocking (albeit obviously deliberate) to what extent the GMO issue remains omitted from mainstream discussion. Consider that the message from these scientists seems to be that the whole planet is already under attack by the persistent and largely unchecked, reckless behavior of greedy, unruly U.S. corporations - corporations whose activities appear to be sponsored by the federal government. Sources for this article include: The Independent Science Panel on GM Final Report. Dozens of prominent scientists from seven countries, spanning the disciplines of agroecology, agronomy, biomathematics, botany, chemical medicine, ecology, histopathology, microbial ecology, molecular genetics, nutritional biochemistry, physiology, toxicology and virology, joined forces to launch themselves as an Independent Science Panel on GM at a public conference, attended by UK environment minister Michael Meacher and 200 other participants, in London on 10 May 2003. 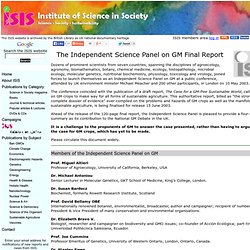 The conference coincided with the publication of a draft report, The Case for a GM-free Sustainable World, calling for a ban on GM crops to make way for all forms of sustainable agriculture. 10 Scientific Studies Proving GMOs Can Be Harmful To Human Health. Over the past few years, a number of countries have completely banned GMOs and the pesticides that go along with them, and they are doing so for a reason. 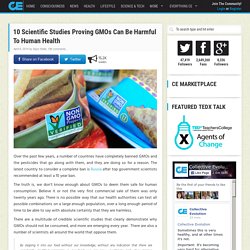 The latest country to consider a complete ban is Russia after top government scientists recommended at least a 10 year ban. The truth is, we don’t know enough about GMOs to deem them safe for human consumption. Believe it or not the very first commercial sale of them was only twenty years ago. There is no possible way that our health authorities can test all possible combinations on a large enough population, over a long enough period of time to be able to say with absolute certainty that they are harmless. There are a multitude of credible scientific studies that clearly demonstrate why GMOs should not be consumed, and more are emerging every year. If anybody ever tells you that we know with one hundred percent certainty that GMOs are totally safe to eat, they haven’t done their research. GMO Crops Threatening the Environment and Humankind.