Shengping is a daydreamer and a seeker, he doesn't know who he is and what he wants, and is trying to find them out. He is a wandering monk and a taoist in heart. He loves to live a quiet life in harmony with Nature. Often collecting edible/medicinal herbs in the field. Being a true lover of Nature and always try to live a natural life, and having been studying Traditional Chinese Medicine (TCM) and Taoist Inner Alchemy for many years (since 1980s), Shengping is now following a certification program on naturopathy (mainly phytotherapy & aromatherapy). he will soon officially launch himself as naturopath.

World Mysteries & Past. Dedroidify. Metaphysics Colleges, Metaphysical University, Spiritual Enlightenment. The Study Society - Talks and downloads. This page contains a variety of material for you to listen to or read. 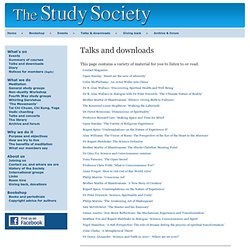 Our resistance causes us stress and suffering. Ruth White is a teacher of Iyengar Yoga who has developed a unique style of teaching that unites pupil and teacher in an atmosphere of happiness and well-being. Narain Ishaya was born in England in 1969. 2 March 2014 Ruth White, 121 minutes. Dr B. New Dawn Special Issue 15. After/between lives. 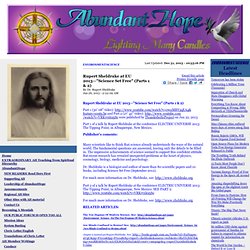 Many scientists like to think that science already understands the ways of the natural world. The fundamental questions are answered, leaving only the details to be filled in. The impressive achievements of science seemed to support this confident attitude. But recent research has revealed unexpected problems at the heart of physics, cosmology, biology, medicine and psychology. Dr. Part 2 of a talk by Rupert Sheldrake at the conference ELECTRIC UNIVERSE 2013: The Tipping Point, in Albuquerque, New Mexico: SEE PART 2: much more information on Dr.

The Ten Dogmas Of Modern Science. Are Minds Confined to Brains? Chapter 9 Animal psi Rupert Sheldrake. Change the Morphic Field…Change the World! DNA and Planetary Upliftment. Esu Speaks on Change and Creating Reality. see: Projecting Your Consciousness into the Future and Dealing with "Future Grief". Spiritless Humans. Rupert Sheldrake Online - Homepage. When we look at a star, are we projecting back in time? - Rupert Sheldrake, Chronicles. 1. Jason Silva. Twitter.com/JasonSilva || Facebook.com/JASONLSILVA Contact me: Info(at)ThisIsJasonSilva(dot)com "A Timothy Leary of the Viral Video Age" was how The Atlantic described television personality, media artist, filmmaker and techno-philosopher Jason Silva, who has also been described as "part Timothy Leary, part Ray Kurzweil, and part Neo from 'The Matrix.'... 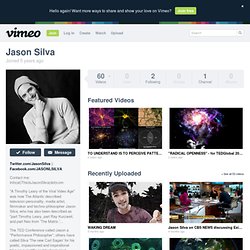 The TED Conference called Jason a "Performance Philosopher", others have called Silva 'The new Carl Sagan' for his poetic, impassioned and inspirational take on scientific and technological advancements, his riveting on-stage delivery style, and his hyper-enthusiastic insights on creativity, innovation, technology, philosophy and the human condition.

His non-commercial series of short videos, aptly named 'shots of philosophical espresso', explore the co-evolution of humans and technology and have gone viral with over 2 million views and "play like movie trailers for ideas," according to The Atlantic. Follow on twitter: @JasonSilva. Noosphere. Peter Sloterdijk in English [updated July 2013] Peter Sloterdijk (b.1947) is the coming man in philosophical anthropology (or rather, on the comeback after his first brush with fame in the 80s) — though his work is translated more often in French and Spanish than in English. 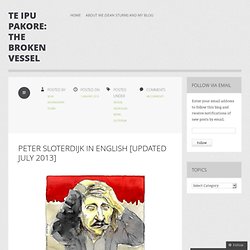 His Sisyphean Spheres trilogy (1998, 1999, 2004), a decade in the making and as yet untranslated in English, seems to have prevented his work becoming more broadly known in the Anglo world. Philosophy of the Acrobat: On Peter Sloterdijk. 7 Extraordinary Books You Need to Read to Become Ecoliterate. Complex networks and their unpredictable nature are rapidly transforming the world around us. 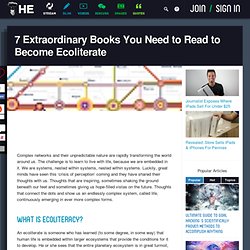 The challenge is to learn to live with life, because we are embedded in it. 5 Mind-Blowing Books That Are Worth The Struggle To Read. Books are obstacle courses for the mind. 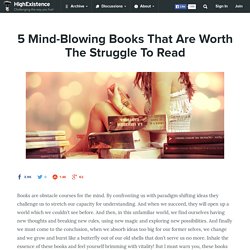 By confronting us with paradigm shifting ideas they challenge us to stretch our capacity for understanding.