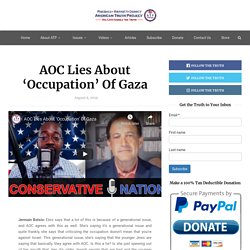 AOC Approval Rating Down To 22%! Jermain Botsio: Ocasio Cortez, this article finds that by 74 percent of voters in the poll, 22 percent had a favorable view. 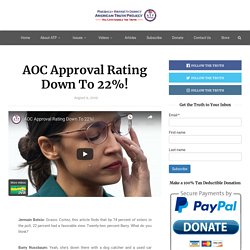 Twenty-two percent Barry. Dems Refuse to Condemn Tlaib Anti-Semitism. Jermain Botsio: Why isn't Nancy Pelosi, you know, she's queen and the Democrats right now, why is she stepping in and saying, "you know what? 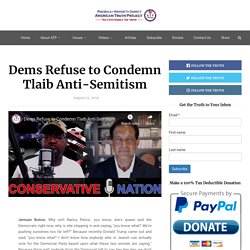 We're pushing ourselves too far left? " Because recently Donald Trump came out and said, "you know what? Why Did Israel Boycott Tlaib? Jermain Botsio: Congresswoman Rashida and Tlaib Ilhan Omar were planning a visit to Israel and the Palestinian territory last week and this week. 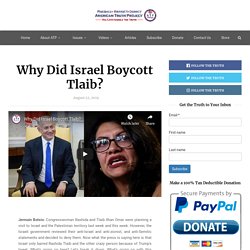 However, the Israeli government reviewed their anti-Israel and anti-zionist, and anti-Semitic statements and decided to deny them. Now what the press is saying here is that Israel only barred Rashida Tlaib and the other crazy person because of Trump's tweet. What's going on here? The Secret Reason for Cancellation of Tlaib’s Trip! Jermain Botsio: Rashida Tlaib now suggests that Bill Maher's show should be canceled. 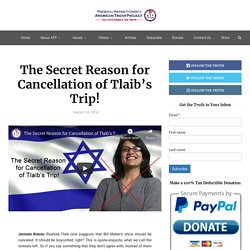 It should be boycotted, right? This is quote-unquote, what we call the tolerant left. So if you say something that they don't agree with, instead of them having a dialogue, a discussion, they don't want to do that. They want to cut you off. That's it, nobody listened to him. CNN Anchor has “Obligation” to Call Trump a Racist on Air Nightly. Contact - HENRY DAVIS MENTORING. Home - HENRY DAVIS MENTORING. CNN Fires on Air Anti-Semite Commentator.

Jermain Botiso: Marc Lamont Hill is in the news right now. And Marc Lamont Hill, let me tell you, is in deep doo-doo. He got booted off CNN. Thank the Lord. Let me go ahead and clap. And in time, a black leftie that gets kicked off CNN I have to clap on that one. News Anchor: CNN cut ties with contributor Marc Lamont Hill following his comments about Israel. Marc Lamont Hill: We have an opportunity. News Anchor: Mediaite reports the backlash was swift, with many noting from the river to the sea is a phrase used by Hamas and other anti-Israel terror groups. Jermain Botiso: So, Barry, he says that Palestine is to be free from the river challenges. CNN Expert Calls for Destruction of Israel! Who Can Slay an Ex-Muslim Under Sharia? Aynaz Anni Cyrus: Islam cannot coexist with our Constitution in America. 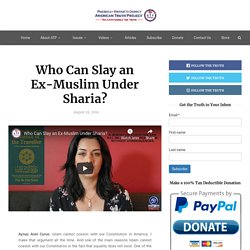 I make that argument all the time. And one of the main reasons Islam cannot coexist with our Constitution is the fact that equality does not exist. Obamas And Clintons Make Millions from White House Service…. No One Cares. Graham Ledger: Page Six now. 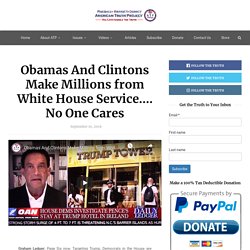 Targeting Trump, Democrats in the House are weaponized in their constitutional powers once again, this time spending taxpayer dollars on team Trump using Trump properties. That is a hit piece. And so you can see where this is going. Emoluments. Hello John Bolton, Goodbye JCPOA. Ambassador Insights with Danny Ayalon-The US & Iran. DHS Expert Predicts New Korea And Afghan Policies After Bolton! Barry Nussbaum: Good evening and welcome to the Truth Report. 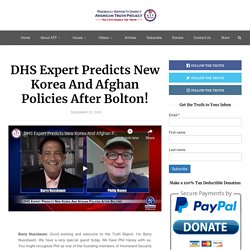 I'm Barry Nussbaum. We have a very special guest today. We have Phil Haney with us. You might recognize Phil as one of the founding members of Homeland Security here in the United States. He's a 35-year member of law enforcement with an expertise in Middle Eastern and terror policy. Homeland Security Expert Predicts Afghan Disaster After Bolton Fired! Barry Nussbaum: Good evening and welcome to the Truth Report. 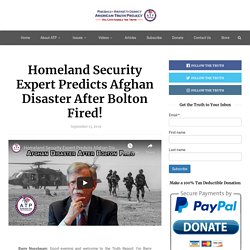 I'm Barry Nussbaum. We have a very special guest today. We have Phil Haney with us. You might recognize Phil as one of the founding members of Homeland Security here in the United States. He's a 35-year member of law enforcement with an expertise in Middle Eastern and terror policy. Hollywood Sides with Iran’s Terrorist Against USA! Jermain Botsio: MSNBC's Chris Matthews compares Soleimani to Princess Diana and Elvis. 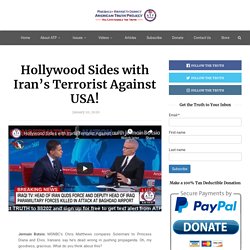 Iranians say he's dead wrong in pushing propaganda. Oh, my goodness, gracious. Will U.S. Respond to Iran’s Act of War on Saudi Arabia? Barry Nussbaum: Hello and welcome to ATP Report. I'm Barry Nussbaum. Before we get started with our very special guest, Clare Lopez today, I want to remind viewers to text "truth" to 8 8 2 0 2. You'll get signed up to be on the American Truth Project's mailing list. You'll get episodes and articles like what we're doing now on your cell phone, and it's always free. Or you can go to our website by typing in FindBarry.com. Clare Lopez: Thank you, Barry. Response Coming for Iran’s Brutal Terror Attack on Saudi Oil. Initially published in Center for Security Policy By Clare M.

Lopez The Iranian regime has been escalating its aggression all year, with attacks against oil tankers near the Strait of Hormuz, outright seizure of commercial ships and crews, drone attacks against Saudi oil infrastructure by terror proxies in Iraq and Yemen, and now, a direct attack from Iranian territory by both drones and cruise missiles against Saudi Arabia. The 14 September 2019 attack on two of Saudi Arabia’s largest oil processing facilities (the Abqaiq and Khurais plants) reportedly took out nearly half of the Kingdom’s daily oil output, resulting in a 5% cut to overall world production.

This is an act of war, direct, unequivocal, and with no room for plausible deniability. It must be met with an equally direct, prompt, kinetic response. Effigy Of Trump Hung, Burned At Palestinian Authority Rally. Media, Socialists Bemoan Booming Economy. Can an Observant Muslim Candidate Uphold the Constitution of America? Trump + Cruz = Victory in Texas. Pakistani Doctor Gets Tortured for Finding Bin Laden. Barry Nussbaum: Hello and welcome to the ATP report. I'm Barry Nussbaum. So we're back today with Clare Lopez, formerly of the CIA and now the Center for Security Policy, where she is the vice president of research.

Clare, thanks for coming back. Clare Lopez: Thank you, Barry. Thanks for having me. Barry Nussbaum: We're going to talk today about the Pakistani doctor who became an American hero for advising American intelligence where to find bin Laden in Pakistan when he was hiding in plain sight, I guess you would call it, in Islamabad. Clare Lopez: So this Pakistani medical doctor, whose name is Shakil Afridi, was recruited by the CIA when for some reason they were hunting bin Laden in all the wrong places. Barry Nussbaum: So he's hiding in plain sight. Clare Lopez: Well, I mean, first of all, to give him credit, what a courageous man he was to undertake a mission like this. Shocking Disclosure of Bin Laden Sheltered by Iran. Barry Nussbaum: Welcome to ATP Report. I'm Barry Nussbaum. We have a very special guest today, Clare Lopez. Clare is a former CIA officer and an expert in worldwide terror, especially in our topic for today.

And since she left the CIA, she's been at the Center for Security Policy, where she is the vice president of research. Clare, welcome to the Truth Report. Terror Groups Stay in U.S. Government Under Obama’s Protection. Turkey Wants Empire Based on Sharia. Barry Nussbaum: Hello, welcome to ATP Report. Kurds Abandoned by US, Is Israel Next? Barry Nussbaum: Hello, and welcome to ATP Report. AOC Gets Caught Faking Border Crisis Photos! Jermain Botsio: One thing I want to speak about is AOC. Recently she was just busted for staging fake pictures at a border detention center.

Candice Owens restaged the pics in a similar fashion, which was absolutely hilarious. Why Bernie And AOC’s Socialism Doesn’t Work. Jermain Botsio: Politicalnewsalert.com. Why Bernie is worried Ocasio Cortez's head will explode, and you know, what I see is a crazy old man trying to bring another person who is crazy on his staff. Sharia in America Overrules First Amendment! Aynaz Anni Cyrus: Today as I stand here, we don't really have our freedom. Because we are not actually practicing our rights.

The Iranian regime is still denying that one of its ground to air missiles caused the crash of Ukraine Airlines Flight 752. Joining me now, the founder of the American Truth Project and Daily Ledger contributor, Barry Nussbaum. Barry, this was a red flag to me, it was minutes after that plane went down the Iran national news went on and said that it was a mechanical problem. How can you make that assessment that quickly, and now they're saying, "Well, no, it can't have been shot down because the debris field is not large.

" This is all nonsense. Barry Nussbaum: Graham I spoke to a former CIA operations officer who had been stationed in a portfolio, including Iran, for a number of years she is of the opinion that worldwide intelligence is unanimous it was a missile strike. Graham Ledger: Well, I think you just proved pretty much by your research that it was not a mistake. Harboring Muslim Radicals in US Is Part of Jihad Obligation. White House Bomb Plotter Following Dictates of Islam! Escapees from Iran Get Very Little UN And US Support! Why President Trump Recognized Israel Sovereignty Over Golan Heights! Why the Golan Is So Important! U.N. Hates Israel! President Has the Right to Recognize Israeli Control of Golan! Trump Is Alone in The World: Recognizes Golan Heights As Israeli Territory! Impeachment Movement Is Disaster for Dems! Twitter and Google Shut Down Conservative Voices!

Farrakhan Goes Down! FB Bans Farrakhan And Loomer! Iran Attacks American, Is War Coming? Barry Explains Why Iran Wants War of Armageddon! Freedom and Vigilance Against Islam. Revisiting the Miracle of Israel’s Day War! US Pulling Out Of Dangerous Deal. Leave Politics Out Of Sports. Former Israeli Ambassador Wants To Block “Racist And Anti-Semetic” Ilhan Omar And Rashida Tlaib From Visiting Israel. No Governments Believe China Story on Covid-19! Did You Know This About Covid-19! Judge Goes Rogue in Flynn Case. Biden Campaign Will Campaign Against Trump on Covid-19! The Truth Behind Supporters of BDS and Anti Semitism! Tlaib Sides with Terrorists Again! Robert Spencer Explains How Palestinians Were Created by KGB. Why Biden Lost in Iowa. Joe Biden is a candidate with a BIG problem! Huge Biden Flip on Abortion!

The Dem’s Plan to Block Bernie Even After Super Tuesday! Why Trump’s Deal of The Century Is A Great Deal For All Sides. Iran Launches Massive Attack on Saudi Arabia But The World Seems To Side With Iran! The Iran Plan That Will Work for President Trump. Iran Stays in Syria To Threaten Israel. Supreme Leader of Iran Calls U.S. and Israel “Untrustworthy”