9 Fun Boardless, Cardless Games You Can Play On Your Next Roadtrip by Gunjan Upreti. Before smartphones and tablets, we used games to keep us entertained. 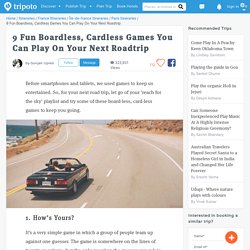 So, for your next road trip, let go of your 'reach for the sky' playlist and try some of these board-less, card-less games to keep you going. 1. How’s Yours? It's a very simple game in which a group of people team up against one guesser. The game is somewhere on the lines of twenty questions, but the only question the guesser can ask is “how’s yours?” How to play : • Ask the guesser to put on earphones and listen to music.

. • Once decided, the guesser will start approaching each player with the question, “how’s yours?” The questioned player gives a truthful clue that will ultimately help the guesser figure it out. For example, if the decided entity is a passport, your answer shouldn't be, “mine is full of stamps. . ” • The guesser is only allowed one guess per clue given, and the guesser can either go around asking in a fair circle or pick on people indiscriminately for clues. 2. Answer: Taken. Answer: Finding Nemo. 3. 4. 5. 6. The 30 best browser games in the world. That important piece of work you have to finish off? 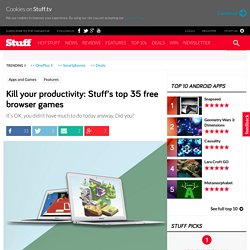 That dodgy garage door you were meant to fix? That costume you were going to make for the school play? Yeah, none of that's going to happen, because we've rounded up the finest browser games floating around in the digital ether, and best of all, they're all free. Sort of. Some of the games under consideration here are truly gratis, with maybe an ad banner on the page or, in some cases, a pre-roll advertisement every few levels.

Some are free but require an email address so that news about interesting and useful products can be delivered direct to your inbox. Some are freemium - they’re free to try out but all the really sweet add-ons (weapons, cars, whatever) require some sort of payment. I’ve included games from most of these categories but drawn the line at anything that requires a credit card impression before you start playing. Most run in your browser using Java or HTML 5. Oh and fun. Additional words by Sam Kieldsen. Good games you may have missed. 10 Best Free Android Games of the Year. Android developers launch so many games every year that it’s difficult to keep a track of everything. 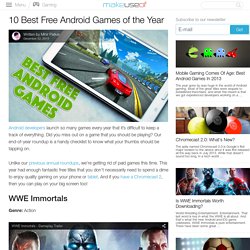 Did you miss out on a game that you should be playing? Our end-of-year roundup is a handy checklist to know what your thumbs should be tapping on. Unlike our previous annual roundups, we’re getting rid of paid games this time. This year had enough fantastic free titles that you don’t necessarily need to spend a dime to enjoy quality gaming on your phone or tablet. And if you have a Chromecast 2, then you can play on your big screen too! WWE Immortals Genre: Action NetherRealm Studios, the makers of Mortal Kombat, took the world of WWE sports entertainment and supercharged the “entertainment”. Download: WWE Immortals for Android (Free) Drench - the world's simplest flash game. Japanese RPGs Aren't Dead: 3 Solid Games Released In The Last Year. As our friend the Angry Video Game Nerd starts every episode off with – I’m gonna take you back to the past. 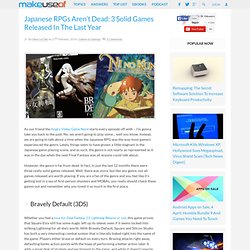 No, we aren’t going to play some… well you know. Instead, we are going to talk about a time when the Japanese RPG was the way most gamers experienced the genre. Lately, things seem to have grown a little stagnant in the Japanese game playing scene, and as such, the genre is not nearly as represented as it was in the day when the next Final Fantasy was all anyone could talk about. However, the genre is far from dead. In fact, in just the last 12 months there were three really solid games released. The 10 Best Board Games of 2013. It has been said—and I believe this to be true—that we live in a tabletop gaming renaissance. 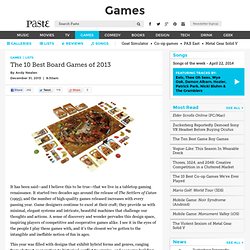 It started two decades ago around the release of The Settlers of Catan (1995), and the number of high-quality games released increases with every passing year. Game designers continue to excel at their craft; they provide us with minimal, elegant systems and intricate, beautiful machines that challenge our thoughts and actions. Come and waste your time - The ultimate Time-Killer collection. The ultimate Time Killer collection – If you have a few spare minutes on your hands and are basically looking for a way to ‘kill them’, the following collection of website links may just come in handy! 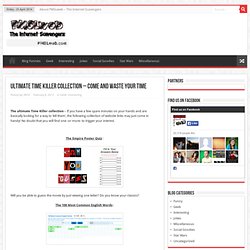 No doubt that you will find one -or more- to trigger your interest. Popular games.