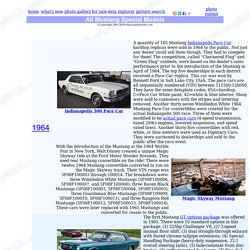 PONTIAC Firebird, Formula, Trans Am 70-81: PRO TOURING & G MACHINE. A Pro-Touring or G-Machine, what is it? 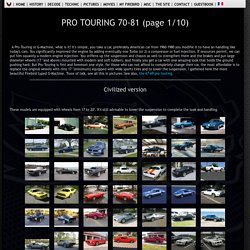 It's simple, you take a car, preferably American car from 1960-1980 you modifie it to have an handling like today's cars. You significantly improved the engine by adding eventually one Turbo (or 2) a compressor or fuel injection. If resources permit, we can put him squarely a modern engine injection. You stiffens up the suspension and chassis as well to strengthen them and the brakes and put large diameter wheels (17 "and above) mounted with modern and soft rubbers. And finally you get a car with one amazing look that holds the ground pushing hard. Civilized version These models are equipped with wheels from 17 to 20".

Extreme version Here, we are not in the same category. Back to main gallery. Bballchico’s albums. The big ramp-truck send-off column. Jim Eshelman sent the following three images, which he took at his first AHRA national event at Beeline Dragway in early 1967. 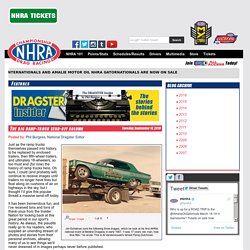 "I was 17 years old; man, how time flies," he wrote. This is Al Vanderwoude's famed Flying Dutchman. Just as the ramp trucks themselves passed into history, to be replaced by enclosed trailers, then fifth-wheel trailers, and ultimately 18-wheelers, so too must end (for now) the history of ramp trucks here. Oh sure, I could (and probably will) continue to receive images until trailers no longer have tires but float along on cushions of air on highways in the sky, but I thought I’d give this popular thread a massive send-off today. It has been tremendous fun, and I've received tons and tons of thank-yous from the Insider Nation for looking back at this great period in our sport's history. My quick count shows about 57 truck photos … damn, would have liked to have had 64. OK, on with the show. OFFICIAL COLOR (and interior) Camaro Camaro5.com. 427SC Shelby Cobra Roadster. 427SC Shelby Cobra Roadster We have completed the construction of our second Pro Street Hot Rod. 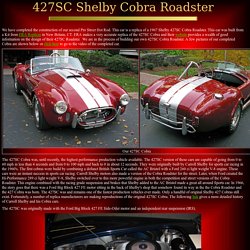 This car is a replica of a 1967 Shelby 427SC Cobra Roadster. This car was built from a Kit from ERA Replicas in New Britain, CT. ERA makes a very accurate replica of the 427SC Cobra and their website provides a wealth of good information on the design of their 427SC Roadster. We are in the process of building our own 427SC Cobra Roadster. The 427SC Cobra was, until recently, the highest performance production vehicle available. The 427SC was originally made with the Ford Big Block 427 FE Side-Oiler motor and an independent rear suspension (IRS). 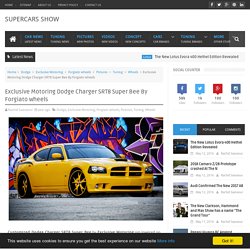 If You Like This Post Share It With Your Friends. Mustang GT500 Eleanor HD Desktop Wallpapers. Views: 1,369 Date: December 21 2014 At the heart of the history of the model Ford Mustang Shelby GT500 is the company’s cooperation with the famous Ford Motor racer Carroll Shelby, who won in 1959, the famous 24-hour race at Lehmann. 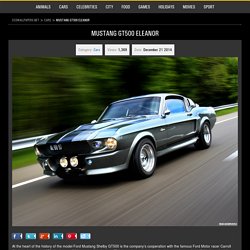 This legendary man who walked close nicknamed old (Cobra), marked the beginning of momentous issue with the prefix Shelby Mustangs. Thanks to Carroll Shelby, were built all the most famous landmark and model Mustangs. With his help, Ford has achieved a dominant position on the various racing in the sixties of the last century. 1969 SHELBY GT500 FASTBACK - Barrett-Jackson Auction Company - World's Greatest Collector Car Auctions. Join Us for the 45th Annual Scottsdale Auction at Westworld of Scottsdale in Scottsdale, Arizona (January 23-31) Now Accepting Consignments Click Here to Consign Now Lot #1245 *Includes Buyer Commission Details Description. 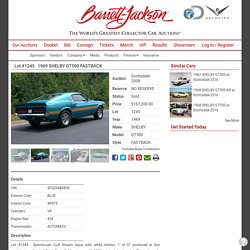 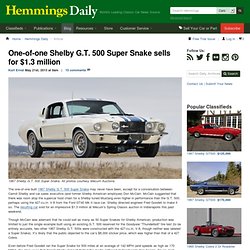 All photos courtesy Mecum Auctions. The one-of-one built 1967 Shelby G.T. 500 Super Snake may never have been, except for a conversation between Carroll Shelby and car sales executive (and former Shelby American employee) Don McCain. McCain suggested that there was room atop the supercar food chain for a Shelby-tuned Mustang even higher in performance than the G.T. 500, perhaps using the 427-cu.in. V-8 from the Ford GT40 Mk II race car. Shelby directed engineer Fred Goodell to make it so. Though McCain was adamant that he could sell as many as 50 Super Snakes for Shelby American, production was limited to just the single example built using an existing G.T. 500 reserved for the Goodyear “Thunderbolt” tire test (to be entirely accurate, two other 1967 Shelby G.T. 500s were constructed with the 427-cu.in.

“Eleanor,” as built for the 2000 remake of Gone in 60 Seconds. Mustang restauration. Mrchevyblack. The Old Car Manual Project. Planet Shelby Cobra. Your can personalize your genuine Shelby Cobra with the paint color of your choice. 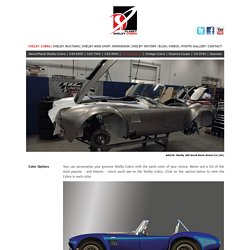 Below are a list of the most popular - and historic - colors you'll see on the Shelby Cobra. Click on the options below to view the Cobra in each color. ABOVE: Royal Blue ABOVE: 40th Anniversary ABOVE: Le Mans Blue ABOVE: Gulf Blue.