Colombi. Livres. Films. Here's A List Of 15 Movies Recommended By Wes Anderson Himself. Each week at Konbini, we focus in on a film director and ask them which movies have had the biggest impact on their work. 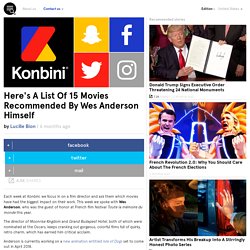 This week we spoke with Wes Anderson, who was the guest of honor at French film festival Toute la mémoire du monde this year. The director of Moonrise Kingdom and Grand Budapest Hotel, both of which were nominated at the Oscars, keeps cranking out gorgeous, colorful films full of quirky, retro charm, which has earned him critical acclaim. Anderson is currently working on a new animation entitled Isle of Dogs set to come out in April 2018. (Source: Facebook) So what are the genius of symmetry's references and preferences?