Amnesty Intl: Police must end militarized protest response. Amnesty International issued a statement on Sunday morning calling for an end to militarized policing in several U.S. cities and the use of "excessive force" against demonstrators protesting police brutality. 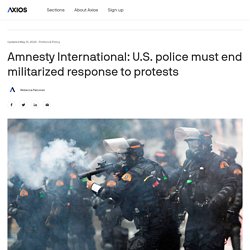 Why it matters: The human rights group said police across the country were "failing their obligations under international law to respect and facilitate the right to peaceful protest, exacerbating a tense situation and endangering the lives of protesters. " "Equipping officers in a manner more appropriate for a battlefield may put them in the mindset that confrontation and conflict are inevitable. " — Amnesty International statement The big picture: The National Guard mobilized and curfews were imposed in several states after clashes between police and demonstrators protesting the May 25 death of George Floyd and other black people who've died in police custody. Some officers responded to protests with restraint. Police targeted journalists covering the George Floyd protests.

On Friday night, photojournalist Linda Tirado was shot in the eye by a rubber bullet while covering an anti-police brutality protest in Minneapolis — one of more than two dozen incidents of journalists experiencing violence while covering the recent demonstrations. 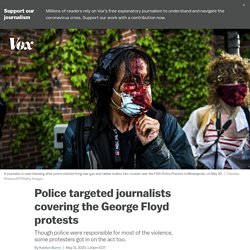 Tirado says she’s permanently blind in her left eye. (She is thankful she uses her right eye to take photos, so the injury is not career-ending.) an update: I am permanently blind in my left eye, and the docs absolutely refuse to let me go back to work for they say six weeks. I’m definitely not allowed to be near smoke or gas.Usually if I had to stay home I’d spend a lot of time amplifying folk but reading hurts today— Linda Tirado (@KillerMartinis) May 30, 2020 The Minneapolis Police Department and Mayor Jacob Frey’s office didn’t respond to requests for comment about Tirado’s injury.

Why rubber bullets are so dangerous and what to do if you get hit - Insider. During protests demanding justice for George Floyd, some police forces have used rubber bullets, considered a "non-lethal method of crowd control. 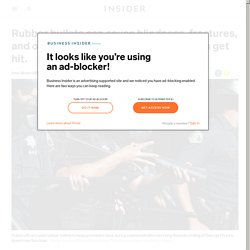 " When fired at too close a range or too high, rubber bullets can be dangerous and even deadly. If the bullet has seriously lacerated the skin, seek emergency care immediately. Otherwise, clean the wound, treat it with a topical like Neosporin, and wrap it in something clean. Visit Business Insider's homepage for more stories. A Reporter’s Cry on Live TV: ‘I’m Getting Shot! I’m Getting Shot!’ Linda Tirado, a freelance photographer, activist and author, was shot in the left eye Friday while covering the street protests in Minneapolis. 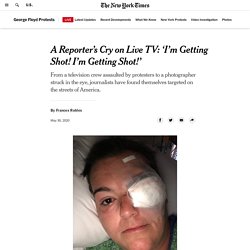 Ms. Tirado is one of a number of journalists around the country who were attacked, arrested or otherwise harassed — sometimes by police and sometimes by protesters — during their coverage of the uprisings that have erupted nationwide after the death of George Floyd in Minneapolis. With trust in the news media lagging, journalists have found themselves targeted. A television reporter in Louisville, Ky., was hit by a pepper ball on live television by an officer who appeared to be aiming at her, causing her to exclaim on the air: “I’m getting shot! I’m getting shot!”

Outside the White House, protesters attacked a Fox News correspondent and his crew, taking the journalist’s microphone and striking him with it. Ms. Ms. “I would say there is no way that anyone had looked at me and not known that I am a working journalist,” she said. What Does a Rubber Bullet Feel Like. Photo: KEREM YUCEL/AFP via Getty Images Over the weekend, protesters demanding justice for George Floyd’s death at the hands of a Minneapolis cop have themselves become victims of police brutality. 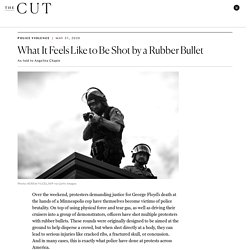 On top of using physical force and tear gas, as well as driving their cruisers into a group of demonstrators, officers have shot multiple protesters with rubber bullets. These rounds were originally designed to be aimed at the ground to help disperse a crowd, but when shot directly at a body, they can lead to serious injuries like cracked ribs, a fractured skull, or concussion. Rubber and plastic bullets too dangerous for crowd control, says study. Rubber and plastic bullets should not be used for crowd control, researchers have said, pointing out that such weapons are often inaccurate and can cause death, disabilities or severe injuries. 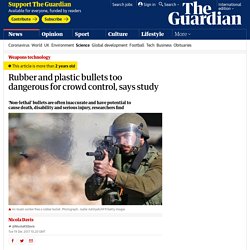 Bullets made of plastic, rubber, or other materials such as metal shot in a fabric bag, are used as a “less lethal” means of crowd control the world over, from the US to India. While they can leave a gun with velocities similar to live ammunition, they are designed to lose speed rapidly, reducing the force of impact. Generally, users are supposed to aim the weapons at individuals’ lower limbs. Spanish police used rubber bullets in Barcelona during recent protests around the Catalan elections, although the projectiles have been banned for use by Catalan police since 2014. “Our findings indicate that these weapons have the potential to cause severe injuries and death,” the authors write. In Missouri, protesters get shot at with rubber bullets, injured. Ban the use of inhumane rubber bullets. Casting Non-Lethal "Practice Ammo" (3 Calibers And Shotgun) 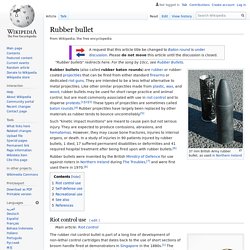 Related:  Mid 2020-? Police Murder of Yet Another US Citizen of Color Triggers Mostly Peaceful Protests Jacked Up by Angry Cops w/Weapons   -  Education   -  Enterprise