Mid 2020-? Police Murder of Yet Another US Citizen of Color Triggers Mostly Peaceful Protests Jacked Up by Angry Cops w/Weapons

George Floyd Was Killed in My Neighborhood Where Racism Has Always Been a Problem. My sister and I careened on our bikes, stopping in front of the box. 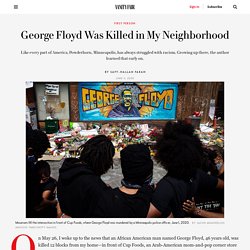 I lurched toward it, wobbling bow-legged with the bike’s various tubes between my legs, and looked inside. How to Make this Moment the Turning Point for Real Change. As millions of people across the country take to the streets and raise their voices in response to the killing of George Floyd and the ongoing problem of unequal justice, many people have reached out asking how we can sustain momentum to bring about real change. 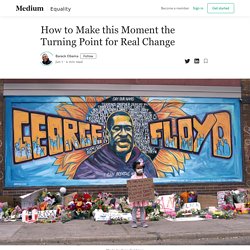 Ultimately, it’s going to be up to a new generation of activists to shape strategies that best fit the times. But I believe there are some basic lessons to draw from past efforts that are worth remembering. First, the waves of protests across the country represent a genuine and legitimate frustration over a decades-long failure to reform police practices and the broader criminal justice system in the United States. 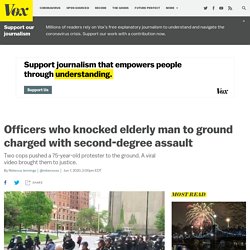 The officers, Aaron Torgalski, 39, and Robert McCabe, 32, have pleaded not guilty and have been released without bail, but if convicted, they could face a maximum of seven years in prison. The charges represent the latest of a number of cases in which viral videos showing evidence of police violence have led to disciplinary action. Justice for George Floyd.

How Americans Feel About George Floyd’s Death And The Protests. Welcome to Pollapalooza, our weekly polling roundup. 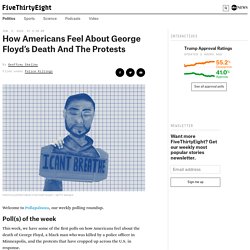 Poll(s) of the week This week, we have some of the first polls on how Americans feel about the death of George Floyd, a black man who was killed by a police officer in Minneapolis, and the protests that have cropped up across the U.S. in response. On the one hand, an overwhelming majority of Americans say Floyd’s death was wrong and the police officers involved should be held accountable. You can support the BLM movement without going to a protest. Here’s how. Since last week, protests have erupted in over 300 cities nationwide against the endless police violence waged against Black people. 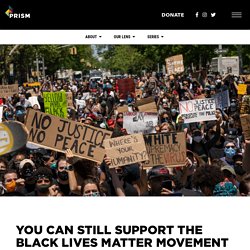 Mayor Bowser has 'Black Lives Matter' painted on street leading to White House. WASHINGTON — District of Columbia Mayor Muriel Bowser on Friday had "Black Lives Matter" painted on the street that leads to the White House where protesters have been demonstrating following George Floyd’s death in police custody. 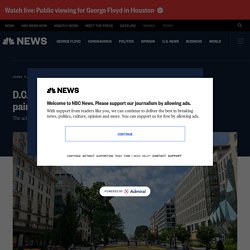 "There are people who are craving to be heard and to be seen, and to have their humanity recognized, and we had the opportunity to send that message loud and clear on a very important street in our city," Bowser said at a press conference. "And it is that message, and that message is to the American people, that Black Lives Matter black humanity matters, and we as a city raise that up as part of our values as a city. " The mayor said that the people who painted it were from the D.C. Public Works Department. 5/29/20: Twitter flags Trump tweet on Minneapolis for 'glorifying violence'

Jaap Arriens | NurPhoto | Getty Images Twitter has slapped a “public interest notice” on a tweet from President Donald Trump, saying it violated its rules regarding the glorifying of violence. 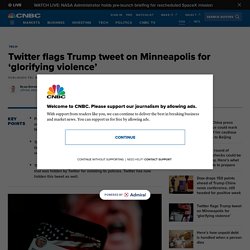 Trump took shelter in White House bunker as protests raged. WASHINGTON (AP) — Secret Service agents rushed President Donald Trump to a White House bunker on Friday night as hundreds of protesters gathered outside the executive mansion, some of them throwing rocks and tugging at police barricades. 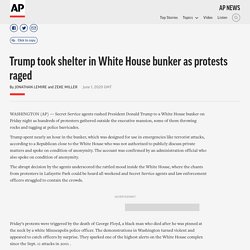 Trump risks breaking law if he uses US military to suppress riots and taps army general to lead protest response. Donald Trump plans to establish a "central command centre" headed by Joint Chiefs of Staff Chairman Mark Milley in an attempt to "dominate" the streets in cities where protests over the killing of George Floyd have at times turned riotous. 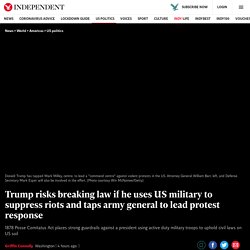 Mr Trump has also endorsed a potential course of action laid out by Republican Senator Tom Cotton of Arkansas on Monday to send US army units to areas of the country where there is acute rioting, which would appear to violate laws governing the use of active duty military personnel to quell domestic unrest. The 1878 Posse Comitatus Act places strong guardrails against a president using active duty military troops to uphold civil laws on US soil. Congress can waive the law, but it is not likely Democrats would cede such authority to Mr Trump given the politically and racially sensitive nature of the protests. Download the new Independent Premium app Sharing the full story, not just the headlines.

Protests & Response to Murder of George Floyd & Others 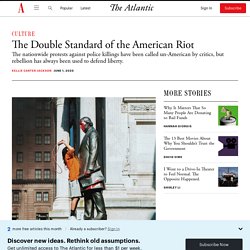 Attucks was one of a handful of protesters killed by British forces during the Boston Massacre. The lawyer tasked with defending the British soldiers in their American criminal trial was none other than Adams. When presenting his case, Adams described the men those soldiers killed as “a motley rabble of saucy boys, negroes and molattoes [sic], Irish teagues and outlandish jack tarrs.” Stop Calling These Riots, Now. Watts, Detroit, Ferguson: all sites of historic uprisings in 1965, 1967, and 2014, and each was labeled a “riot” in news headlines. The Reliably Racist Cherry-Picking of the Word “Riot” John Minchillo/AP For indispensable reporting on the coronavirus crisis and more, subscribe to Mother Jones' newsletters. As Minneapolis burns and President Trump fans the flames with tweets so incendiary that Twitter slapped warning labels on them, reporters and editors have rightly called out his racist rhetoric, all the while using coded language of another kind. Police arrest CNN correspondent Omar Jimenez & crew on live TV.

Police Drag Women Out Of Car Outside Brickyard Mall, Woman Says Officer Put Knee On Neck. CHICAGO (CBS) — A swarm of police officers drew their batons and beat down the windows as they pulled two women from their vehicle outside the Brickyard Mall. It was all caught on camera. As CBS 2’s Jermont Terry reported Wednesday night, the incident happened Sunday, right in the height of looting amid unrest in Chicago. A family pulled into the parking lot at Brickyard, at 2600 N. Narragansett Ave., only to realize things were closed and out of control. But before they could exit, they were stopped by officers who thought they had been looting too. San Leandro police accused of 'stomping' on pregnant woman.

SAN LEANDRO — A woman claims that police stomped on her when she was pregnant and caused her to have a miscarriage when they pulled over her and her fiancée in San Leandro in 2019. Emerald Black, who is being represented by the law offices of well-known civil rights attorney John Burris, filed the complaint against the city this week in U.S. District Court Northern District of California.

Antifa ? Rubber Bullets. Protest. Cop Explains How It Feels To Live Every Day In Fear Someone Might Record You Brutalizing A Civilian.