Why I'll Never Get Married Again - Motto. I was married once. 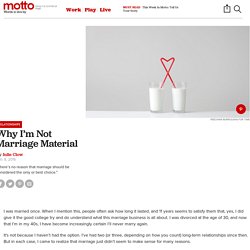 When I mention this, people often ask how long it lasted, and 11 years seems to satisfy them that, yes, I did give it the good college try and do understand what this marriage business is all about. I was divorced at the age of 30, and now that I’m in my 40s, I have become increasingly certain I’ll never marry again. It’s not because I haven’t had the option. I’ve had two (or three, depending on how you count) long-term relationships since then. But in each case, I came to realize that marriage just didn’t seem to make sense for many reasons. 1. Read more: How to Balance Your Career and Your Personal Life 2. 3. Subscribe to the Motto newsletter for advice worth sharing. 4. Loaded: 0% Progress: 0% 5. Read more: Elise Stefanik: My Advice to Anyone Who’s Ever Been the Youngest Woman in the Room 6. Social narratives tell us that marriage is just the thing you do when you become responsible and want to “settle down.”

Guys, Here’s What It’s Actually Like To Be A Woman. You have no fucking idea what you’re doing. 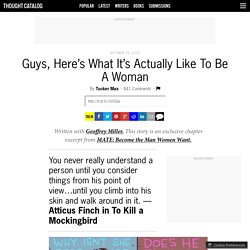 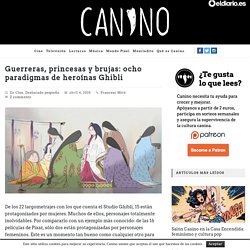 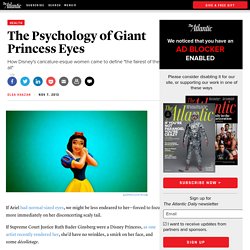 If Supreme Court Justice Ruth Bader Ginsberg were a Disney Princess, as one artist recently rendered her, she'd have no wrinkles, a smirk on her face, and some décolletage. And when Pixar redesigned Merida, the star of Brave, in May, she got a smaller waist and bigger hair. The debate over the merits of Disney princesses is as old as time, but it's fairly undeniable that the animated films' female leads tend to look like a "pretty girl" cliche. Not just Nefertiti – there are plenty of influential women in history. If you look for them… Nefertiti’s tomb may have been found behind that of her son, Tutankhamun. 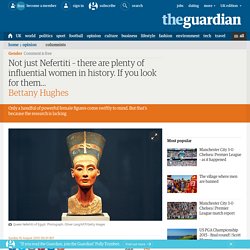 Or it may not. Yet the possibility has spawned excitable headlines across the globe. The story here is not simply the hypothesis, advanced by a British Egyptologist from the University of Arizona, Dr Nicholas Reeves, whose digital study of Tutankhamun’s burial chamber has, perhaps, revealed two unopened side doors. It’s more that this bronze age queen has such pulling power. Nefertiti is an exception that proves a rather worrying rule – only a handful of women, living or dead, have the power to command such attention. Nefertiti taught me this lesson in 2010. After a fortnight in Amarna, a news-free desert, a baggage handler at Cairo airport asked me what I had been up to. But the female characters who guarantee such instant impact can be counted on the fingers of one hand. 9 Style Rules Every Working Woman Should Follow. Informe Doulas: Si Semmelweis resucitara... Las mujeres olvidadas de la Generación Beat. Érase una mujer. Érase una mujer que no tenía más que sus manos para ganar el pan de cada día. 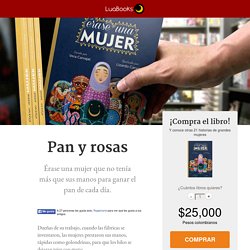 Mothers' Sounds Are Building Block for Babies' Brains - NYTimes.com. Photo The sound of a mother’s voice plays a critical role in a baby’s early development, multiple studies have shown. 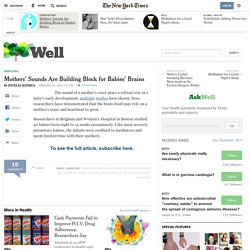 Now, researchers have demonstrated that the brain itself may rely on a mother’s voice and heartbeat to grow. Researchers at Brigham and Women’s Hospital in Boston studied 40 babies born eight to 15 weeks prematurely. Like most severely premature babies, the infants were confined to incubators and spent limited time with their mothers. “Preemies born this early are basically fetuses that happen to be out there by accident,” said Amir Lahav, an assistant professor of pediatrics at Harvard Medical School and senior author of the study. Using tiny speakers placed inside the incubators, half the babies were exposed to the sounds of their mothers’ voices and heartbeats for three extra hours every day. After 30 days, babies in the first group had developed a significantly larger auditory cortex — the hearing center of the brain — than those in the second group. Emma Stone - Red Carpet Watch. Dominique Christina - "The Period Poem"