What to Do When You Have a Candy Hangover. Photo by Getty Images/iStockphoto You swore this year would be different, that you’d follow all the healthy-Halloween tips: You’d stock up at the last minute to avoid month-long temptation, you’d only buy varieties you don’t like (looking at you, Bit-O-Honey). 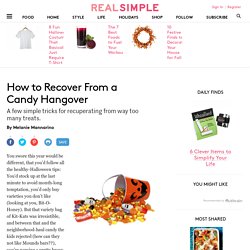 But that variety bag of Kit-Kats was irresistible, and between that and the neighborhood-haul candy the kids rejected (how can they not like Mounds bars??) , you’re nursing a pretty heavy candy hangover. Ouch. How did this happen (again)? Sugar hangovers happen, to grownups and kids alike. Willy Wonka could steer a boat between the recommended 3 fun size candy bars and the actuality of 1 pound of the stuff. First you feel the sugar high: “In the short term, a sugar binge can make you feel very energetic,” says Decostole. Curating an Art Show in 10 Easy Steps - A Step by Step Guide for Art Curators: Consider Your Audience.

The utopian display platform. The Art of Curating and the Curating of Art Jens Hoffmann This lecture is based on an essay that I wrote in 2004 for the forthcoming issue of the MANIFESTA JOURNAL, which is investigating the relationship between artists and curators in the set-up of art exhibitions today. 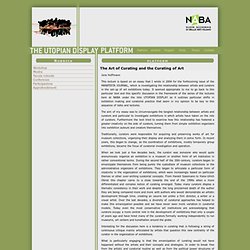 It seemed appropriate to me to go back to this particular text and this specific discussion in the framework of the series of the lectures here at NABA under the title UTOPIAN DISPLAY as it outlines particular shifts in exhibition making and curatorial practice that seem in my opinion to be key to this sequence of talks and lectures. The aim of my essay was to circumnavigate the tangled relationship between artists and curators and particular to investigate exhibitions in which artists have taken on the role of curators.

Traditionally, curators were responsible for acquiring and preserving works of art for museum collections, organizing their display and analyzing them in some form. A Step by Step Guide for Curating an Art Show. In today’s art world, you do not need to be a museum staff member to curate an art exhibition. 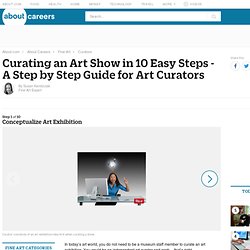 You could be an independent art curator and work -- that’s right -- independently. A curator’s job is like a movie director’s in that you need to oversee every detail of the production so it helps to be extremely organized and that you can work well with others as it takes many skilled people to put on an exhibition. There is not a one-size-fits-all approach, but various methods.

Here is one simplified process to put on an exhibition from start to finish. If feasible, give yourself at least six months to arrange all the necessary details. The First Step to Curating Your Art. Let’s face it. 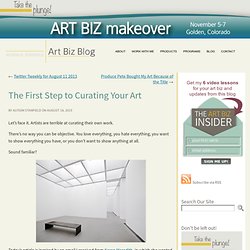 Artists are terrible at curating their own work. There’s no way you can be objective. You love everything, you hate everything, you want to show everything you have, or you don’t want to show anything at all. Sound familiar? Today’s article is inspired by an email I received from Karen Meredith, in which she wanted to know about the proper number of works to have on a website, in an exhibition, or at an open studio. If there is a sweet spot for the number of works you should show, you still have to whittle down the inventory. Curate is a hot term online these days. Hans Ulrich Obrist: the art of curation.

Hans Ulrich Obrist One of my childhood heroes was Sergei Diaghilev. 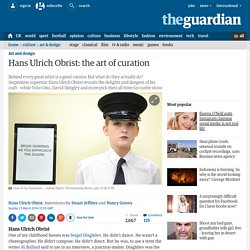 He didn't dance. He wasn't a choreographer. He didn't compose. He didn't direct. The Man Who Made Curating an Art. Hans Ulrich Obrist enjoys a level of prominence in the art world that would have been unimaginable for a curator of contemporary art 20 years ago. 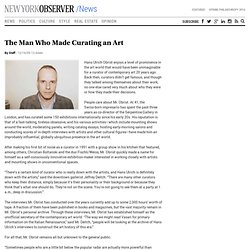 Back then, curators didn’t get famous, and though they talked among themselves about their work, no one else cared very much about who they were or how they made their decisions. People care about Mr. Obrist. At 41, the Swiss-born impresario has spent the past three years as co-director of the Serpentine Gallery in London, and has curated some 150 exhibitions internationally since his early 20s. His reputation is that of a fast-talking, tireless obsessive, and his various activities–which include mounting shows around the world, moderating panels, writing catalog essays, hosting early-morning salons and conducting scores of in-depth interviews with artists and other cultural figures–have made him an improbably influential, globally ubiquitous presence in the art world. The interviews Mr. THE ART OF CURATING - Article detail. What Does It Mean To “Curate”? Pin board of a Milwauke Art Museum Curator. 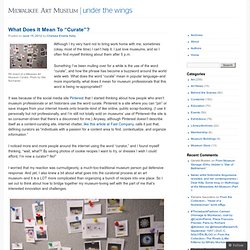 Photo by Mel Buchanan. Although I try very hard not to bring work home with me, sometimes (okay, most of the time) I can’t help it. I just love museums, and so I often find myself thinking about them after 5 p.m. Something I’ve been mulling over for a while is the use of the word “curate”, and how the phrase has become a buzzword around the world wide web. What does the word “curate” mean in popular language–and more importantly, what does it mean for museum professionals that this word is being re-appropriated?

It was because of the social media site Pinterest that I started thinking about how people who aren’t museum professionals or art historians use the word curate. I noticed more and more people around the internet using the word “curator,” and I found myself thinking, “wait, what?! I worried that my reaction was curmudgeonly, a much-too-traditional museum person gut defensive response. So, what’s the difference? The Alchemy of Curating. By Jerry Saltz The alchemy of good curating amounts to this: sometimes placing one work of art near another makes one and one equal three. 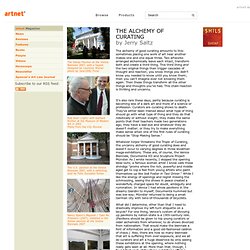