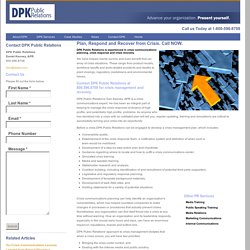 We have helped clients survive and even benefit from an array of crisis situations. These range from product recalls, workforce layoffs and work-related accidents and deaths to plant closings, regulatory crackdowns and environmental issues. Contact DPK Public Relations at 800.596.8708 for crisis management and recovery. DPK Public Relations' Dan Keeney, APR is a crisis communications expert. He has been an integral part of helping to manage the crisis response of dozens of high profile, and potentially high profile, problems.

Before a crisis DPK Public Relations can be engaged to develop a crisis management plan, which includes: Crisis communications planning can help identify an organization's vulnerabilities, which has helped countless companies to make changes in processes or procedures that actually prevent crises. The Digital Divide 2.0 - CBS News. GENERIC: World, Computer, Internet, Kids, Children, Teens, Teenager, Online, Parenting Control CBS This story was reported by CBSNews.com's Jennifer Hoar "Girls, finish your homework — people in China and India are starving for your jobs. 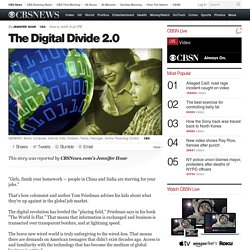 " That's how columnist and author Tom Friedman advises his kids about what they're up against in the global job market. The digital revolution has leveled the "playing field," Friedman says in his book "The World Is Flat. " That means that information is exchanged and business is transacted over transparent borders, and at lightning speed. The brave new wired world is truly unforgiving to the wired-less. Want to comment on this story? "Digital literacy is the way to win the game," says Angus King, former Governor of Maine and an advocate of technology in education. For the past decade, the digital divide has referred to the disparity in technological access due to factors such as economics, race and geography. Copyright 2006 CBS. OCLC DeweyBrowser. Internet Archive: Digital Library of Free Books, Movies, Music & Wayback Machine. 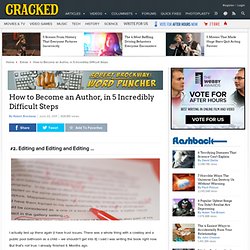 I actually lied up there again (I have trust issues. There was a whole thing with a cowboy and a public pool bathroom as a child -- we shouldn't get into it): I said I was writing the book right now. But that's not true. I already finished it. Months ago. What I'm doing now is editing, and that process is a dozen times longer than the actual writing. For those of you who can just bang out a draft in one go, clap your hands, whirl on your heel and exit the room, burning it behind you so that others might not defile it with their lesser genius -- most of us writers also have to double as self-editors. Editing is just like writing, except hateful, and in reverse. After a while, it does get easier though. " 'They're is no end? ' Learning to edit is, quite simply, learning to hate yourself word by word.

Still Life. Compared with the glistening two-story mansions that surrounded it, the house looked like something from another time. 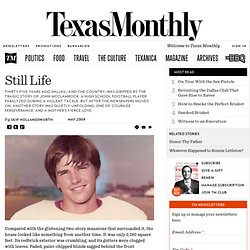 It was only 2,180 square feet. Its redbrick exterior was crumbling, and its gutters were clogged with leaves. Faded, paint-chipped blinds sagged behind the front windows. Next to the concrete steps leading to the front door, a scraggly banana plant clung to life. Built in 1950, it was one of the last of the original single-story homes on Northport Drive, in Dallas’s Preston Hollow neighborhood. None of the neighbors knew that mailmen once delivered boxes of letters to the front door and that strangers left plates of food or envelopes stuffed with money. In fact, it wasn’t until the spring of last year that they learned that the little house used to be one of Dallas’s most famous residences, known throughout the city as the McClamrock house.

That morning, John sat restlessly through his classes. John’s head snapped back, and he fell face-first to the ground. 025.431: The Dewey blog: "Peace Prize is a slap on the back for a struggling European Union" is the headline for the CNN story about the Nobel Peace Prize for 2012. Here are excerpts from the press release on the official Nobel site: The Norwegian Nobel Committee has decided that the Nobel Peace Prize for 2012 is to be awarded to the European Union (EU).

The union and its forerunners have for over six decades contributed to the advancement of peace and reconciliation, democracy and human rights in Europe. In the inter-war years, the Norwegian Nobel Committee made several awards to persons who were seeking reconciliation between Germany and France. Since 1945, that reconciliation has become a reality. The EU is currently undergoing grave economic difficulties and considerable social unrest.