Surrealist Games - S+ART. To the Surrealists, playing games was an important part of the creative process. 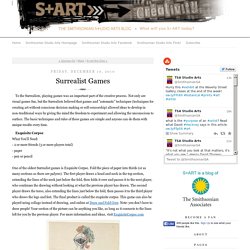 Not only are visual games fun, but the Surrealists believed that games and "automatic" techniques (techniques for creating art without conscious decision making or self-censorship) allowed ideas to develop in non-traditional ways by giving the mind the freedom to experiment and allowing the unconscious to surface. The basic techniques and rules of these games are simple and anyone can do them with unique results every time. Exquisite CorpseWhat You'll Need:- 2 or more friends (3 or more players total)- paper- pen or pencil One of the oldest Surrealist games is Exquisite Corpse.

Fold the piece of paper into thirds (or as many sections as there are palyers). Andre Breton, Man Ray, Max Morise, Yves Tanguy, Exquisite Corpse, ca 1927 CubomaniaWhat You'll Need:- a photograph or other image on paper- scissors- canvas, board, or heavy paper- glue Daniel C. Allison Recht. Foucault. "'M. 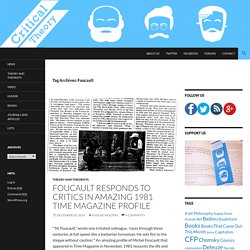 Foucault," wrote one irritated colleague, 'races through three centuries at full speed, like a barbarian horseman. He sets fire to the steppe without caution.'" An amazing profile of Michel Foucault that appeared in Time Magazine in November, 1981 recounts the life and work of the theorists nearly three years before his death. It was recently … Continue Reading ›› Elden is currently working on a book for Polity Press entitled “Foucault’s Last Decade,” which delves into the litany of published and unpublished works, manuscripts and lectures that Foucault left behind after his untimely death. Nottingham Trent University is now accepting submissions for their 2015 conference on Michel Foucault’s “Discipline and Punish.” In this video, entitled “This Teen Has An Inspiring Message For His Bully, Then Gets Totally Owned By The Bully’s Surprisingly Convincing Rebuttal,” a bullied teen stands up and proclaims to his aggression: “You don’t have the right!”

You’ve got until September. An A to Z of Theory Roland Barthes’s Mythologies: A Critical Theory of Myths. In the second of his series on Roland Barthes, political theorist Andrew Robinson presents the French author's theory of myths. 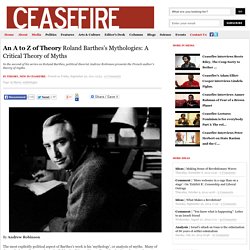 By Andrew Robinson The most explicitly political aspect of Barthes’s work is his ‘mythology’, or analysis of myths. Many of the myths he studies come from the fields of politics and journalism. Barthes’s work on myths prefigures discourse-analysis in media studies. He is discussing the type of discourse which is particularly typical of right-wing populism and of the tabloid press. The main purpose of his work in ‘Mythologies’ is to dissect the functioning of certain insidious myths. Barthes’s example is a magazine cover which shows a black soldier saluting the French flag. Myth is a metalanguage. Myths differ from other kinds of signifiers. Barthes-mythtoday. Learning Techniques. One of the things that we expect you to pick up by osmosis, but almost never mention explicitly, is techniques for learning itself. 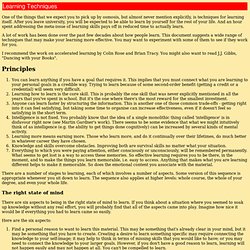 After you leave university, you will be expected to be able to learn by yourself for the rest of your life. And an hour spent addressing the meta-issue of learning skills pays off in reduced time to actually learn. A lot of work has been done over the past few decades about how people learn. This document suggests a wide range of techniques that may make your learning more effective. You may want to experiment with some of them to see if they work for you. I recommend the work on accelerated learning by Colin Rose and Brian Tracy. You can learn anything if you have a goal that requires it. There are a number of stages to learning, each of which involves a number of aspects.

The right state of mind There are six aspects to being in the right state of mind to learn. Here are the six aspects: Berger. What Is Cultural Semiotics. Semiotics-in-graphic-design-4.jpg (JPEG Image, 530 × 372 pixels) Brucewilsongraphics. Explanation of Durer Woodcut. 9780807748923Activities. Critical_positions. Hall Introduction. 8_criticalthinking_summary1.pdf. Extract from the Introduction to Hall’s ‘Representation’ Schools of criticism. Screenshot 2014 08 18 12 13 33. Critical process diagram. 55352 Hall ch 1. Critical analysis. Critical_positions.