Twine / An open-source tool for telling interactive, nonlinear stories. Using Games for Learning: Practical Steps to Get Started. Joan Ganz Cooney Center Part 19 of MindShift’s Guide to Games and Learning By now, you’ve probably read enough to be convinced that it’s worth trying games in your classroom. 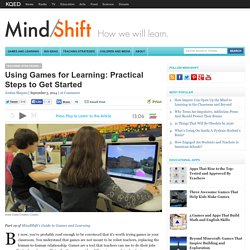 You understand that games are not meant to be robot teachers, replacing the human-to-human relationship. Games are a tool that teachers can use to do their jobs more effectively and more efficiently. Games provide a different approach to developing metacognitive skills through persistent self-reflection and iteration of particular skill sets. There are so many great reasons to include digital games among classroom activities. Though every educator can find her own way, here are ideas for the first four steps to getting started with digital games in the classroom. Step 1: Assess Your Resources What platforms do you have available in your class? Hardware is one of the biggest determining factors, and it will have a significant impact on the way you use games in the classroom. 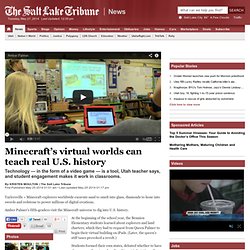 Amber Palmer’s fifth-graders visit the Minecraft universe to dig into U.S. history. Airing Thursday o Five Utah teachers have been selected for KUED-The Salt Lake Tribune Teacher Innovation Awards, which celebrate their creative use of technology in classrooms. The awards were given in the categories of arts, math, language arts, science and social studies. The winners are being profiled in a continuing Tribune series this week and in a half-hour documentary airing Thursday at 7 p.m. on KUED-Channel 7. TribTalk: Celebrating innovation As digital devices increasingly appear in Utah classrooms, the challenge is using them effectively in teaching. You can join the discussion by sending questions and comments to the hashtag #TribTalk on Twitter and Google+. story continues below. Gaming in education: 'We don’t need no stinking badges' Educators and game designers say gamification is not about adding games to classes, but designing classes as games When video game designer and writer Lee Sheldon designed a physical fitness class called “Skeleton Chase,” he didn’t ask any students to climb into a sewer drain. 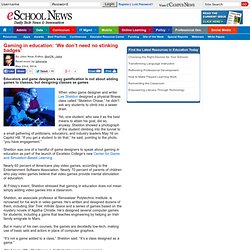 Yet, one student, who saw it as the best means to attain his goal, did so, anyway. Sheldon showed a photograph of the student climbing into the tunnel to a small gathering of politicians, educators, and industry leaders May 16 on Capitol Hill. Video game Minecraft finds a home in schools. April 28, 2014|By John Keilman, Tribune reporter Seventh-graders at Northbrook's Maple School had just started learning about the Cold War when a handful of boys sat down at the school's library computers to cement their understanding of the subject. 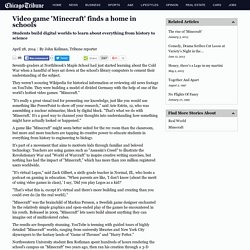 They weren't scouring Wikipedia for historical information or reviewing old news footage on YouTube. They were building a model of divided Germany with the help of one of the world's hottest video games: "Minecraft. " "It's really a great visual tool for presenting our knowledge, just like you would use something like PowerPoint to show off your research," said Arie Estrin, 12, who was assembling a nuclear submarine, block by digital block. "That's what we do with 'Minecraft.' A game like "Minecraft" might seem better suited for the rec room than the classroom, but more and more teachers are tapping its creative power to educate students in everything from history to engineering to biology. The results are frequently stunning. ISTE keynote: Gaming has huge educational potential. 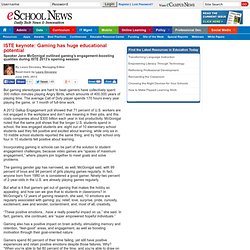 The average Call of Duty player spends 170 hours every year playing the game, or 1 month of full-time work. A 2012 Gallup Engagement poll showed that 71 percent of U.S. workers are not engaged in the workplace and don’t see meaning in their jobs, and this costs companies about $300 billion each year in lost productivity. Passion-Based Learning, Week 6: Minecraft and Makerspaces. Principal Matt Renwick is sharing weekly reflections about an afternoon computer club he and a teacher are sponsoring as an enrichment activity. 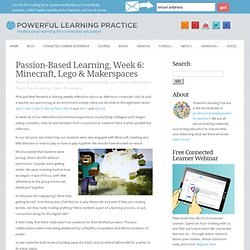 (Here are the links to this eight-part series: Part 1, Part 2, Part 3, Part 4, Part 5, Part 6 and Part 7 and Part 8.) Game-Based Learning articles and links. Who Needs Grownups to Make Video Games? Digital Tools Noah Ratcliff and Pamela Pizarro Ruiz/Fog The 16 student winners of the National STEM Video Game Challenge sponsored by the Joan Ganz Cooney Center and E-Line Media reflect an increasingly diverse group, in terms of geography, race and gender, of the participants. 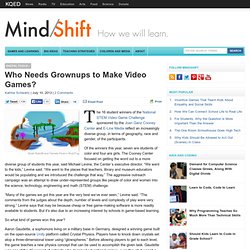 Of the winners this year, seven are students of color and four are girls. The Cooney Center focused on getting the word out to a more diverse group of students this year, said Michael Levine, the Center’s executive director.