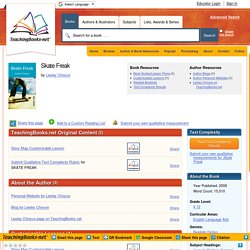 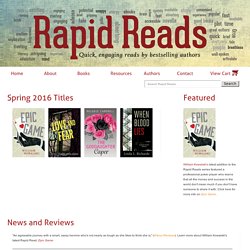 Learn more about William Kowalski's latest Rapid Read, Epic Game. Gina Gallo is back in The Goddaughter Caper, and this time she gets drawn into a body caper mystery against her better judgement. CM Magazine says, "Campbell creates a page-turner that is fast moving, exciting and filled with twists and turns...Highly Recommended.

" In her first novel featuring recurring sleuth Leena O’Neil, Dayle Campbell Gaetz "left readers on the edge of their seats with anticipation for Leena's next adventure. " —CM Magazine Read the full review of Disappearing Act. "Linda Richards’ strong female characters in If It Bleeds offer the reader a fresh and interesting perspective into the modern day life of a Vancouver greenhorn journalist in this page turning mystery. " William Kowalski takes home East Coast Literary Award! Game On by Bali Rai. Brock by Anthony McGowan. A moving tale of one boy’s determination to save a badger cub, and protect his brother, from the hands of the local thugs. 868 in stock Reading Age: 8+ Interest Age: Teen Longlisted for the 2014 Carnegie Medal! 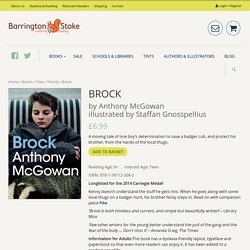 Kenny doesn’t understand the stuff he gets into. When he goes along with some local thugs on a badger hunt, his brother Nicky steps in. ‘Brock is both timeless and current, and simple but beautifully written’ – Library Mice ‘Few other writers for the young better understand the pull of the gang and the fear of the bully … Don’t miss it’ – Amanda Craig, The Times. Backlist Love: Gamer by Chris Bradford - Barrington Stoke. About the Book:It is the year 2030 and an unknown virus has wiped out millions of adults on the planet (for some reason it didn’t affect children), leaving vast numbers of kids to roam the streets homeless and starving. 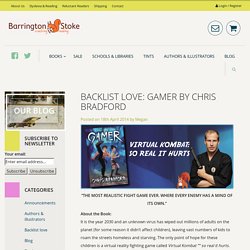 The only point of hope for these children is a virtual reality fighting game called Virtual Kombat ”“ so real it hurts. This game allows people to enter the world of Virtual Kombat and fight other players plugged into the arena, or just watch their favourite players battle it out with other fighters. The ultimate winner of the game receives fame and fortune ”“ a very tempting prize, especially to the starving kids roaming the streets. Since people are still afraid to leave their homes in fear the deadly virus will resurface, people stay inside as much as possible and play Virtual Kombat as a way to escape their lives of self-confinement. 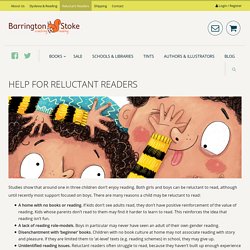 Both girls and boys can be reluctant to read, although until recently most support focused on boys. There are many reasons a child may be reluctant to read: A home with no books or reading. If kids don’t see adults read, they don’t have positive reinforcement of the value of reading. Getting Away With It by Anne Cassidy. Wrong Number by Chloe Rayban. The After School Club by Alison Davies. On the Edge by Nigel Hinton. Crow Girl Rises by Kate Cann. Dumb Chocolate Eyes by Kevin Brooks. Two Words by Tanya Landman. Pike by Anthony McGowan. Moose Baby by Meg Rosoff. Anzac Boys by Tony Bradman. Dyslexia & Reading - Barrington Stoke. Dyslexia is a learning difference that can affect the ability to read, write and spell. 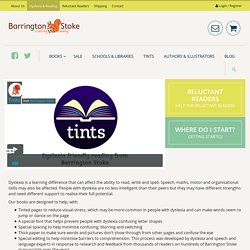 Speech, maths, motor and organisational skills may also be affected. People with dyslexia are no less intelligent than their peers but they may have different strengths and need different support to realise their full potential. Our books are designed to help, with: Tinted pages to reduce visual stress, which may be more common in people with dyslexia and can make words seem to jump or dance on the pageA special font that helps prevent people with dyslexia confusing letter shapesSpecial spacing to help minimise confusing, blurring and switchingThick paper to make sure words and pictures don’t show through from other pages and confuse the eyeSpecial editing to help minimise barriers to comprehension.

Backlist Love: Jon for Short by Malorie Blackman. The storyA boy wakes up in a hospital bed after a nightmare involving a dark room and a flashing knife, to find that another of his limbs is missing. 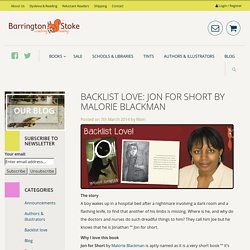 Where is he, and why do the doctors and nurses do such dreadful things to him? They call him Joe but he knows that he is Jonathan ”“ Jon for short. Why I love this bookJon for Short by Malorie Blackman is aptly named as it is a very short book ”“ it’s one of our reading age 7 titles for teens and clocks in at just 4,000 words. Despite its length, it deals with huge themes ”“ guilt, mental illness, the fragmentation of one boy’s self. I remember first reading it and shuddering, and it still has the same effect on me after all this time. Jon for Short was our first collaboration with the illustrator Vladimir Stankovic, whose work I had spotted on a blog some time before. As this element of the book came together, we showed Vladimir the ‘Addenbrooke’ series of drawings and paintings by the great Scottish artist John Bellany. Backlist Love: Gamer by Chris Bradford - Barrington Stoke.