Ultimate BIOS Guide: Every Setting Decrypted and Explained!: Page 8. When and Why to Update the BIOS Updating or flashing the BIOS carries a certain amount of risk, but the potential rewards make it worth the effort. 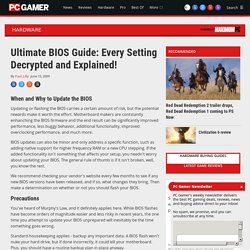 Motherboard makers are contstantly enhanching the BIOS firmware and the end result can be significantly improved performance, less buggy behavior, additional functionality, improved overclocking performance, and much more. BIOS updates can also be minor and only address a specific function, such as adding native support for higher frequency RAM or a new CPU stepping. If the added functionality isn't something that affects your setup, you needn't worry about updating your BIOS. The general rule of thumb is if it isn't broken, well, you know the rest. Ultimate BIOS Guide: Every Setting Decrypted and Explained!: Page 7. Intel X58 Chipset With the introduction of Nehalem -- now better known as Core i7 -- Intel moved away from a traditional frontside bus architecture in favor of an integrated memory controller, somewhat similar to what AMD had been using for years. 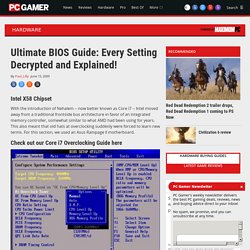 This also meant that old hats at overclocking suddenly were forced to learn new terms. For this section, we used an Asus Rampage II motherboard. Ultimate BIOS Guide: Every Setting Decrypted and Explained!: Page 6. AMD 790FX Chipset Starting with the Athlon 64, AMD moved away from a traditional frontside bus architecture in favor of using an integrated memory controller and a HyperTransport bus. 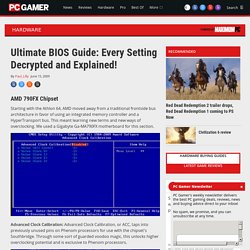 This meant learning new terms and new ways of overclocking. We used a Gigabyte Ga-MA790FX motherboard for this section. Advanced Clock Calibration: Advanced Clock Calibration, or ACC, taps into previously unused pins on Phenom processors for use with the chipset's Southbridge. Through some sort of guarded voodoo magic, this unlocks higher overclocking potential and is exclusive to Phenom processors. Ultimate BIOS Guide: Every Setting Decrypted and Explained!: Page 5. Overclocking If you're going to overclock, you first must understand the nomenclature that applies to your processor and motherboard chipset's architecture. 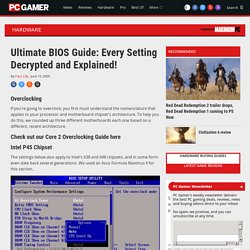 To help you do this, we rounded up three different motherboards each one based on a different, recent architecture. Check out our Core 2 Overclocking Guide here Intel P45 Chipset The settings below also apply to Intel's X38 and X48 chipsets, and in some form even date back several generations. Ai Overclock Tuner: Many enthusiast motherboards come with some form of automatic overclocking, and Asus calls its version the Ai Overclock Tuner.

Ultimate BIOS Guide: Every Setting Decrypted and Explained!: Page 4. Advanced CPU Features Gigabyte's latest boards clumps these entries together in a handy submenu, but depending on your make and model, you may find these settings spread out in different sections of your BIOS. 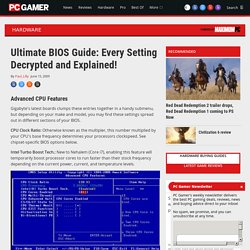 CPU Clock Ratio: Otherwise known as the multipler, this number multiplied by your CPU's base frequency determines your processors clockspeed. See chipset-specific BIOS options below. Intel Turbo Boost Tech.: New to Nehalem (Core i7), enabling this feature will temporarily boost processor cores to run faster than their stock frequency depending on the current power, current, and temperature levels.

CPU Cores Enabled: Allows you to enable all or just some of your processor's cores. CPU Multi-Threading: Enable this option to take advantage of Intel's HyperThreading technology. CPU Enhanced Halt (C1E) : A power saving feature in Intel chips, enabling C1E will allow the operating system to send a halt command to the CPU when inactive. Ultimate BIOS Guide: Every Setting Decrypted and Explained!: Page 3. Power Management With the recent push towards reducing carbon footprints and going green, power management schemes have started garnering a lot of attention. 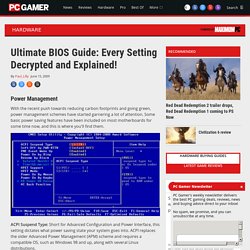 Some basic power saving features have been included on most motherboards for some time now, and this is where you'll find them. ACPI Suspend Type: Short for Advanced Configuration and Power Interface, this setting dictates what power saving state your system goes into. ACPI replaces the older Advanced Power Management (APM) scheme and requires a compatible OS, such as Windows 98 and up, along with several Linux distributions. S1(POS): In an S1 state, the CPU stops processing cycles but it, along with the RAM, are still fed power. Ultimate BIOS Guide: Every Setting Decrypted and Explained!: Page 2. Password Check: If you set a password, you can instruct your BIOS to ask for it either when booting the PC or when attempting to enter the BIOS. 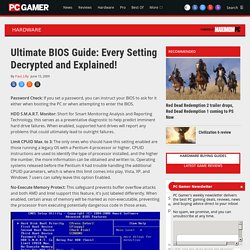 HDD S.M.A.R.T. Monitor: Short for Smart Monitoring Analysis and Reporting Technology, this serves as a preventative diagnostic to help predict imminent hard drive failures. When enabled, supported hard drives will report any problems that could ultimately lead to outright failures. Limit CPUID Max. to 3: The only ones who should have this setting enabled are those running a legacy OS with a Pentium 4 processor or higher. CPUID instructions are used to identify the type of processor installed, and the higher the number, the more information can be obtained and written to. Ultimate BIOS Guide: Every Setting Decrypted and Explained! Power users routinely punch into the BIOS in order to fine tune their system, but it can be an intimidating place to go exploring if you've never before burrowed beneath the surface. 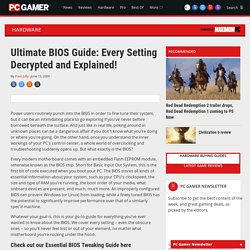 And just like in real life, poking around in unknown places can be a dangerous affair if you don't know what you're doing or where you're going. On the other hand, once you understand the inner workings of your PC's control center, a whole world of overclocking and troubleshooting suddenly opens up. But what exactly is the BIOS? Every modern motherboard comes with an embedded Flash EEPROM module, otherwise known as the BIOS chip. Short for Basic Input Out System, this is the first bit of code executed when you boot your PC.