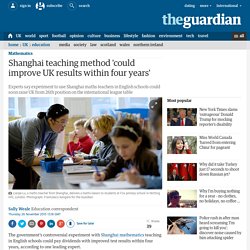 David Reynolds, professor of education at Southampton University, said it was “not beyond the realms of possibility” that UK pupils could post better scores in the next round of Pisa international tests in 2018 (and published the following year) thanks to the Shanghai-style teaching. The Department for Education (DfE) is in the second year of a Shanghai-England teacher exchange which aims to raise English pupils’ maths skills. Shanghai currently tops the international maths league table published by the OECD, while UK pupils lag behind in 26th position . Effectiveness of mathematics teaching: the truth about China and England. Building on last year’s BERA paper, this year, we are sharing the key findings from the completed EMT project. 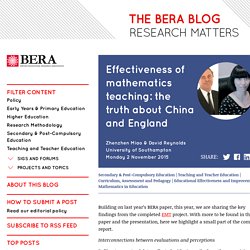 With more to be found in the paper and the presentation, here we highlight a small part of the complete report. Interconnections between evaluations and perceptions Pulling two parts of data collected with six methods, rather surprising findings emerge, challenging what we conventionally believe the English teaching and the Chinese teaching must be. For example, different strands of data and results join each other and suggest that English teachers are in fact pro direct transmission whereas Chinese teachers are pro constructivist. When so many genuinely believe that grouping/setting by “ability” is doing good to children, the study finds English teachers’ heavy use of this approach actually enlarges the performance gap amongst pupils of the same age over time. 'Disastrous' focus on memorising times tables doesn't add up, argues top Stanford maths expert. Giving children tests on their times tables is creating "huge damage", a leading educationalist said today. 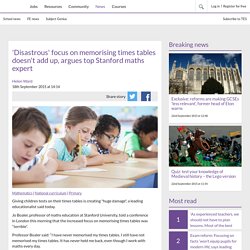 Jo Boaler, professor of maths education at Stanford University, told a conference in London this morning that the increased focus on memorising times tables was “terrible”. ‘It is wrong to tell children that they do not need to memorise their times tables’ I disagree strongly with Ms Boaler’s stance, reported in TES last week, on children learning their times tables. 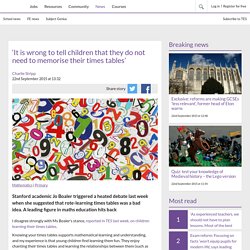 Knowing your times tables supports mathematical learning and understanding, and my experience is that young children find learning them fun. New core maths exam course to include skills such as dividing bills. How to divide a restaurant bill between friends is among the practical skills to be taught in the government’s new core maths examination, aimed at filling the gap in qualifications for pupils staying on at school in England past the age of 16. 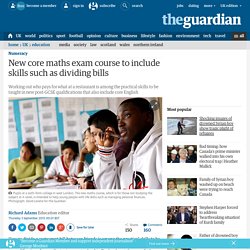 The new courses, intended for students who have passed GCSEs but who do not intend to take higher-level maths at A-level, will teach pupils how to calculate interest rates and understand statistics, as well as the fraught process of figuring out how much those who didn’t have any wine should contribute. According to the Department for Education (DfE), which is launching the new qualification to be taught from Thursday, the new course is intended to help pupils in real-life situations and increase their confidence in managing their personal finances. The need for the new qualification comes from changes to the school leaving age, which was previously set at 16, when students take GCSEs. Under the new system, a good grade-C pass becomes a grade 5. Fermi problems. Can you solve the bridge riddle? - Alex Gendler. Back to School Maths Collection. 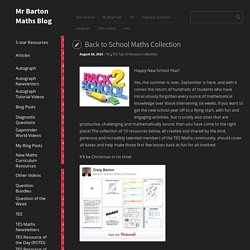 Yes, the summer is over, September is here, and with it comes the return of hundreds of students who have miraculously forgotten every ounce of mathematical knowledge over those intervening six weeks. If you want to get the new school year off to a flying start, with fun and engaging activities, but crucially also ones that are productive, challenging and mathematically sound, then you have come to the right place! The collection of 10 resources below, all created and shared by the kind, generous and incredibly talented members of the TES Maths community, should cover all bases and help make those first few lesson back as fun for all involved. Forty-thousand years of Indigenous maths can get kids into numbers today. I am deeply concerned with the direction of Indigenous education in Australia and how mathematics education has been positioned in relation to Aboriginal and Torres Strait Islander peoples. 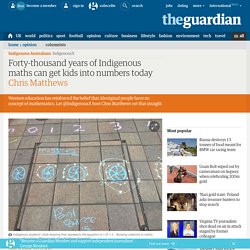 I have a different vision for Indigenous education in mathematics; it’s a vision based on connecting culture and mathematics. I’m from the Quandamooka people of Minjerribah (Stradbroke Island, Queensland). I have a PhD in applied mathematics and I’m currently a senior lecturer at Griffith University, Brisbane, Queensland. I’m also the chair of the Aboriginal and Torres Strait Islander Mathematics Alliance (Atsima), which is a newly formed not-for-profit organisation with the vision for “All Aboriginal and Torres Strait Islander learners will be successful in mathematics.” This success can only be achieved by understanding mathematics from a cultural perspective and creating a mathematics education that supports the cultural identity of our youth, and of all learners. Mobile.nytimes. Well Workouts A free mobile app for the popular Scientific 7-Minute Workout and the new Advanced 7-Minute Workout. 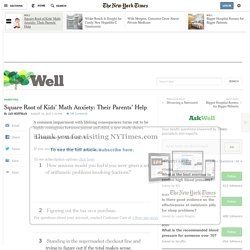 The Well Guide to Activity Trackers We tested some of the latest and most popular trackers to compare how they work and the various features they offer. Here’s what we found. A common impairment with lifelong consequences turns out to be highly contagious between parent and child, a new study shows. A History of Maths.

Doesn't it feel like mathematics was created and done the day before you were born? 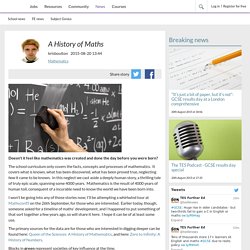 The school curriculum only covers the facts, concepts and processes of mathematics. It covers what is known, what has been discovered, what has been proved true, neglecting how​ it came to be known. In this neglect we cast aside a deeply human story, a thrilling tale of truly epic scale, spanning some 4000 years.

A new baccalaureate-style qualification for 16- to 18-year-olds could encourage students to keep studying maths for longer, according to the new head of an influential Parliamentary committee. 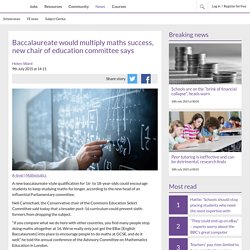 Neil Carmichael, the Conservative chair of the Commons Education Select Committee said today that a broader post-16 curriculum could prevent sixth-formers from dropping the subject. “If you compare what we do here with other countries, you find many people stop doing maths altogether at 16. Philosophical discussions boost pupils' maths and literacy progress, study finds. Philosophical discussions about truth, fairness or kindness appear to give a small but significant boost to the maths and literacy progress of primary school pupils, although experts remain puzzled as to why. More than 3,000 pupils in 48 state primary schools across England took part in a year-long trial as part of a study named “philosophy for children”, and found that their maths and reading levels benefited by the equivalent of two months’ worth of teaching. A Durham University evaluation said the results showed faster rates of progress for pupils eligible for free school meals, suggesting that the technique could “be used to reduce the attainment gap in terms of poverty in the short term”.

In the trial, key stage two classes of pupils aged between 8 and 11 were given regular classroom sessions featuring pupil-led discussions on topics such as fairness or bullying. Teachers received special training to act as moderators, while the children sat in a discussion circle. MEI > Teachers > Realistic Mathematics Education (RME) What is Realistic Mathematics Education? The features of RME include the following. Use of realistic situations to develop mathematicsWell researched activities encourage pupils to move from informal to formal representationsLess emphasis on algorithms, more on making senseUse of 'guided reinvention'Progress towards formal ideas seen as a long-term process Introductory video to supporting textbooks. Numeracy crisis threatens to hold back UK in global data race. The government has been urged to tackle a numeracy crisis in the UK, which experts are warning threatens to hold the country back in the face of a global data revolution.

There needs to be a dramatic improvement in the population’s grasp of basic numeracy and statistics if the UK is to keep up with its neighbours and make the most of the potential offered by “big data”, says a report by the British Academy published on Thursday. It calls for a transformation in the UK’s approach to building numeracy, statistics and data analysis skills to ensure that students, consumers and workers are as fluent with numbers as they are with words. The report, entitled Count Us In, focuses on the need for current workers and future generations to develop quantitative skills in order to understand and interpret the vast quantities of data being generated. It says the UK has the potential to become a world leader in big data, which would in turn lead to enormous economic benefits.

Edit Your Details - FENews.co.uk. #OfstedMaths Twitter chat (with image, tweets) · Ofsted. Maths Game: Revision for KS3 and KS4. Math games. Singapore maths effect is small but potentially powerful, study finds. A Singaporean "mastery" approach to maths improves children’s skills and could provide a long-term economic benefit, new research suggests. The improvement seen in schools using the Mathematics Mastery programme is equivalent to one month’s additional progress, but a new analysis of the potential economic benefits of the programme predicts that even an extra month of progress at age 10 could increase adults' average wages by around £150 to £200 a year. Interest in the way maths is taught in East Asia has been sparked by the success of Shanghai, Singapore, Japan, Hong Kong and South Korea in the Pisa (Programme for International Student Assessment) rankings. The Mathematics Mastery programme, which is based on teaching methods from Singapore, has been adopted by the Ark academy chain and was evaluated by John Jerrim, reader in educational and social statistics at the UCL Institute of Education and Anna Vignoles, professor of education at the University of Cambridge.

English pupil's maths scores improve under east Asian approach. Schools in England experimenting with east Asian teaching methods have seen an improvement in children’s mathematics skills after just one year, according to a study. The research, published on Thursday, which represents the first hard evidence that introducing a Singaporean “maths mastery” approach into English classrooms can influence results, found a “relatively small but welcome improvement” in children’s performance. The report’s lead author warned however that the mastery programme should not be seen as “a silver bullet” and called for it to be tested over a longer period in a greater number of schools in order to build a fuller picture. Policymakers have been studying teaching methods in east Asian countries such as Singapore, Japan and South Korea, which dominate the Pisa international league tables measuring children’s academic achievement. Embedding Functional Skills into Motor Vehicle Studies. Links to useful sites - emskills.org.uk.