The Ultimate Guide to Sending Email in Laravel. Sending emails in web applications has become so essential. 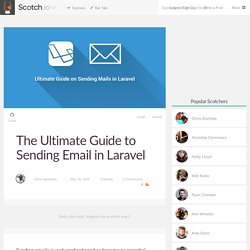 Marketing, notifications, newsletters, adverts, etc are some of the reasons why we send emails to our clients. I'd say the majority of websites send automated emails at least via a "Contact us" form. Laravel based CMSs and open source applications that we should know! Here is an awesome curated list of open-source projects and CMSs built with the Laravel PHP framework. 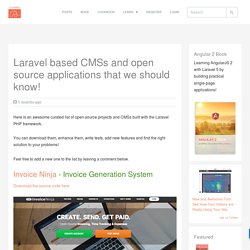 You can download them, enhance them, write tests, add new features and find the right solution to your problems! Feel free to add a new one to the list by leaving a comment below. Invoice Ninja - Invoice Generation System Download the source code here Koel - A personal music streaming server that works. Laravel Recipes. Processing the Search and Displaying the Results. Forums - Laravel France. GitHub - thujohn/rss-l4: RSS builder for Laravel 4. The Laravel Daily. Deployer — Deployment Tool for PHP. Laravel 5.2 tutorial for beginner, Implicit Route Binding. Hirak/prestissimo - PHP - GitHub. WordPress and Laravel. WordPress is one of the most popular open source applications and that means many people are comfortable using its admin to manage their site. 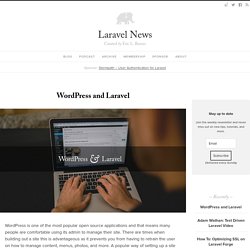 There are times when building out a site this is advantageous as it prevents you from having to retrain the user on how to manage content, menus, photos, and more. A popular way of setting up a site like this is to use WordPress as the admin and then build out the frontend in a framework such as Laravel. Let’s take a look some packages that make working with WordPress easy: WordPress Corcel. Flashy/readme.md at master · mercuryseries/flashy. Learning Laravel. Database seeding in Laravel 4 using randomuser.me - Creative Punch. Introduction Database seeding in Laravel 4 can be quite cumbersome for things such as user information. 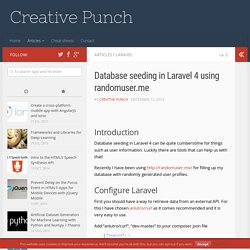 Luckily there are tools that can help us with that! Recently I have been using for filling up my database with randomly generated user profiles. QuickAdmin: package to build Laravel adminpanel in minutes - Laravel Daily. Today is an important day for me – I want to introduce to you a new Laravel package created by myself and my team. 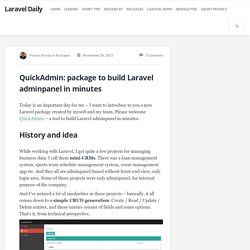 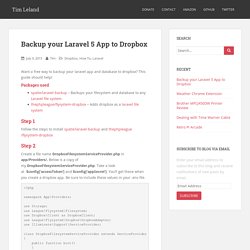 This guide should help! Packages used. Maintenance Mode and Whitelists in Laravel 4. When developing web applications on your local web server you are pretty safe, nobody except you will notice your bugs. 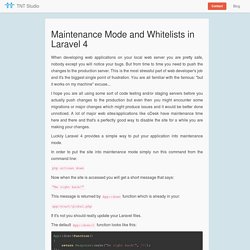 But from time to time you need to push the changes to the production server. This is the most stressful part of web developer's job and it's the biggest single point of frustration. You are all familiar with the famous: "but it works on my machine" excuse... I hope you are all using some sort of code testing and/or staging servers before you actually push changes to the production but even then you might encounter some migrations or major changes which might produce issues and it would be better done unnoticed.

StydeNet/blade-pagination. Announcing Version 1. Cachet has finally made it to version 1, and it's available right now! 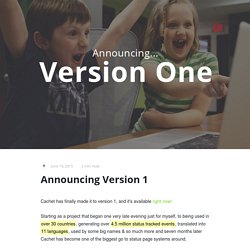 Starting as a project that began one very late evening just for myself, to being used in , generating over , translated into , used by some big names & so much more and seven months later Cachet has become one of the biggest go to status page systems around. We've been featured on Hacker News twice, ProductHunt, various sub-Reddits, picked up by Smashing Mag and received positive feedback from so many people! Cachet ships with some pretty big features: Subscriber email notificationsA RESTful, JSON powered APIMultiple members supportTwo factor authenticationComponent groupingBasic metricsMySQL, PostgreSQL and SQLite supportGoogle Analytics, GoSquared and Piwik tracking codesCustom theme colours and stylesheetsIncident templatesScheduled maintenanceOptional anonymous usage tracking And we're just getting started! Excluding ourselves, there have been 50 individual contributors to Cachet. Until then, thank you! Excluding Routes from the CSRF Middleware.

Laravel has CSRF enabled by default for all requests that come through your app. 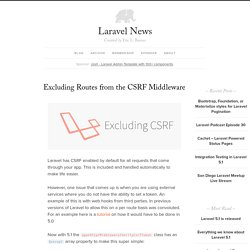 This is included and handled automatically to make life easier. However, one issue that comes up is when you are using external services where you do not have the ability to set a token. An example of this is with web hooks from third parties. StydeNet/blade-pagination. New Features in Laravel 5.1 - Matt Stauffer on Laravel, PHP, Frontend development. 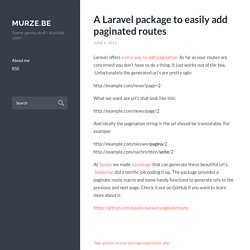 As far as your routes are concerned you don’t have to do a thing. It just works out of the box. Unfortunately the generated url’s are pretty ugly: Laravel 5.1 is released. Laravel has just announced the immediate availability of v5.1. This marks the first release in Laravel’s history to offer long-time support.

Let’s look at some of the new features and also learn more about it directly from Taylor Otwell. Long Term Support Since originally launching in 2011, Laravel has always followed the “release early, release often” mantra which is popular in open source applications. With the historic rise in popularity of the framework, it was time to start focusing on the needs of large organizations and mission-critical applications that need security fixes but can’t upgrade quickly.

The long-term support is arguably the biggest feature in 5.1, but it includes several other new features. Announcing release of Laravel-tricks.com Source! - Maks Surguy's blog on PHP and Laravel. Today my friend Stidges and I are making a small contribution to open source community. We are releasing the source code of a website that the two of us created together called Laravel Tricks.

The purpose of the website is to give the Laravel community ability to create small code snippets that could be helpful to other developers. This website has been live for a few months now and have been visited by more than 10,000 people with over 80 tips & tricks created by users since its launch. Laravel 5.1 is released - Laravel News.

Note: Si vous utilisez Windows, vous devrez peut-être activer la virtualisation matérielle (VT-x). Documentation/homestead.md at master · laravel-france/documentation. Laravel Homestead: 403 forbidden on nginx. [SOLVED] Vagrant stuck connection timeout retrying. I had exact the same problem. I thought the problem might be with SSH keys (wrong localization of file or something else but I checked it many times) but you may always add in configure section username and password (without using ssh keys) and running gui so the code in Vagrantfile should look like more or less as below: Vagrant.configure(VAGRANTFILE_API_VERSION) do |config| config.ssh.username = "vagrant" config.ssh.password = "vagrant" config.vm.provider "virtualbox" do |vb| vb.gui = true endend In my case even if GUI was displayed I got black screen (no errors or possibility to login or anything else) and in console I got the Error: Connection timeout.

Retrying... many times. I made sure I had VT-x (virtualization) enabled in BIOS, I checked many combinations of versions of both Virtual Box and Vagrant together and many Vagrant boxes (for some of them I didn't have black screen in GUI but still have connection problems). Laravel Video Tutorials and Source Code. Hello, I’ve created some Laravel video tutorials which you can find on my Youtube account in which I show you how I use the Laravel framework. I currently have 10 videos covering Laravel installation, configuration, basic routing and controller interaction, views, layouts, the blade templating engine, CRUD to retrieve, insert new data, update data, and delete data, as well as validating data in the model, and security.

You can download my Laravel tutorial source code for my videos below. Laravel Tutorial Part 1 – Installation and Configuration This is my first video tutorial to show you guys how to install and configure the MVC PHP framework Laravel. I discuss where to get the framework, installation, configuration options, and how to connect to a database as well as how to enable mod_rewrite for clean URL’s. Caouecs/Laravel-lang. Crinsane/LaravelShoppingcart. SublimeCodeIntel. Code intelligence plugin ported from Open Komodo Editor to Sublime Text. Supports all the languages Komodo Editor supports for Code Intelligence (CIX, CodeIntel2): JavaScript, Mason, XBL, XUL, RHTML, SCSS, Python, HTML, Ruby, Python3, XML, XSLT, Django, HTML5, Perl, CSS, Twig, Less, Smarty, Node.js, Tcl, TemplateToolkit, PHP. Provides the following features: Jump to Symbol Definition - Jump to the file and line of the definition of a symbol.Imports autocomplete - Shows autocomplete with the available modules/symbols in real time.Function Call tooltips - Displays information in the status bar about the working function.