Pompeii Online. Pompeii In Pictures. Use the form below to search for documents in this Web site containing specific words or combinations of words. 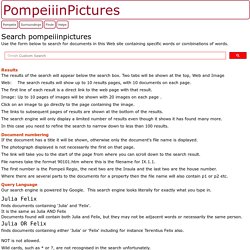 Results The results of the search will appear below the search box. Two tabs will be shown at the top, Web and Image Web: The search results will show up to 10 results pages, with 10 documents on each page. The first line of each result is a direct link to the web page with that result. Image: Up to 10 pages of images will be shown with 20 images on each page . Click on an image to go directly to the page containing the image.

The links to subsequent pages of results are shown at the bottom of the results. The search engine will only display a limited number of results even though it shows it has found many more. In this case you need to refine the search to narrow down to less than 100 results. Document numbering If the document has a title it will be shown, otherwise only the document's file name is displayed. The photograph displayed is not necessarily the first on that page. Tips. A Guide to the Pompeii Excavations 2. Pompeii - Public Buildings - AD79 eruption. Pompei - Pompeii Sites. Pompeii - A Visitor's Guide. Visitors to Naples and its surrounding area could be overwhelmed by the number of archaeological wonders to see. 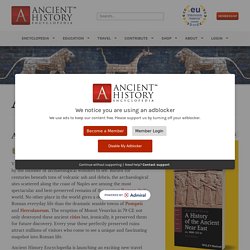 Buried for centuries beneath tons of volcanic ash and debris, the archaeological sites scattered along the coast of Naples are among the most spectacular and best-preserved remains of the ancient Roman-Italic world. No other place in the world gives a deeper insight into Roman everyday life than the dramatic seaside towns of Pompeii and Herculaneum.

The eruption of Mount Vesuvius in 79 CE not only destroyed these ancient cities but, ironically, it preserved them for future discovery. Every year these perfectly preserved ruins attract millions of visitors who come to see a unique and fascinating snapshot into Roman life. Ancient History Encyclopedia is launching an exciting new travel series devoted to the archaeological sites around the Bay of Naples. A Prosperous City Of Pompeii's original 66 hectares, 44 have now been excavated, & excavations are continuing to this day. 1. The Fall and Rise and Fall of Pompeii. On a sweltering summer afternoon, Antonio Irlando leads me down the Via dell’Abbondanza, the main thoroughfare in first-century Pompeii. 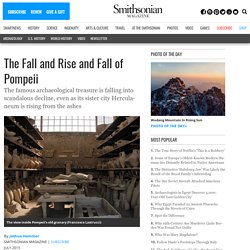 The architect and conservation activist gingerly makes his way over huge, uneven paving stones that once bore the weight of horse-drawn chariots. We pass stone houses richly decorated with interior mosaics and frescoes, and a two-millennial-old snack bar, or Thermopolium, where workmen long ago stopped for lunchtime pick-me-ups of cheese and honey. Abruptly, we reach an orange-mesh barricade. “Vietato L’Ingresso,” the sign says—entry forbidden. It marks the end of the road for visitors to this storied corner of ancient Rome. 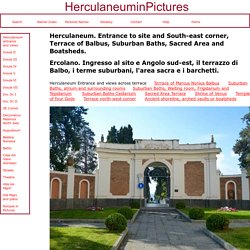 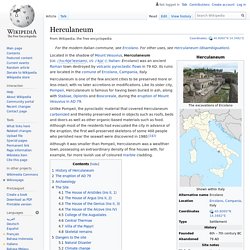 Its ruins are located in the comune of Ercolano, Campania, Italy. Herculaneum is one of the few ancient cities to be preserved more or less intact, with no later accretions or modifications. Like its sister city, Pompeii, Herculaneum is famous for having been buried in ash, along with Stabiae, Oplontis and Boscoreale, during the eruption of Mount Vesuvius in AD 79. Unlike Pompeii, the pyroclastic material that covered Herculaneum carbonized and thereby preserved wood in objects such as roofs, beds and doors as well as other organic-based materials such as food.

Although it was smaller than Pompeii, Herculaneum was a wealthier town, possessing an extraordinary density of fine houses with, for example, far more lavish use of coloured marble cladding. Herculaneum archaeological site – Naples. Herculaneum Conservation Project. Map of Herculaneum - AD79eruption. Because of the manner of its burial and the fact that it lies beneath a populated area, the exact size of Herculaneum is still unknown, but it appears to extend over an area roughly 320m by 350m. 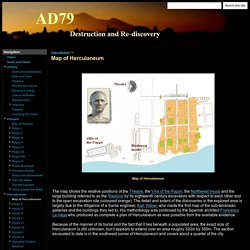