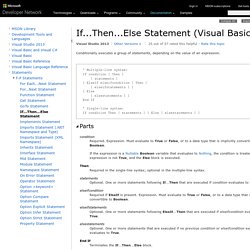 Expression. Must evaluate to True or False, or to a data type that is implicitly convertible to Boolean. If the expression is a Nullable Boolean variable that evaluates to Nothing, the condition is treated as if the expression is not True, and the Else block is executed. Parameters Collection (ADO) FIND Function. MS Access 2003: Create a parameter query that performs a wildcard search. Parameters Collection (ADO) Command Object Parameters. 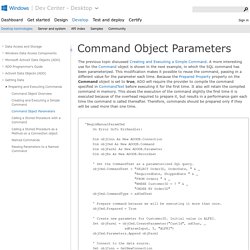 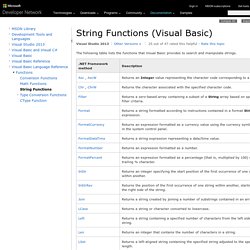 You can use the Option Compare statement to set whether strings are compared using a case-insensitive text sort order determined by your system's locale (Text) or by the internal binary representations of the characters (Binary). The default text comparison method is Binary. This example uses the UCase function to return an uppercase version of a string. ' String to convert. 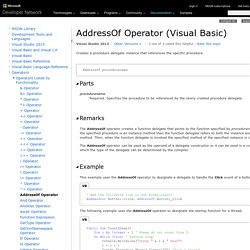 Specifies the procedure to be referenced by the newly created procedure delegate. The AddressOf operator creates a function delegate that points to the function specified by procedurename. When the specified procedure is an instance method then the function delegate refers to both the instance and the method. The AddressOf operator can be used as the operand of a delegate constructor or it can be used in a context in which the type of the delegate can be determined by the compiler. 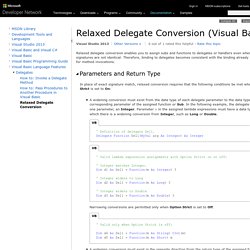 Therefore, binding to delegates becomes consistent with the binding already allowed for method invocations. In place of exact signature match, relaxed conversion requires that the following conditions be met when Option Strict is set to On: A widening conversion must exist from the data type of each delegate parameter to the data type of the corresponding parameter of the assigned function or Sub. In the following example, the delegate Del1 has one parameter, an Integer. Parameter m in the assigned lambda expressions must have a data type for which there is a widening conversion from Integer, such as Long or Double. ' Definition of delegate Del1. If Option Strict is set to Off, the widening restriction is removed in both directions. How to: Pass Procedures to Another Procedure in Visual Basic. 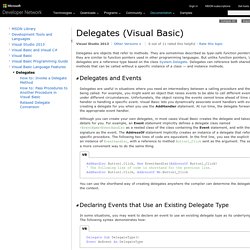 For example, you might want an object that raises events to be able to call different event handlers under different circumstances. Although you can create your own delegates, in most cases Visual Basic creates the delegate and takes care of the details for you. AddHandler Button1.Click, New EventHandler(AddressOf Button1_Click) ' The following line of code is shorthand for the previous line. AddressOf [expression.]methodName. Vb6 - How to call a function with function name reference to a string value in VB.