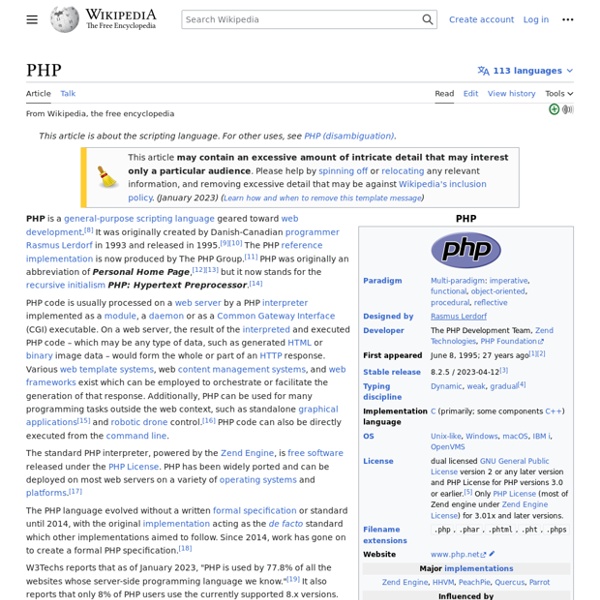 server-side scripting language PHP: Hypertext Preprocessor (or simply PHP) is a server-side scripting language designed for Web development. It was originally created by Rasmus Lerdorf in 1994;[4] the PHP reference implementation is now produced by The PHP Group.[5] PHP originally stood for Personal Home Page,[4] but it now stands for the recursive initialism PHP: Hypertext Preprocessor.[6] The standard PHP interpreter, powered by the Zend Engine, is free software released under the PHP License. PHP has been widely ported and can be deployed on most web servers on almost every operating system and platform, free of charge.[8] The PHP language evolved without a written formal specification or standard until 2014, with the original implementation acting as the de facto standard which other implementations aimed to follow. History[edit] Early history[edit] PHP/FI could be used to build simple, dynamic web applications. PHP 3 and 4[edit] PHP 5[edit] PHP 6 and Unicode[edit] PHP 7[edit] Mascot[edit]

PHP Programming PHP is a scripting language designed to fill the gap between SSI (Server Side Includes) and Perl, intended for the web environment. Its principal application is the implementation of web pages having dynamic content. PHP has gained quite a following in recent times, and it is one of the frontrunners in the Open Source software movement. Its popularity derives from its C-like syntax, and its simplicity. PHP is currently divided into two major versions: PHP 4 and PHP 5, although PHP 4 is deprecated and is no longer developed or supplied with critical bug fixes. If you've ever been to a website that prompts you to login, you've probably encountered a server-side scripting language. Basically, PHP allows a static webpage to become dynamic. Before you embark on the wonderful journey of Server Side Processing, it is recommended that you have a basic understanding of the HyperText Markup Language. Setup and Installation Note: Before contributing, check out the discussion page. The Basics

Hypertext Transfer Protocol The Hypertext Transfer Protocol (HTTP) is an application protocol for distributed, collaborative, hypermedia information systems.[1] HTTP is the foundation of data communication for the World Wide Web. The standards development of HTTP was coordinated by the Internet Engineering Task Force (IETF) and the World Wide Web Consortium (W3C), culminating in the publication of a series of Requests for Comments (RFCs), most notably RFC 2616 (June 1999), which defined HTTP/1.1, the version of HTTP most commonly used today. In June 2014, RFC 2616 was retired and HTTP/1.1 was redefined by RFCs 7230, 7231, 7232, 7233, 7234, and 7235.[2] HTTP/2 is currently in draft form. Technical overview[edit] URL beginning with the HTTP scheme and the WWW domain name label. A web browser is an example of a user agent (UA). HTTP is designed to permit intermediate network elements to improve or enable communications between clients and servers. History[edit] The first documented version of HTTP was HTTP V0.9 (1991).

VsPhp This page was copied mindlessly from (Google Cache) Common Ground Both PHP and Python: are interpreted, high level languages with dynamic typing are OpenSource (except where various Zend products, recommended by some, are employed) are supported by large developer communities are easy to learn (compared to C++, Perl) are easy to extend in C, C++ and Java are extremely portable. They run on almost all platforms in existence without recompilation. support for variable number of function arguments. have the ability to freeze live objects in a string representation (for storing arbitrary objects on disk, moving them over the network, etc); they can then be converted back to identical objects with data intact. Compared as Languages What strengths do PHP have that Python doesn't? What weaknesses does PHP have that Python doesn't? (more verbose) syntax from C/C++ and Perl, with lots curly braces and dollar signs and "->"-s confused tableau of function names.

Internet Protocol This article is about the IP network protocol only. For Internet architecture or other protocols, see Internet protocol suite. The Internet Protocol (IP) is the principal communications protocol in the Internet protocol suite for relaying datagrams across network boundaries. Historically, IP was the connectionless datagram service in the original Transmission Control Program introduced by Vint Cerf and Bob Kahn in 1974; the other being the connection-oriented Transmission Control Protocol (TCP). The first major version of IP, Internet Protocol Version 4 (IPv4), is the dominant protocol of the Internet. Function[edit] The Internet Protocol is responsible for addressing hosts and for routing datagrams (packets) from a source host to a destination host across one or more IP networks. Datagram construction[edit] Sample encapsulation of application data from UDP to a Link protocol frame IP addressing and routing[edit] IP routing is also common in local networks. Reliability[edit] Security[edit]

Command line usage Spawning php-win.exe as a child process to handle scripting in Windows applications has a few quirks (all having to do with pipes between Windows apps and console apps). To do this in C++: // We will run php.exe as a child process after creating // two pipes and attaching them to stdin and stdout // of the child process // Define sa struct such that child inherits our handles SECURITY_ATTRIBUTES sa = { sizeof(SECURITY_ATTRIBUTES) }; sa.bInheritHandle = TRUE; sa.lpSecurityDescriptor = NULL; // Create the handles for our two pipes (two handles per pipe, one for each end) // We will have one pipe for stdin, and one for stdout, each with a READ and WRITE end HANDLE hStdoutRd, hStdoutWr, hStdinRd, hStdinWr; // Now create the pipes, and make them inheritable CreatePipe (&hStdoutRd, &hStdoutWr, &sa, 0)) SetHandleInformation(hStdoutRd, HANDLE_FLAG_INHERIT, 0); CreatePipe (&hStdinRd, &hStdinWr, &sa, 0) SetHandleInformation(hStdinWr, HANDLE_FLAG_INHERIT, 0); std::string processed(""); char buf[128];