2600: The Hacker Quarterly. 2600: The Hacker Quarterly is an American publication that specializes in publishing technical information on a variety of subjects including telephone switching systems, Internet protocols and services, as well as general news concerning the computer "underground" and left wing, and sometimes (but not recently), anarchist issues. 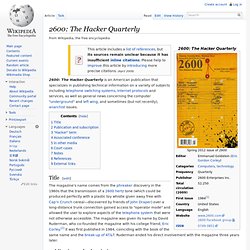 Title[edit] The magazine's name comes from the phreaker discovery in the 1960s that the transmission of a 2600 hertz tone (which could be produced perfectly with a plastic toy whistle given away free with Cap'n Crunch cereal—discovered by friends of John Draper) over a long-distance trunk connection gained access to "operator mode" and allowed the user to explore aspects of the telephone system that were not otherwise accessible. The magazine was given its name by David Ruderman, who co-founded the magazine with his college friend, Eric Corley.[2] It was first published in 1984, coinciding with the book of the same name and the break-up of AT&T. Hackers on Planet Earth. The Last HOPE, 2008 Conferences[edit] HOPE: Hackers On Planet Earth[edit] Held 13–14 August 1994 at the Hotel Pennsylvania, the first HOPE conference marked 2600: The Hacker Quarterly's 10th anniversary.

Over 1,000 people attended, including speakers from around the world. Access to a 28.8 kbit/s local network was provided.[5] Beyond HOPE[edit] H2K[edit] The 14–15 July 2000 HOPE returned to the Hotel Pennsylvania, where subsequent conferences have been held. H2K2[edit] H2K2, 12–14 July 2002, had a theme focused on U.S. The Fifth HOPE[edit] HOPE Number Six[edit] HOPE Number Six, 21–23 July 2006, included talks from Richard Stallman and Jello Biafra.[15] Kevin Mitnick was scheduled to be at the conference but was unable to appear: while on vacation in Colombia an illness prevented his timely return to the U.S. Steve Rambam, a private investigator heading Pallorium, Inc., an online investigative service, was scheduled to lead a panel discussion titled "Privacy is Dead... Tor Project (Core People) The organization consists of many volunteers and a few employees. 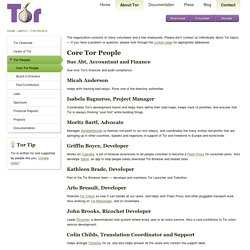 Please don't contact us individually about Tor topics — if you have a problem or question, please look through the contact page for appropriate addresses. Sue Abt, Accountant and Finance Sue runs Tor's finances and audit compliance. Micah Anderson Helps with tracking bad relays. Isabela Bagueros, Project Manager Coordinates Tor's development teams and helps them define their road maps, keeps track of priorities, and ensures that Tor is always thinking “user first” while building things. Moritz Bartl, Advocate Manages Zwiebelfreunde (a German non-profit to run exit relays), and coordinates the many similar non-profits that are springing up in other countries. Griffin Boyce, Developer Works on Cupcake, a set of browser extensions to let people volunteer to become a Flash Proxy for censored users. 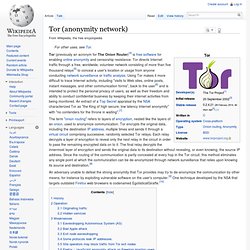 An extract of a Top Secret appraisal by the NSA characterized Tor as "the King of high secure, low latency Internet anonymity" with "no contenders for the throne in waiting".[7] Alice's Tor client picks a random path to destination server Steven J. Why NSA Spying Affects You. Sunday's Snowden leaks detailing the Tailored Access Operations group -- the NSA's exploit-farming, computer-attacking "plumbers" -- and the ANT's catalog of attacks on common computer equipment and software -- were accompanied by a lecture by Jacob Appelbaum at the 30th Chaos Communications Congress. 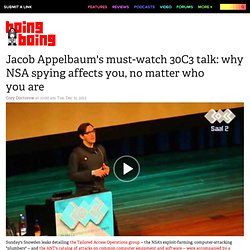 I have seen Jake speak many times, but this talk is extraordinary, even by his standards, and should by watched by anyone who's said, "Well, they're probably not spying on me, personally;" or "What's the big deal about spies figuring out how to attack computers used by bad guys? " or "It's OK if spies discover back-doors and keep them secret, because no one else will ever find them. " Wikipedia: Jacob Appelbaum. He is currently living in Berlin and he has been contributing extensively in the selection for publication of documents revealed by Edward Snowden in June 2013.[7][7][7][8][9] On December 28, 2013, at Chaos Communication Congress,[8][10] he presented documents revealed by Snowden, showing that the NSA can turn iPhones into eavesdropping tools and has developed devices to harvest electronic information from computer even if not online. 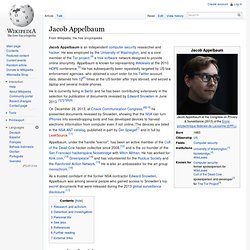 The devices are listed in the NSA ANT catalog, published in part by Der Spiegel[7] and in full by LeakSource.[11] Appelbaum, under the handle "ioerror", has been an active member of the Cult of the Dead Cow hacker collective since 2008,[12] and is the co-founder of the San Francisco hackerspace Noisebridge with Mitch Altman. He has worked for Kink.com,[13] Greenpeace[14] and has volunteered for the Ruckus Society and the Rainforest Action Network.[15] He is also an ambassador for the art group monochrom.[16]