911 from other pearlers. Post 911. The Saudi Connection (911) "28 paes" (911 Saudi Connection) Declassified CIA Document Reveals Iraq War Had Zero Justification. The justification for going to war in Iraq thirteen years ago, was based on a 93-page classified document that allegedly contained “specific information” on former Iraqi leader President Saddam Hussein and the weapons of mass destruction (WMD) programs he was apparently running. 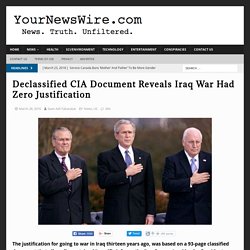 Now that document has been declassified and it reveals that there was virtually zero justification for the Iraq war. The document reveals that there was “no operational tie between Saddam and al Qaeda” and no WMD programs. The report reveals that the intelligence community and the US Department of Energy did not think Saddam was pursuing any type of WMD program, and was instead developing rocket motors. Vice.com reports: The CIA released a copy of the NIE in 2004 in response to a Freedom of Information Act (FOIA) request, but redacted virtually all of it, citing a threat to national security.

Conspiracy anyone? Inside the NSA’s 9/11 cover-up. “All tricksters, other than magicians, depend to a great extent upon the fact that they are not known to be, or even suspected of being, tricksters. 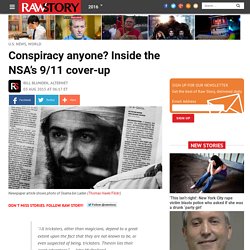 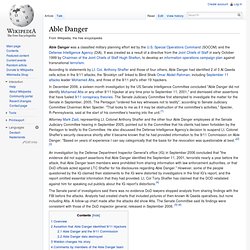 Special Operations Command (SOCOM) and the Defense Intelligence Agency (DIA). It was created as a result of a directive from the Joint Chiefs of Staff in early October 1999 by Chairman of the Joint Chiefs of Staff Hugh Shelton, to develop an information operations campaign plan against transnational terrorism. In December 2006, a sixteen-month investigation by the US Senate Intelligence Committee concluded "Able Danger did not identify Mohamed Atta or any other 9/11 hijacker at any time prior to September 11, 2001," and dismissed other assertions that have fueled 9/11 conspiracy theories. The Senate Judiciary Committee first attempted to investigate the matter for the Senate in September, 2005. The Pentagon "ordered five key witnesses not to testify", according to Senate Judiciary Committee Chairman Arlen Specter. Attorney Mark Zaid, representing Lt. Overview[edit] Mr. Able Danger and the 9/11 Commission[edit] [edit] Photos du journal - The Voice of Russia.

FBI knew about Al Qaeda terrorist attacks on US years before 9/11 - report. The FBI informant had worked as a driver and a confidant of the radical Egyptian preacher Omar Abdel Rahman, the blind shiekh serving life in prison for the 1993 attack on the World Trade Center in New York. 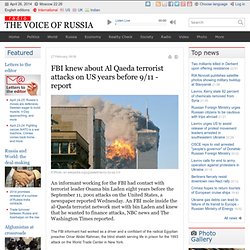 Rahman allegedly told the informant "If you need money, go directly to Osama and tell him that I sent you. " According to the reports, neither Congress nor the 9/11 Commission knew about the mole despite extensive investigations into the attack, which killed nearly 3,000 people. "It was the only source I know in the bureau where we had a source right in al Qaeda, directly involved," Ed Curran, who was the assistant special agent in charge of the FBI’s Los Angeles office at the time, said at the court, according to excerpts of testimony published by the Washington Times. Curran said the agent handling the source got the source to go overseas and meet with bin Laden, and that bin Laden told the source he had "picked out" a Masonic Lodge in LA for an "explosion.

" Where Is the Great Al Qaeda Courtroom Drama? This is a country that likes trials of the century—a couple of them a year, if possible. 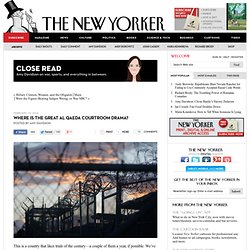 We’ve also, as politicians remind us, been convulsed as a nation by the September 11th attacks, which are supposed to have changed our expectations of everything from Presidents to airplane rides and privacy. The one thing that the memory of 9/11 hasn’t had the power to do, strangely, is get us engrossed in the actual judicial proceedings involving members of Al Qaeda. When it comes to bringing terrorists to justice in a courtroom, we seem to get bored. The military commission trying Abd al-Rahim al-Nashiri, accused of being behind Al Qaeda’s attack, in 2000, on the U.S.S. Cole, convened for hearings this week in Guantánamo Bay; only one reporter, Carol Rosenberg of the Miami Herald, made it down there.

What is odd is that the name “Al Qaeda” is still toxically stimulating—but only, it seems, when it is applied to Benghazi or to activity on the phone lines of Americans. Why is this? Of Course the Government Is Lying About 9-11. This month, a campaign in Canada is challenging the government’s 9-11 story. 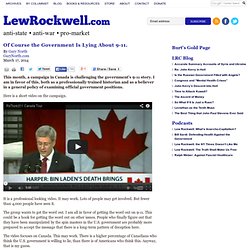 I am in favor of this, both as a professionally trained historian and as a believer in a general policy of examining official government positions. Here is a short video on the campaign. It is a professional looking video. It may work. Lots of people may get involved. 11 septembre. 911 and related wars. Post 9-11-2001 Police State. 911 & USA Saudi Relations. Assassinations & Conspiricy Theories. Iron Man (911 Whistleblower)