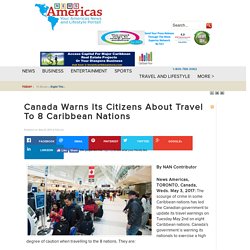 May 3, 2017: The scourge of crime in some Caribbean nations has led the Canadian government to update its travel warnings on Tuesday May 2nd on eight Caribbean nations. Canada’s government is warning its nationals to exercise a high degree of caution when travelling to the 8 nations. They are: The Bahamas The Canadian government urges nationals to exercise a high degree of caution at all times, when travelling to the Bahamas and to monitor local media and follow the instructions of local authorities. Belize Canadians are being warned to exercise a high degree of caution if travelling to Belize due to a high rate of violent crimes throughout the country. They also warned of armed robberies that occasionally occur near the western border with Guatemala, including near and around Caracol.

Bond-style luxury with a Jamaican vibe - Americas - Travel - The Independent. Chris Blackwell, the founder of Island Records and producer of some of the most influential popular music of the past half-century, gives me a wry smile. 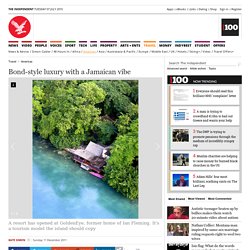 "I know," I say. "She's a bit more famous than me. " Blackwell is referring to the American photographer Kate Simon, whose images of the pop stars that he helped to create we now conjure up as default pictures of these famous faces in our mind's eye – not least of his most important discovery, Bob Marley. It's OK, my family are used to being the not-famous Simons – my brother Peter isn't the founder of the fashion store Monsoon; my brother David didn't write The Wire. So, while I may not be the Kate Simon he's used to seeing, Chris Blackwell fits my image of the multi-millionaire music mogul who has been a resident of the most laid-back country in the world for 74 years. 43_06caribbean-is-.pdf. The History of Jamaica - Captivated by Jamaica. Never had I seen a land so beautiful. 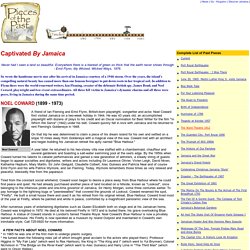 Everywhere there is a blanket of green so thick that the earth never shows through - Errol Flynn, My Wicked, Wicked Ways, 1976. So wrote the handsome movie star after his arrival in Jamaica courtesy of a 1946 storm. Over the years, the island's compelling natural beauty has caused more than one famous foreigner to put down roots in her tropical soil. Unusual Place Names in Jamaica. Jamaica’s Unusual Place Names Sometimes place names in Jamaica tell their own stories. 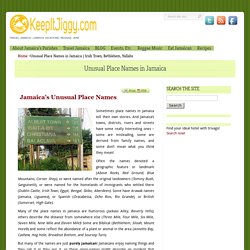 And Jamaica’s towns, districts, rivers and streets have some really interesting ones – some are misleading, some are derived from family names, and some don’t mean what you think they mean! Often the names denoted a geographic feature or landmark (Above Rocks, Red Ground, Blue Mountains, Corner Shop), or were named after the original landowners (Tommy Bush, Sanguinetti), or were named for the homelands of immigrants who settled there (Dublin Castle, Irish Town, Egypt, Bengal, Skibo, Aberdeen). Some have Arawak names (Jamaica, Liguanea), or Spanish (Oracabessa, Ocho Rios, Rio Grande), or British (Somerset, High Gate). Many of the place names in Jamaica are humorous (Jackass Alley, Beverly Hills); others describe the distance from somewhere else (Three Mile, Four Mile, Six Mile, Seven Mile, Nine Mile and Eleven Mile)!

UK census entries for people born in Jamaica. Caribbean Genealogy - Resources - Jamaica. Jamaica Family DNA. "No man can know where he is going unless he knows exactly where he has been and exactly how he arrived at his present place. 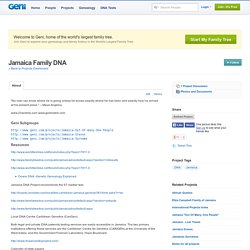 G. Dead men do tell tales. By Dwight Bellanfante Observer staff reporter Sunday, November 07, 2004 There was a time when the mere mention of the word 'cemetery' or graveyard would fill many with fear and trepidation; and there are still some who see them as being inhabited by spirits of the dead, or "duppies" as they are popularly called in Jamaica. 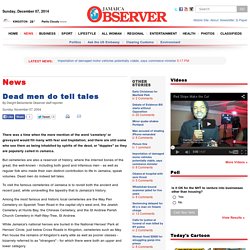 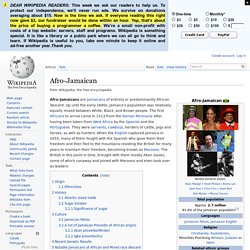 Up until the early 1690s, Jamaica's population was relatively equally mixed between White, Black, and Brown people. The first Africans to arrive came in 1513 from the Iberian Peninsula after having been taken from West Africa by the Spanish and the Portuguese. The National Library of Jamaica. Place Names in Jamaica Sometimes names are not what they seem. 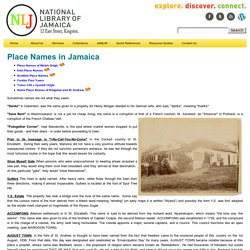 "Danks" in Clarendon, was the name given to a property Sir Henry Morgan deeded to his German wife, who said, "danke", meaning "thanks". "Save Rent" in Westmoreland, is not a pot for cheap living; the name is a corruption of that of a French colonist, M. Jamaican Surnames. Jamaicans Found Elsewhere. Jamaican Family Search Genealogy Research Library ADAMS, Sybil Maud Wright, died October 4, 2003 in British Columbia, Canada. 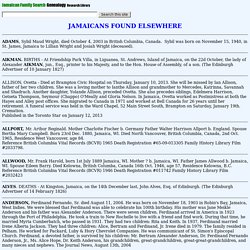 Sybil was born on November 15, 1940, in St. James, Jamaica to Lillian Wright and Josiah Wright (deceased). AIKMAN. Jamaica Graves. Jamaica Gleaner : Pieces of the Past: What's In A Name? Place-Names ­ A Window To Jamaica's History and Character What's In A Name ? 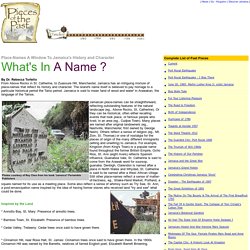 By Dr. Rebecca Tortello From Above Rocks in St. Unusual Place Names in Jamaica. Plan of this web site. I. The Samples Directory II. The Members Directory III. Images and photographs Each of these three Directories has its own General Lead Page. IV. Each Main Topic or Book on this site is also accessed through its own detailed Lead Page. The purpose of the pages in the Samples Directory is threefold: A. Show them "Where do I begin? " B. Instructions on how to read pages with "Families from Registers" are on the page Sample RegistersInstructions on how to read pages with Families from Wills are on the page Sample Will Report Instructions on how to read other pages is found in the body of the "Lead Page" on that topic. C. About 85% of the documents and pages on this site are in this Directory. Best Jamaica Luxury Hotel - Trident Villas in Port Antonio, Portland Caribbean.

Anthony Bourdain, No Reservations - Jamaica. Anthony Bourdain Parts Unknown & Seasoun 4 Episode 08 & Jamaica. In search of Errol Flynn's Jamaica. It is a blazing Jamaican afternoon, the sun bouncing off the pristine turquoise Caribbean sea, and I am looking for Errol Flynn. The man himself has been dead for 60 years, but here in Jamaica he is not forgotten.

The hard-drinking, hell-raising, skirt-chasing Hollywood heartthrob first came to the island in 1942 after the yacht he was sailing was caught up in a storm. Flynn docked his boat into Kingston before hopping on the back of a motorcycle and reaching Port Antonio. He fell in love with the place, famously declaring it "more beautiful than any woman I have ever known". Coming from Flynn this was high praise indeed, and that is why I have come to Jamaica – to follow in his footsteps and rediscover the Jamaica that was once the playground of the rich and the glamorous. I begin my trip in Ocho Rios, a two-hour drive from Montego Bay on the north coast of Jamaica. Navy Island is a sliver of land which, legend has it, Errol Flynn won in a game of poker. In search of Errol Flynn's Jamaica. Anthony Bourdain Parts Unknown & Seasoun 4 Episode 08 & Jamaica.