What Could Possibly Go Wrong?

A.I. - What Could Possibly Go Wrong? S.Robley INFO282. Stephen Hawking: "I Fear That AI May Replace Humans Altogether" The Point of No Return Stephen Hawking fears it may only be a matter of time before humanity is forced to flee Earth in search of a new home. 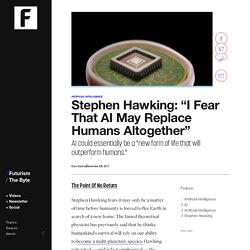 The famed theoretical physicist has previously said that he thinks humankind’s survival will rely on our ability to become a multi-planetary species. Hawking reiterated — and in fact emphasized — the point in a recent interview with WIRED in which he stated that humanity has reached “the point of no return.” Hawking said the necessity of finding a second planetary home for humans stems from both concerns over a growing population and the imminent threat posed by the development of artificial intelligence (AI). He warned that AI will soon become super intelligent — potentially enough so that it could replace humankind.

“The genie is out of the bottle. It certainly wasn’t the first time Hawking made such a dire warning. In both cases, it would seem, his warnings have been largely ignored. A New Life Form. Who's Right About AI? Musk's Dire Warnings Meet Zuckerberg's Cheerful Optimism. Over 87% of websites have medium to high security vulnerabilities Scan and audit your website for SQLi, XSS, and 4500+ additional vulnerabilities with Netsparker. 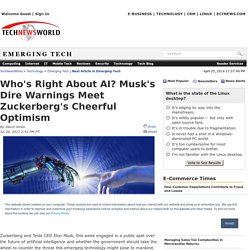 Eliminate false-positives with our Proof-Based Scanning™ technology. Learn more! Two of Silicon Valley's most influential visionaries, Facebook CEO Mark Zuckerberg and Tesla CEO Elon Musk, this week engaged in a public spat over the future of artificial intelligence and whether the government should take the wheel to counter the threat this emerging technology might pose to mankind.

Musk, a longtime advocate of AI, has expressed serious concerns over the years about the potential for the technology to accelerate faster than society can learn to manage its growth. Robot Apocalypse? "I keep sounding the alarm bell, but until people see robots going down the street killing people, they don't know how to react, because it seems so ethereal," Musk told attendees at the National Governors Association meeting last week.

Mirror Mirror. Can we build an artificial superintelligence that won't kill us? The Bulletin of Atomic Scientists. GM Exec: "We Are Approaching the End of the Automotive Era" Relinquishing the Driver’s Seat Saying that autonomous cars are slowly increasing in popularity is a bit of an understatement. 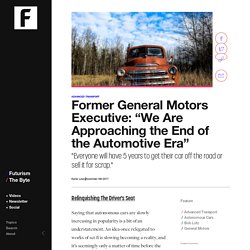 An idea once relegated to works of sci-fi is slowing becoming a reality, and it’s seemingly only a matter of time before the majority of vehicles on our streets and highways are self-driving and we reach the end of the automotive era as we know it. A glance at the companies investing in autonomous technologies should tell you everything you need to know about the tech’s expected impact — Tesla, Google, Lyft, Uber, General Motors, and Ford are just a handful of the many companies creating, testing, and deploying autonomous cars. Bob Lutz sees such a future on the horizon. The former VP of General Motors may have retired in 2010, but with 47 years’ worth of experience, few know the automotive industry as well as he does, so when he says we’re approaching the end of the automotive era, it’s in every automaker and car owner’s best interest to pay attention.

Rise of the Robots: Technology and the Threat of a Jobless Future by Martin Ford. The Age of Spiritual Machines: When Computers Exceed Human Intelligence by Ray Kurzweil. Smartbomb: The Quest for Art, Entertainment, and Big Bucks by Heather Chaplin. Aiva - 1hour music collection.