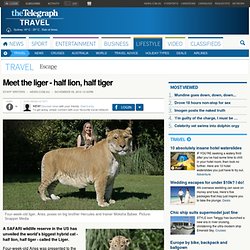 Picture: Snapper Media Cub Aries gets ahead of the pack. Picture: Snapper Media A SAFARI wildlife reserve in the US has unveiled the world's biggest hybrid cat - half lion, half tiger - called the Liger. Four-week-old Aries was presented to the world along with eight-year-old big brother, Hercules, at the Myrtle Beach Safari wildlife reserve in South Carolina. A cross between a male lion and a female tigress, the two posed for pictures with Aries resting on his sibling’s huge shoulders. Aries is expected to pile on 0.45kg per day and will be 165kg by his first birthday. The liger project has been created by The Institute of Greatly Endangered and Rare Species (T.I.G.E.R.S.). “Generally lions and tigers don’t reproduce and the male lion breeding with a tiger has only happened three times,” Dr Bhagavan Antle, the institute’s director, told the UK’s Mail Online. 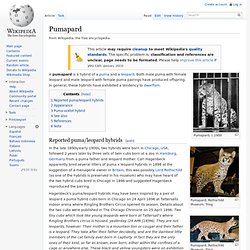 Both male puma with female leopard and male leopard with female puma pairings have produced offspring. In general, these hybrids have exhibited a tendency to dwarfism. Reported puma/leopard hybrids[edit] In the late 1890s/early 1900s, two hybrids were born in Chicago, USA, followed 2 years later by three sets of twin cubs born at a zoo in Hamburg, Germany from a puma father and leopard mother. Hagenbeck's puma/leopard hybrids may have been inspired by a pair of leopard x puma hybrid cubs born in Chicago on 24 April 1896 at Tattersalls indoor arena where Ringling Brothers Circus opened its season. A similar hybrid was reported by Helmut Hemmer. In The Field No 2887, April 25, 1908, Henry Scherren wrote "There was, and probably is now, in the Berlin Garden an Indian leopard and puma male hybrid, purchased of Carl Hagenbeck in 1898.

The hybrids were additionally reported by CJ Cornish et al. Liger Cub Makes Friends w/ Dolphins at Safari Park! How cute, this little liger cub actually makes some new best friends with 3 dolphins at the Safari park. Don’t they look cute together? Just imagine what they would make if they really became friends.. Ligerphins? Now that’s something I’d like to see! A liger cub enjoys an unlikely encounter with three dolphins in these amazing photos taken at a safari park.The six-week-old cat – the offspring of a male lion and a female tiger – and the trio of aquatic mammals were equally fascinated by each other.Nose to the glass at one point, the liger came face-to-face with the dolphins at Shenzhen Safari Park in Southern China, bordering Hong Kong.

Via: dailymail Be Sociable, Share! Cats 101: Bengal (Asian Leopard Cat + Domestic Shorthair) Lion hybrids. The lion (Panthera leo) is one of the four big cats in the genus Panthera and a member of the family Felidae. 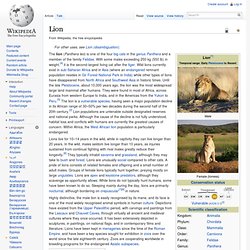 With some males exceeding 250 kg (550 lb) in weight,[4] it is the second-largest living cat after the tiger. Wild lions currently exist in sub-Saharan Africa and in Asia (where an endangered remnant population resides in Gir Forest National Park in India) while other types of lions have disappeared from North Africa and Southwest Asia in historic times. Until the late Pleistocene, about 10,000 years ago, the lion was the most widespread large land mammal after humans. They were found in most of Africa, across Eurasia from western Europe to India, and in the Americas from the Yukon to Peru.[5] The lion is a vulnerable species, having seen a major population decline in its African range of 30–50% per two decades during the second half of the 20th century.[2] Lion populations are untenable outside designated reserves and national parks.