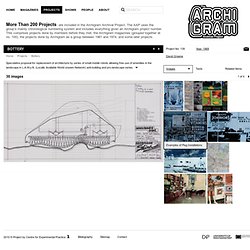 If you had a quiet chuckle over Electronic Tomato or Manzak then take a fast look under your bed or your better-than-real-leather Naugahyde chair and check that MOWBOT isn’t sleeping there, purring like some overloved kitten waiting to chew up your carpet when you go out the door. This is the mower that sleeps in the shed. Spiral Jetty 2007. New work by Stanza.

Spiral Jetty 2007 This work developed out of my research fellowship at goldsmiths in converstion with Janis Jefferies. 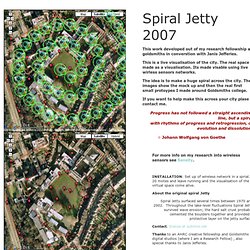 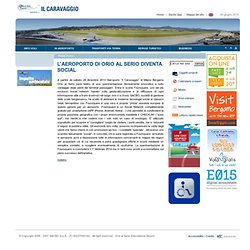 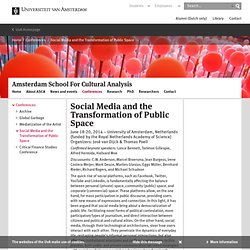 Public space: European Prize for Urban Public Space. Public space: European Prize for Urban Public Space. The Hub - Get Ready. Whats-an-infographic.jpg (799×1273) Collective (unsolicited) architectures. Locative Media as War. By Sophie Le-Phat Ho. A giant art installation project that targets predator drone operators sitting thousands of miles away who refer to kills as BugSplats. Now they’ll see a child’s face instead. Unbinding the Atlas: Working with Digital Maps. NYPL has now scanned nearly all of its public domain New York City atlases (a collection of now more than 10,000 maps, the wonderfully graphical title page at left is from a recently scanned Sanborn atlas of Staten Island) and built a web tool (blog post announcement) where users both inside and outside the Library can virtually stretch old maps onto a digital model of the world à la Google Maps or OpenStreetMap, thus creating a new copy that is not only aligned with spatial coordinates on the Earth, but normalized across the entire archive of old maps. 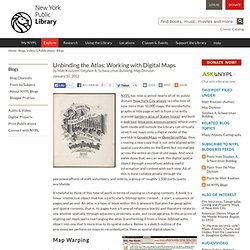 And once we’ve done that, we can walk this digital spatial object through a workflow, adding useful information and context with each step. Depth Maps Hidden in Google Street View Create Flickering Ghost-Cities. As We May Think: A 1945 Essay on Information Overload, “Curation,” and Open-Access Science. By Maria Popova “There is a new profession of trail blazers, those who find delight in the task of establishing useful trails through the enormous mass of the common record.” 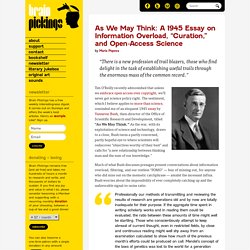 Tim O’Reilly recently admonished that unless we embrace open access over copyright, we’ll never get science policy right. How Twitter Proves That Place Matters - Richard Florida. Twitter is a fascinating place to explore not just the connectedness of people but of places. 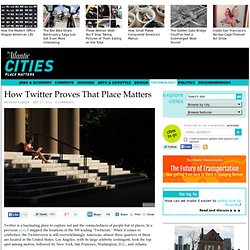 In a previous post, I mapped the locations of the 500 leading "Twitterati. " When it comes to celebrities, the Twitterverse is still overwhelmingly American: almost three quarters of them are located in the United States. Los Angeles, with its large celebrity contingent, took the top spot among metros, followed by New York, San Francisco, Washington, D.C., and Atlanta. The Skyscraper Museum: MANHATTAN TIMEFORMATIONS.

The Skyscraper Museum is devoted to the study of high-rise building, past, present, and future. 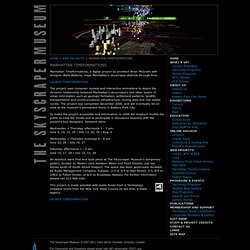 The Museum explores tall buildings as objects of design, products of technology, sites of construction, investments in real estate, and places of work and residence. This site will look better in a browser that supports web standards, but it is accessible to any browser or Internet device. Listening to the digital city. Il contado comasco: un'immagine significativa del riformismo "teresiano" - Maria Gabriella Martini. The Lingering Power of Geography Over How We Communicate - Emily Badger. "In the 1990s, this was a very popular suggestion," says Stanislav Sobolevsky, a researcher with MIT's Senseable City Lab. 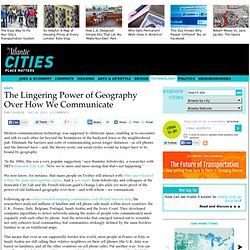 "Now we’re more and more seeing that that's not happening. " We now know, for instance, that many people on Twitter still interact with other users located within the same metropolitan region. And a new study from Sobolevsky and colleagues at the Senseable City Lab and the French telecom giant's Orange Labs adds yet more proof of the power of old-fashioned geography over how – and with whom – we communicate.

PLoS ONE 8(12): e81707. doi:10.1371/journal.pone.0081707 Editor: Yamir Moreno, University of Zaragoza, Spain Received: August 23, 2013; Accepted: October 25, 2013; Published: December 18, 2013 Copyright: © 2013 Sobolevsky et al. This is an open-access article distributed under the terms of the Creative Commons Attribution License, which permits unrestricted use, distribution, and reproduction in any medium, provided the original author and source are credited. Funding: Financial supporters of the Senseable City Laboratory are: the National Science Foundation, the MIT SMART program, the Center for Complex Engineering Systems (CCES) at KACST and MIT, AudiVolkswagen, BBVA, The Coca Cola Company, Ericsson, Expo 2015, Ferrovial and all the members of the MIT Senseable City Lab Consortium. 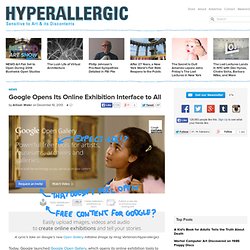 It’s currently invite only, which isn’t exactly “open” in our book, although you can peruse some initial launch examples to check out what an Open Gallery might look like for your project. Open Gallery is part of Google Cultural Institute’s Art Project, which has been collaborating with museums and galleries for online exhibitions like a digital exploration of the transformation of the Musée d’Orsay in Paris from train station to museum, and street art from the walls of São Paulo, Brazil.

Arthur Nieuwenhuijs’ work on Google Open Gallery (all screenshots by the author for Hyperallergic) Page for the “Nimbus Series” on Google Open Gallery Click here to view Google Open Gallery and apply for an invitation. MOOCs against poverty. 22 oktober 2013 - Already 40 percent of Coursera’s students are from developing countries, but the MOOC-giant takes it one step further and partners with The World Bank. Starting January 2014, they will offer coursers on development and poverty alleviation.

MOOCs are staggeringly popular, but the added value for higher education in developed countries is not yet clear for everyone involved. For many MOOCs are a new mean to make education more efficient, and above all, cheaper. The low completion rate doesn’t contribute to its popularity. Locative media. Mapping the Future of Locative Media - wfs2012. SAWE - Situated activities in working environments. ICT work is no longer tied to a specific location. With the increasing use of laptops and other mobile devices, work is being done not only at the office and at home, but more and more in public spaces and in vehicles.

The SAWE (Situated Activities in Working Environments) project was set up to explore work environments from a user-driven way. The objective was to develop new, customer-oriented business concepts that would meet the requirements of the changing nature of ICT work. UrbanIxD. What is the ‘knowledge turn’ and why does it matter? Over the past couple of years geography educators in the UK have become increasingly interested in some developments around the ‘sociology of knowledge’. In particular, they have taken up some of the recent writing of Michael Young, Emeritus Professor at the Institute of Education (London) and especially his 2008 book Bringing Knowledge Back In. Others have engaged with Young’s work, so my purpose here is to place the recent ‘knowledge turn’ in a slightly broader context, and raise some of my own concerns about this development.

Filosofia. On Why Struggles over Urban Space Matter: An Interview with David Harvey. Why do urban struggles matter in projects of social change? What is the importance of reclaiming public space in social movements? And at this gloomy global moment of extreme urban disparities and social inequalities, how do we re-think what is possible? For insights on these questions, we interviewed David Harvey on 24 October 2013. Harvey is the Distinguished Professor of Anthropology & Geography at the Graduate Center of the City University of New York (CUNY), Director of The Center for Place, Culture and Politics, and author of numerous groundbreaking books including Social Justice and the City (1973), The Limits to Capital (1982), Spaces of Hope (2000), A Brief History of Neoliberalism (2005), and Rebel Cities: From the Right to the City to the Urban Revolution (2012).

Sprint Spark - Today is already the future. The revolution will NOT be in Open Data.