Science & Evolution. Crepuscular rays. The name comes from their frequent occurrences during crepuscular hours (those around dawn and dusk), when the contrasts between light and dark are the most obvious. 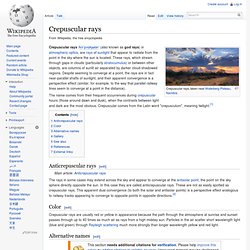 Crepuscular comes from the Latin word "crepusculum", meaning twilight.[1] Anticrepuscular rays[edit] The rays in some cases may extend across the sky and appear to converge at the antisolar point, the point on the sky sphere directly opposite the sun. In this case they are called anticrepuscular rays. Physicists create clouds of impenetrable gases that bounce off each other. When one cloud of gas meets another, they normally pass right through each other. 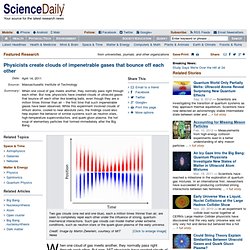 But now, MIT physicists have created clouds of ultracold gases that bounce off each other like bowling balls, even though they are a million times thinner than air -- the first time that such impenetrable gases have been observed. While this experiment involved clouds of lithium atoms, cooled to near absolute zero, the findings could also help explain the behavior of similar systems such as neutron stars, high-temperature superconductors, and quark-gluon plasma, the hot soup of elementary particles that formed immediately after the Big Bang.

A paper describing the work will appear in the April 14 issue of Nature. The researchers, led by MIT assistant professor of physics Martin Zwierlein, carried out their experiment with an isotope of lithium that belongs to a class of particles called fermions. All building blocks of matter -- electrons, protons, neutrons and quarks -- are fermions. Lights and flat-panel displays: Researchers 'brighten' the future of organic light-emitting diode technology. Chlorine is an abundant and readily available halogen gas commonly associated with the sanitation of swimming pools and drinking water. 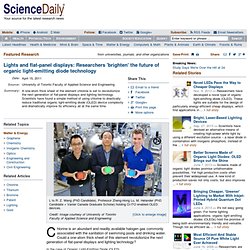 Could a one-atom thick sheet of this element revolutionize the next generation of flat-panel displays and lighting technology? In the case of Organic Light-Emitting Diode (OLED) devices, it most certainly can. Primary researchers Michael G. Helander (PhD Candidate and Vanier Canada Graduate Scholar), Zhibin Wang (PhD Candidate), and led by Professor Zheng-Hong Lu of the Department of Materials Science & Engineering at the University of Toronto, have found a simple method of using chlorine to drastically reduce traditional OLED device complexity and dramatically improve its efficiency all at the same time. Solar power without solar cells: A hidden magnetic effect of light could make it possible. A dramatic and surprising magnetic effect of light discovered by University of Michigan researchers could lead to solar power without traditional semiconductor-based solar cells. 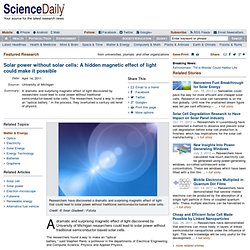 The researchers found a way to make an "optical battery," said Stephen Rand, a professor in the departments of Electrical Engineering and Computer Science, Physics and Applied Physics. In the process, they overturned a century-old tenet of physics. "You could stare at the equations of motion all day and you will not see this possibility. We've all been taught that this doesn't happen," said Rand, an author of a paper on the work published in the Journal of Applied Physics.

"It's a very odd interaction. Light has electric and magnetic components. "This could lead to a new kind of solar cell without semiconductors and without absorption to produce charge separation," Rand said. "It turns out that the magnetic field starts curving the electrons into a C-shape and they move forward a little each time," Fisher said. This Geoid Is The Most Sophisticated Map Of Earth's Gravity Yet. Since 2009 the European Space Agency's Gravity field and steady-state Ocean Circulation Explorer (GOCE) has been mapping the Earth's gravitational field, and today the agency released its most detailed model of the geoid to date. 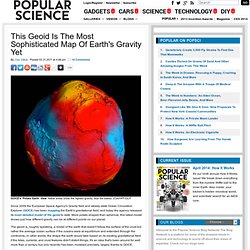 More potato-shaped than spherical, this latest model shows just how different gravity can be at different points on our planet. Earth Has an Orbital Companion Stuck in a Horseshoe-Shaped Orbit Around the Sun. Near-Earth asteroids aren't all that rare, but today two researchers at Armagh Observatory in Northern Ireland say they've found an extremely rare near-Earth object in an orbit very similar to Earth's. 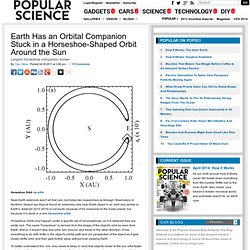 Asteroid 2010 SO16 is not exotic because of it's closeness to the home planet, but because it is stuck in a rare horseshoe orbit. Horseshoe orbits only happen under a specific set of circumstances, so it is believed they are pretty rare. The name "horseshoe" is derived from the shape of the object's orbit as seen from Earth--that is, it doesn't stop mid-orbit, turn around, and travel in the other direction. It has everything to do with shifts in the object's orbital path and our perspective of the object as it gets closer, shifts orbit, and then gets further away without ever passing Earth. To better understand this, one only needs to keep in mind that objects closer to the sun orbit faster and objects further away orbit more slowly. Clouds of 'Impenetrable Gas' Bounce Off Each Other Like Solids. Gases, as we all know, don't generally offer a lot of resistance. 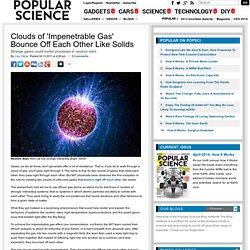 That is, if you try to walk through a cloud of gas, you'll pass right through it. The same is true for two clouds of gases that meet each other: they pass right through each other. But MIT physicists have observed the first exception to the rule by creating two clouds of ultra-cold gases that bounce right off each other like solids. The researchers had set out to use lithium gas atoms as stand-ins for electrons in models of strongly interacting systems--that is, systems in which atomic particles are likely to collide with each other.