Solidoodle 4: Testing the home 3-D printer. Image by Juliana Jiménez Jaramillo We keep hearing that 3-D printing is the future. 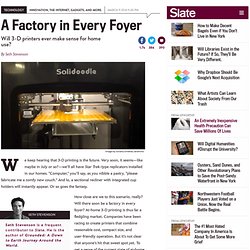 Very soon, it seems—like maybe in July or so? —we’ll all have Star Trek–type replicators installed in our homes. “Computer,” you’ll say, as you nibble a pastry, “please fabricate me a comfy new couch.” And lo, a sectional recliner with integrated cup holders will instantly appear. Follow How close are we to this scenario, really? When the Solidoodle 4—retailing for $1,000, and vaguely resembling an obese microwave—arrived at the Slate offices, I eagerly unpacked it in my cubicle. But the moment I attempted to print my first object, I realized that this device isn’t really designed for the average, moderately tech-savvy consumer. This last function made me acutely aware that a powerful machine was perched upon my desk.

Within moments, an extremely helpful fellow named Joel was on the line, walking me through the setup process. Photo by Juliana Jiménez Jaramillo OK, a less than total success. UCB CED CADCAM Labs. In order to use the 3D Printers, an orientation with Chris K. 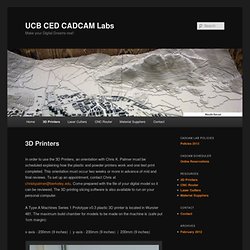 Palmer must be scheduled explaining how the plastic and powder printers work and one test print completed. This orientation must occur two weeks or more in advance of mid and final reviews. To set up an appointment, contact Chris at chriskpalmer@berkeley.edu. Come prepared with the file of your digital model so it can be reviewed. The 3D printing slicing software is also available to run on your personal computer. Structure Sensor Offers 3D Scanning For iPad. 3D Printers: 50 Things You Can Make. Why You'll Want A 3D Printer In Your Home. When it comes to 3D printing, there are two types of people. 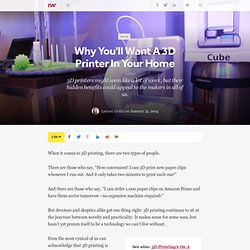 There are those who say, “How convenient! I can 3D print new paper clips whenever I run out. And it only takes two minutes to print each one!” And there are those who say, “I can order 1,000 paper clips on Amazon Prime and have them arrive tomorrow—no expensive machine required.” But devotees and skeptics alike get one thing right: 3D printing continues to sit at the juncture between novelty and practicality. 30 things being 3D printed right now (and none of them are guns)

As a technology journalist – even one who hasn't written much about 3D printing – I've noticed a big growth in questions from friends about the area in recent months. 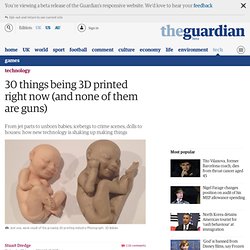 Often, those questions are the same ones, too. How does 3D printing even work? What's all this about 3D-printed guns? Can you 3D-print a 3D printer? Why are they so expensive? The ethical and legal questions around 3D printing and firearms are important and complex, but they also tend to hoover up a lot of the mainstream media attention for this area of technology. There's a growing community – from individual makers to nascent businesses – exploring the potential of 3D printing. A taste of what's happening, but one that's ripe for your comments pointing out better examples in these categories, and other areas that have been left out. 1.

Early this year, BAE Systems said that British fighter jets had flown with the first time with components made using 3D printing technology. 2. 20 Amazing Creations You Can Make With 3D Printing. If you can print in 2D, can you print in 3D? 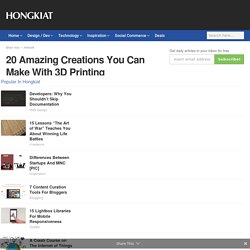 Well, the technology is already here. You can print out 3-dimensional objects based on a working template, and they aren’t just for show. They actually work! What is 3D Printing? An Overview. You’ve heard of 3D printing from newscasters and journalists, astonished at what they’ve witnessed. 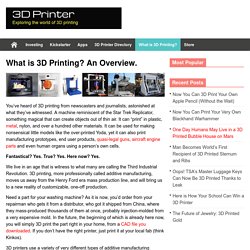 A machine reminiscent of the Star Trek Replicator, something magical that can create objects out of thin air. It can “print” in plastic, metal, nylon, and over a hundred other materials. It can be used for making nonsensical little models like the over-printed Yoda, yet it can also print manufacturing prototypes, end user products, quasi-legal guns, aircraft engine parts and even human organs using a person’s own cells. Fantastical? Yes. We live in an age that is witness to what many are calling the Third Industrial Revolution. 3D printing, more professionally called additive manufacturing, moves us away from the Henry Ford era mass production line, and will bring us to a new reality of customizable, one-off production.

Need a part for your washing machine? Each of these printed layers is a thinly-sliced, horizontal cross-section of the eventual object. An Insider’s View of the Myths and Truths of the 3-D Printing ‘Phenomenon’ A 3-D printed table … with holes and all. 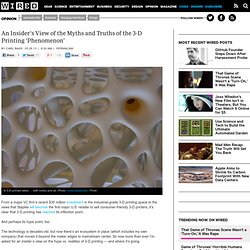 Photo: rosemarybeetle / Flickr From a major VC firm’s recent $30 million investment in the industrial-grade 3-D printing space to the news that Staples will become the first major U.S. retailer to sell consumer-friendly 3-D printers, it’s clear that 3-D printing has reached its inflection point. And perhaps its hype point, too. The technology is decades old, but now there’s an ecosystem in place (which includes my own company) that moves it beyond the maker edges to mainstream center.

37 Marketplaces to Share, Buy and Sell Designs for 3D Printing.