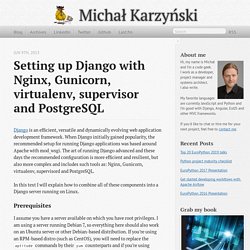 When Django initially gained popularity, the recommended setup for running Django applications was based around Apache with mod_wsgi. The art of running Django advanced and these days the recommended configuration is more efficient and resilient, but also more complex and includes such tools as: Nginx, Gunicorn, virtualenv, supervisord and PostgreSQL. In this text I will explain how to combine all of these components into a Django server running on Linux. Setting up an asynchronous task queue for Django using Celery and Redis - Michał Karzyński. Celery is a powerful, production-ready asynchronous job queue, which allows you to run time-consuming Python functions in the background. 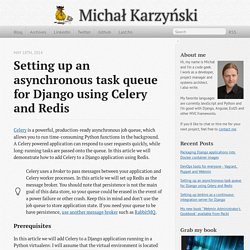 A Celery powered application can respond to user requests quickly, while long-running tasks are passed onto the queue. Setting up Django with Nginx, Gunicorn, virtualenv, supervisor and PostgreSQL - Michał Karzyński. Setting up an asynchronous task queue for Django using Celery and Redis - Michał Karzyński. Deploy Django on Apache with Virtualenv and mod_wsgi. I have recently got into Django and built a small project with it which is this blog. 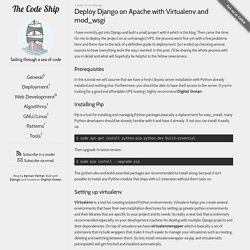 Then came the time for me to deploy the project on an unmanaged VPS, the process went fine yet with a few problems here and there due to the lack of a definitive guide to deployment. So I ended up checking several sources to have everything work the way I wanted. In this post, I'll be sharing the whole process with you in detail and what will hopefully be helpful to the fellow newcomers. Alex Raichev > Blog > Adding Celery with RabbitMQ to a Django project on Webfaction. I recently added Celery with RabbitMQ to one of my Django projects on Webfaction. 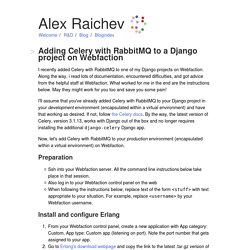 Along the way, i read lots of documentation, encountered difficulties, and got advice from the helpful staff at Webfaction. What worked for me in the end are the instructions below. Encoders and Decoders - Base64, URL, IDN, CP, UU, XML, Bin-Hex. C# - TripleDes class decryption issue. Fsck - How to repair a corrupted FAT32 file system. Simple OCR in Visual Basic 6. Install Windows 7 from a USB drive the very easy way - Bootable USB.

The fastest way to install windows 7 is from a bootable usb drive. 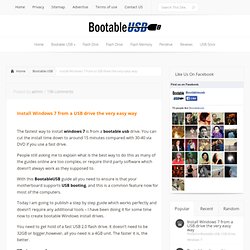 You can cut the install time down to around 15 minutes compared with 30-40 via DVD if you use a fast drive. People still asking me to explain what is the best way to do this as many of the guides online are too complex, or require third party software which doesn’t always work as they supposed to. With this BootableUSB guide all you need to ensure is that your motherboard supports USB booting, and this is a common feature now for most of the computers. Today I am going to publish a step by step guide which works perfectly and doesn’t require any additional tools – I have been doing it for some time now to create bootable Windows install drives. You need to get hold of a fast USB 2.0 flash drive. Creando un servicio web a partir de su interfaz WSDL. Installing PyGraphviz on Windows. Django Extensions provides a bunch of management commands for the Django Framework. 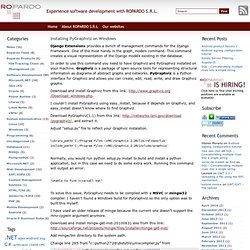 One of the most handy is the graph_models command. This command creates a visual representation of the Django models existing in the database. Python - error: Unable to find vcvarsall.bat. ResponsiveT Blogger template. Activa tu Windows 7 y hazlo genuino (Tutorial Paso a Paso) Uploading a single file. Command-line Options. Parameters Parameters for winscp.exe executable: 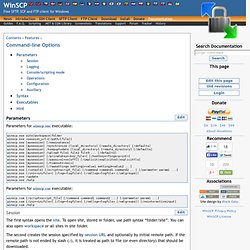 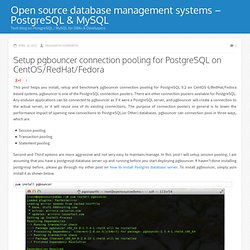 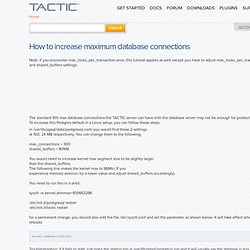 To increase this Postgres default in a Linux setup, you can follow these steps: in /var/lib/pgsql/data/postgresql.conf, you would find these 2 settings at 100, 24 MB respectively. Windows 8.1 login and black screen. MailServer. Introduction Setting up an email server is a difficult process involving a number of different programs, each of which needs to be properly configured. 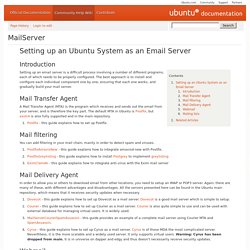 The best approach is to install and configure each individual component one by one, ensuring that each one works, and gradually build your mail server. Mail Transfer Agent A Mail Transfer Agent (MTA) is the program which receives and sends out the email from your server, and is therefore the key part. The default MTA in Ubuntu is Postfix, but exim4 is also fully supported and in the main repository. SaaS Business Models. I presented the following set of slides to the Mass TLC group as the keynote for the “SaaS Business Model Update — Creating and Managing Revenues” event. The slides should be useful for anyone interested in learning about the key drivers for a SaaS business, including the SaaS cash flow trough, cost of customer acquisition, churn, lifetime value of the customer, etc.

The slides also looks in detail at what drives growth. The greatest value from this slide deck will come if you download the model and try inputting your own variables. The Excel Spreadsheet and associated PowerPoint file can be downloaded by clicking here. Online Code Difference Comparison Tool. Python - error: Unable to find vcvarsall.bat. Install Python, Pip and Virtualenv on Windows – Zignar.net. Installing Python on Windows isn't rocket science. Here are 3 easy steps to get a complete Python environment on a Windows machine. Virtualenv 1.10. Introduction virtualenv is a tool to create isolated Python environments. The basic problem being addressed is one of dependencies and versions, and indirectly permissions.

How to Back Up and Restore a MySQL Database. If you're storing anything in MySQL databases that you do not want to lose, it is very important to make regular backups of your data to protect it from loss. This tutorial will show you two easy ways to backup and restore the data in your MySQL database. Installing mod_wsgi on Ubuntu 12.04. About mod_wsgi mod_wsgi is a simple and easy to setup tool that serves python web apps from Apache server.