Connecting the Radio to your Arduino. The NRF24L01+ transceiver from Nordic Semiconductors communicates with the Arduino board via the SPI interface. 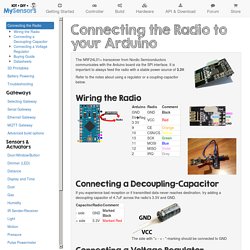 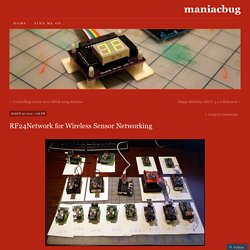 It’s goal is to have an alternative to Xbee radios for communication between Arduino units. It provides a host address space and message routing for up to 6,000 nodes. The layer forms the background of a capable and scalable Wireless Sensor Network system. At the same time, it makes communication between even two nodes very simple. Today, I managed to get 17 nodes running on a single network. Hardware The fastest way to get RF24Network-compatible hardware is to build the Getting Started board, or the ProtoShield board as explained in other posts, attached to commercially-available Arduino.

Dirt Cheap Low Power Wireless Sensor Node using nRF24L01+ 2.4GHz. I have mentioned before, that I have purchased couple nRF24L01+ units from eBay for the stunning $3 with delivery included. 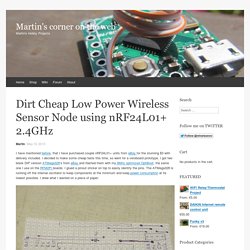 I decided to make some cheap tests this time, so went for a veroboard prototype. I got two blank DIP version ATMega328‘s from eBay and flashed them with my 8Mhz optimized OptiBoot, the same one I use on the RFM2Pi boards. Internet-connected home energy monitor. You'll need the following major components: The Particle Core (a.k.a. 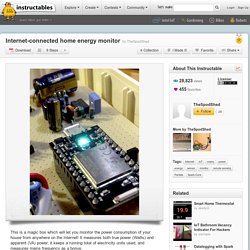 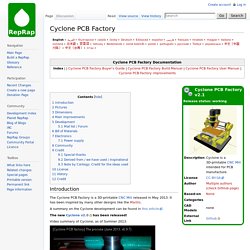 Recovering 433MHz Messages with RTL-SDR and MATLAB. Introduction I recently bought a DVB-T dongle containing the Realtek RTL2832U and Raphael Micro R820T chips with the intent to use it as a Software-Defined Radio (SDR) receiver. 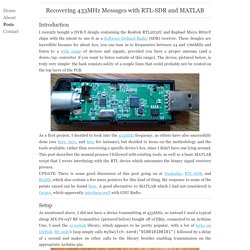 These dongles are incredible because for about $10, you can tune in to frequencies between 24 and 1766MHz and listen to a wide range of devices and signals, provided you have a proper antenna (and a down-/up- converter if you want to listen outside of this range). The device, pictured below, is truly very simple: the back consists solely of a couple lines that could probably not be routed on the top layer of the PCB. As a first project, I decided to look into the 433MHz frequency, as others have also successfully done (see here, here, and here for instance), but decided to focus on the methodology and the tools available, rather than recovering a specific device's key, since I didn't have one lying around. 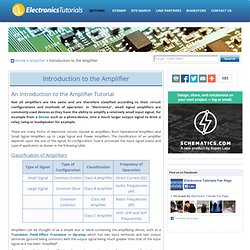 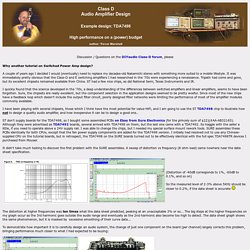 A couple of years ago I decided I would (eventually) need to replace my decades-old Nakamichi stereo with something more suited to a mobile lifestyle. It was immediately pretty obvious that the Class-D and E switching amplifiers I had researched in the '70s were experiencing a renaissance. Tripath had come and gone, but its excellent chipsets remained available from China. ST had a few nice chips, as did National Semi, Texas Instruments and IR. I quickly found that the science developed in the '70s, a deep understanding of the differences between switched amplifiers and linear amplifiers, seems to have been forgotten. 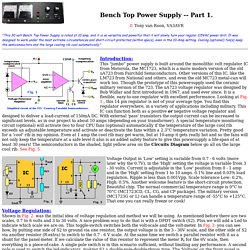 It was designed to work under the most extreme circumstances and short-circuit protected (within specs), even in the 10-Amp setting. Cooling (optional) fan(s) keep the semiconductors and the large cooling rib cool automatically. " Introduction: This "jumbo" power supply is built around the monolithic volt regulator IC from Motorola, the MC1723, which is a more modern version of the old uA723 from Fairchild Semiconductors. Voltage Output in 'Low' setting is variable from 0.7 - 6 volts (more later why the 0.7V), in the 'High' setting the voltage is variable from 3 - 30 volts. Voltage Regulation: Shown in Fig. 2. was the initial idea of voltage regulation and method we will be using. Audio Spectrum Monitor. This is an evaluation use of a small graphics LCD module. 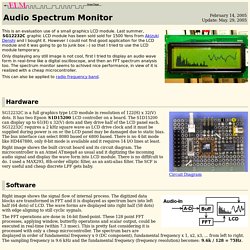 Interesting Parts. Lab5.pdf. Tantalum Capacitor » Capacitor Guide. What are tantalum capacitors? Tantalum capacitors are a subtype of electrolytic capacitors. They are made of tantalum metal which acts as an anode, covered by a layer of oxide which acts as the dielectric, surrounded by a conductive cathode. The use of tantalum allows for a very thin dielectric layer. This results in a higher capacitance value per volume, superior frequency characteristics compared to many other types of capacitors and excellent stability over time. Tantalum capacitors are generally polarized, which means that they may only be connected to a DC supply observing the correct terminal polarity.

Discrete_Flat_No-leads_DFN_package_poster. Discretes_package_poster. Ongoing Projects. A guide to SeeedStudio’s Fusion PCB Service. Among the many online services for PCB manufacturing, I was impressed by the SeeedStudio‘s offering: they aggregate many orders to offer professional service at a very competitive price. I tried out the service ordering 10 PCBs, maximum size 5x5cm, with a price of 9.90$ + 3.52$ for shipping (to Italy) – less then 10 euro. SeeedStudio doesn’t accept Eagle .brd files, so I thought to write this short guide with some hints to use Fusion PCB at its best. Download from Fusion PCB webpage, the Eagle Design Rule file. The downloaded archive, in Fusion eagle subfolder, contains two files: GPS. Cellular. RFID. Switching regulator - Open Circuits. A "voltage regulator" is designed to hold a constant output voltage. A "switching voltage regulator", usually called a switching regulator, also called a DC to DC converter, accomplishes this goal by rapidly switching a transistor from full on and full off.

Solid, field-tested software. STN1110 runs the same proven code that powers the popular OBDLink family of PC-based OBD interfaces. Small Stuff. SMD Adapters SOT23 to DIP adapter: One day these will be handy when playing with tiny I2C DAC chips such as the MCP4716. SOT89-5 to DIP adapter:

Guide. At present it's possible to sense: AC Electricity (apparent power, current, voltage, real power, power factor), Temperature, Humidity, Pulses (from pulse output utility meters), Elster IrDA (direct utility meter interface) and Solar PV power diversion. We and others are working on extending this list to include moisture, CO2 and other air quality measurements. See the links on the right for application specific guides. Partlist. Wi-Fi Controlled LED Candle / Light Show. This project is a wireless full-color electronic candle. Several of these devices can be placed around a room and controlled with a Wi-Fi capable computer to create special effects or music-synchronized light shows.

The entire hardware and software design is offered free and open-source. The hardware relies on a RN-XV Wi-Fi module to provide wireless network connectivity.