Embracing Technology: Getting to Know Twitter Download. A Simple Guide to Using Hashtags on Twitter [Infographic] Twitter for Teachers, a resource. Published on April 5th, 2015 | by Mark Anderson I was reminded last week on the power of Twitter which brought together 250 education professionals to London for #TMLondon. 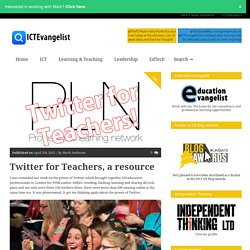 Selfies, trending, hashtag, learning and sharing all took place and not only were there 250 teachers there, there were more than 200 viewing online at the same time too. It was phenomenal. It got me thinking again about the power of Twitter. At the same time, I’ve come across another brilliant iPad app by the long-standing graphic and media software giant Adobe called, Adobe Slate. New To Twitter Tips #2: Organizing Your Twitter Stream By Listing! Many teachers are still finding out about the benefits of Twitter for 24-7 Pro-D and resources. 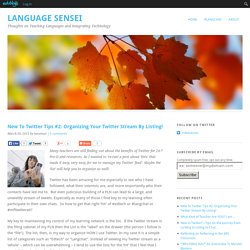 So I wanted to ‘re-run’ a post about ‘lists’ that made it easy, very easy, for me to manage my Twitter ‘feed’. Maybe the ‘list’ will help you to organize as well! Twitter has been amazing for me especially to see who I have followed, what their interests are, and more importantly who their contacts have led me to. But even judicious building of a PLN can lead to a large, and unwieldy stream of tweets. 15 Twitter Hacks That Will Turn You Into a Twitter Ninja. Admit it. 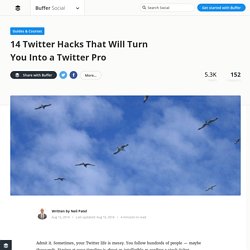 Sometimes, your Twitter life is messy. You follow hundreds of people — maybe thousands. Staring at your timeline is about as intelligible as reading a stock ticker. How to Search Twitter for Educational Content. Using Hashtags and Twitter Chats in the Classroom [2533] A Great Resource Sheet on How to Grow Your PLN on Twitter. 10 Steps to Creating the Perfect Educational Twitter Account. As a globally connected educator, I LOVE connecting, networking and engaging with my PLN (Personal/Professional Learning Network) on a daily basis through Twitter. 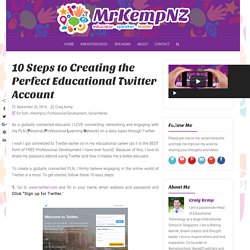 I wish I got connected to Twitter earlier on in my educational career (as it is the BEST form of FREE Professional Development I have ever found). Because of this, I love to share my passions behind using Twitter and how it makes me a better educator. To create a globally connected PLN, I firmly believe engaging in the online world of Twitter is a must. To get started, follow these 10 easy steps: 1. 2. 3. 4. 5. 6. Resource: An A-Z of Twitter for Educators. Using Twitter in the classroom - my firsthand experience. 10 tips for Tweeting Teachers by. After several years of tweeting, it’s about time I published my own Tips for Tweeting Teachers. 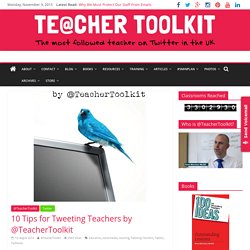 A Must Have Guide on Using Twitter in your Classroom. 90+ Twitter Tools Teachers Should Know about. Twitter is the topical theme of my MAED thesis and I have been assembling and compiling several resources and academic papers on this topic. 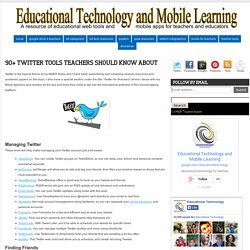 I also have a special section under the title "Twitter for Teachers" where I share with my fellow teachers and readers all the tips and tools they need to tap into the educational potential of this microblogging platform. The Twitteraholic’s Ultimate Guide to tweets, hashtags, and all things Twitter. Most educators who learn to use Twitter effectively say they learn more from their personal learning network (PLN) on Twitter than they’ve achieved from any other forms of professional development or personal learning. 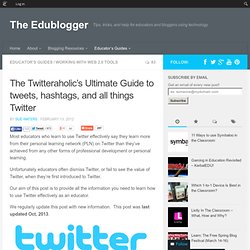 Unfortunately educators often dismiss Twitter, or fail to see the value of Twitter, when they’re first introduced to Twitter. Our aim of this post is to provide all the information you need to learn how to use Twitter effectively as an educator. We regularly update this post with new information. This post was last updated Oct, 2013. Icelandic educator, iPad 1:1 classroom, speaker & entrepreneur.

Do you have Twitter manners? No? Then this guide is for you. i4s_twitter1.png (1024×768) Twiducate - Social Networking & Media For Schools. Rossieronline.usc.edu/wp-content/uploads/2012/07/twitter-for-teachers.pdf. A Great Resource Sheet on How to Grow Your PLN on Twitter. A Refreshingly Simple Guide To Twitter For Teachers.

Teachers are on Twitter every minute of every day. 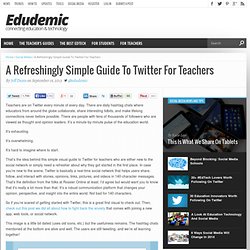 There are daily hashtag chats where educators from around the globe collaborate, share interesting tidbits, and make lifelong connections never before possible. There are people with tens of thousands of followers who are viewed as thought and opinion leaders. It’s a minute-by-minute pulse of the education world. It’s exhausting. It’s overwhelming. Education, learning & technology. EdTech Published on September 9th, 2013 | by Mark Anderson 11inShare Many is the blog post which highlights the ways in which Twitter is the best staffroom in the world but I’ve not seen too many that highlight the ways in which we can use Twitter in the classroom. 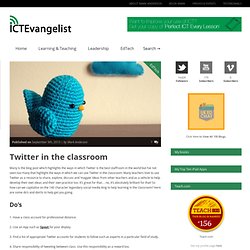 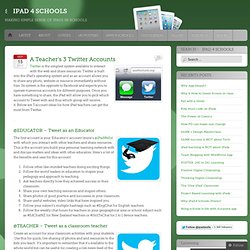 Below are 3 account ideas for how iPad teachers can get the most from Twitter. iPad Edu Tweeting. Education, learning & technology. How To Create A Twitter List - A Step By Step Guide! By now, you already know that Twitter is a great tool for teachers . Not only can you use it in your classroom to keep your students and their parents informed of what’s going on, you can also use it in class for projects and homework, and you can use it for your own professional development and PLN .

Recently, we heard from a teacher who uses Twitter Lists to help manage her PLN and keep her sane when she’s trying to find the resources she needs. Safety tips for parents. How (And Why) To Try Twitter Teams In School. Twitter can give a school district’s constituents—parents, community members, students and teachers—a real-time peek into the working lives of administrators and teachers and into the amazing projects students are working on daily.

It is an instantaneous platform for communicating what reading material you find interesting, which teachers are doing innovative things in classrooms, displays of school spirit and of technology integration, showcases of community service and more. According to Washington Post columnist Michael S. Rosenwald, who featured Montgomery County (Maryland) schools chief and principals engaged on Twitter in a 2011 story, “Twitter is an interesting technological outlet for administrators, allowing them an unfiltered way to communicate insights into how they manage, what makes them tick and what tactics might be useful to adapt elsewhere.”

Twitter: a step-by-step guide to getting started. If the recent buzz around Twitter, the micro-blogging platform, has aroused your curiosity you may be wondering how to get started. Twitter is not a publishing platform, as I said yesterday, so you can’t simply go to the site and read it. Well, you can but that’s not really the point. The Beginner’s Guide to Twitter. Using Twitter for Professional Development. The term “professional development” conjures up thoughts of travel, conference fees, arranging substitutes, and loss of precious instructional time. But does it have to entail all that?

Actually, no. A growing number of educators are using Twitter—yes, the microblogging platform Twitter—as a quick, easy, low-cost alternative. Over 100 ideas for using Twitter in the Classroom. This handful of resources provide about 100 different ideas for, and examples of, using Twitter in the classroom. It’s been almost 8 months since I published the post, “6 Examples of Using Twitter in the Classroom”, about uses of the popular micro-blogging tool in the instructional setting. This post generated a lot of traffic, and continues to attract hundreds of viewers every week. Since that brief posting, I’ve come across a lot of articles containing examples and suggestions for using Twitter in instructional applications. I’ve combed through many of these and tried to boil down the redundancies to create a rich set of idea-laden resources.

While there’s still going to be some overlap in the concepts presented in these articles, they clearly meet the goal of providing a thorough set of ideas and examples for leveraging Twitter in the educational process. Here are the original “6 Examples” from last June’s post: About Kelly Walsh. The Complete Guide To Twitter Hashtags For Education. What is a hashtag? The Ultimate Guide To Using Twitter In Education. Twitterforeducation - Educational Uses of Twitter. Twitter as a Powerful Educational Tool. Think Twitter is just a waste of time? Think again. Its organizational structure makes it an effective tool for connecting with students and others online. On Feb. 10th 2011, the world was transfixed on the protests raging in Egypt.

We all watched as thousands gathered in Tahir square, where they had been for the past several weeks, to listen to a speech by President Hosni Mubarak. Many figured this would be his resignation speech. What Mubarak might not have known is that while he was trying to maintain his iron grip on power, thousands of Egyptians were tweeting about their frustration with the dictator. Through our previous articles, we have introduced you to three pillars we believe are essential to be Web literate. 10 Amazing Ways For Teachers & Tutors To Use Twitter In Education.

Related:  Cybercriminalité   -  TWITTER   -  Twitter for Administrators   -  robgeog   -  15 Twitter Hacks That Will Turn You Into a Twitter Ninja   -  Resource: An A-Z of Twitter for Educators   -  10 tips for Tweeting Teachers by   -  A Must Have Guide on Using Twitter in your Classroom   -  90+ Twitter Tools Teachers Should Know about   -  The Twitteraholic’s Ultimate Guide to tweets, hashtags, and all things Twitter   -  Twiducate - Social Networking & Media For Schools   -  Rossieronline.usc.edu/wp-content/uploads/2012/07/twitter-for-teachers.pdf   -  A Refreshingly Simple Guide To Twitter For Teachers   -  A Teacher’s 3 Twitter Accounts   -  Safety tips for parents   -  The Beginner’s Guide to Twitter   -  Using Twitter for Professional Development   -  Over 100 ideas for using Twitter in the Classroom   -  The Complete Guide To Twitter Hashtags For Education   -  Tweepsmap - Deep Twitter Analytics and Publishing   -  Infographic: Social Media Statistics For 2012 | Digital Buzz Blog   -  Technology News & Computers, Mobile, Internet and Trends in Innovation - Wsj.com   -  Twitter for Teachers   -  Tweeting For Schools | The Principal of Change   -  Tweet Archivist - Simple Powerful Affordable Twitter Analytics   -  Twitterfountain - The fountain is back...   -  Twitter in Education – Barriers and possible solutions? | Learning and Innovation   -  Tweet Archivist Desktop   -  Bootstrap Magic : Generate your own bootstrap theme quickly and easily   -  Using Twitter for Teachers' Professional Development ~ Educational Technology and Mobile Learning   -  10 outils pour optimiser son compte Twitter : Faire le ménage dans ses abonnements avec ManageFlitter - JDN Web & Tech   -  The Formulists | Formulists finds and analyzes groups of tweeps for you so that you can engage and target them more effectively.   -  7 Powerful Facebook Statistics You Should Know for a More Engaging Facebook Page - The Buffer Blog   -  How Teachers Can Stop Being Scared Of Twitter | Edudemic   -  A Scientific Guide to Posting Tweets, Facebook Posts, Emails, and Blog Posts at the Best Time - The Buffer Blog   -  5 Ways Twitter Can Help in Education - Getting Smart by Guest Author - edchat, social media, twitter   -  The Beginner's Guide to the Hashtag   -  Andrew Fitzgerald: Adventures in Twitter fiction | Video on TED.com   -  TweetDeck   -  Education   -  Enterprise