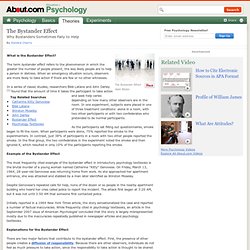 The term bystander effect refers to the phenomenon in which the greater the number of people present, the less likely people are to help a person in distress. When an emergency situation occurs, observers are more likely to take action if there are few or no other witnesses. In a series of classic studies, researchers Bibb Latane and John Darley (1) found that the amount of time it takes the participant to take action and seek help varies depending on how many other observers are in the room. In one experiment, subjects were placed in one of three treatment conditions: alone in a room, with two other participants or with two confederates who pretended to be normal participants.

Guest Post: The psychology of anthropomorphism, or why I felt empathy towards a piece of trash. In early January, the sidewalks in my neighborhood are lined with discarded Christmas trees. 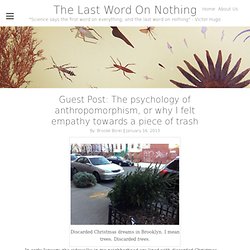 It’s the collective holiday hangover trash, and quite frankly it makes me sad; the trees mark the moment of winter where all that is left are several cheerless months of cold and drudgery. My dog, however, goes apeshit over them. He loves to sniff them. He loves to pee on them. And, a couple of weeks ago, his Christmas tree habit led me to some unexpected psychological self-analysis. Social loafing. Social loafing can be explained by the "free-rider" theory and the resulting "sucker effect", which is an individual’s reduction in effort in order to avoid pulling the weight of a fellow group member.[3][4] Research on social loafing began with rope pulling experiments by Ringelmann, who found that members of a group tended to exert less effort into pulling a rope than did individuals alone. 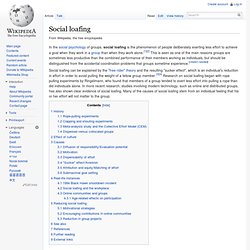 In more recent research, studies involving modern technology, such as online and distributed groups, has also shown clear evidence of social loafing. Teleological argument. The teleological or physico-theological argument, also known as the argument from design, or intelligent design argument is an argument for the existence of God or, more generally, for an intelligent creator based on perceived evidence of deliberate design in the natural world.[1][2][3] The earliest recorded versions of this argument are associated with Socrates in ancient Greece, although it has been argued that he was taking up an older argument.[4][5] Plato, his student, and Aristotle, Plato's student, developed complex approaches to the proposal that the cosmos has an intelligent cause, but it was the Stoics who, under their influence, "developed the battery of creationist arguments broadly known under the label 'The Argument from Design'".[6] From its beginning, there have been numerous criticisms of the different versions of the teleological argument, and responses to its challenge to the claims against non-teleological natural science. 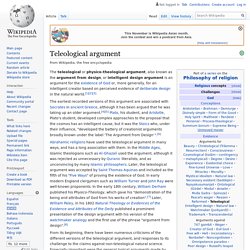 History[edit] Classical philosophy[edit] A. Teleology. Philosophical study of nature by attempting to describe things in terms of their apparent purpose, directive principle, or goal Though ancient atomists rejected the notion of natural teleology, teleological accounts of non-personal or non-human nature were explored and often endorsed in ancient and medieval philosophies, but fell into disfavor during the modern era (1600–1900). 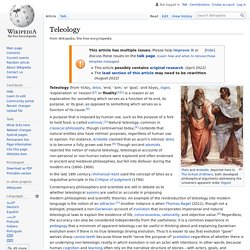 In the late 18th century, Immanuel Kant used the concept of telos as a regulative principle in his Critique of Judgment. Teleology was also fundamental to the philosophy of G. W. F. Contemporary philosophers and scientists are still discussing whether teleological axioms are useful or accurate in proposing modern philosophies and scientific theories. Credulity. Indomitable. Women Are Kind And Men Are Strong: How Benevolent Sexism Hurts Us All. Opinion: How World War I gave us 'cooties' French soldiers sing the national anthem at the beginning of World War I in August 1914. 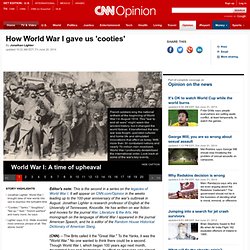 This "war to end all wars" might seem like ancient history, but it changed the world forever. It transformed the way war was fought, upended cultures and home life and stimulated innovations that affect us today. With more than 30 combatant nations and nearly 70 million men mobilized, World War I profoundly destabilized the international order. Biocentric universe. Biocentric universe (from Greek: βίος, bios, "life")—also known as biocentrism—is a concept proposed in 2007 by American doctor of medicine Robert Lanza, a scientist in the fields of regenerative medicine and biology,[1][2][3] which sees biology as the central driving science in the universe, and an understanding of the other sciences as reliant on a deeper understanding of biology. 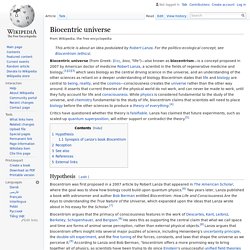 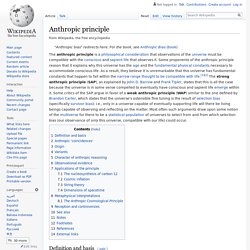 Some proponents of the anthropic principle reason that it explains why this universe has the age and the fundamental physical constants necessary to accommodate conscious life. As a result, they believe it is unremarkable that this universe has fundamental constants that happen to fall within the narrow range thought to be compatible with life.[1][2] The strong anthropic principle (SAP), as explained by John D. Barrow and Frank Tipler, states that this is all the case because the universe is in some sense compelled to eventually have conscious and sapient life emerge within it. Definition and basis[edit] Anthropic 'coincidences'[edit] Origin[edit] Execrate. Death anxiety (psychology) Death anxiety is the morbid, abnormal or persistent fear of one's own death or the process of his/her dying. 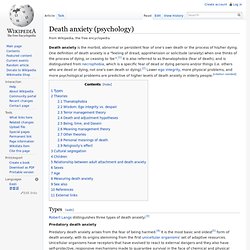 One definition of death anxiety is a "feeling of dread, apprehension or solicitude (anxiety) when one thinks of the process of dying, or ceasing to ‘be’".[1] It is also referred to as thanatophobia (fear of death), and is distinguished from necrophobia, which is a specific fear of dead or dying persons and/or things (i.e. others who are dead or dying, not one's own death or dying).[2] Lower ego integrity, more physical problems, and more psychological problems are predictive of higher levels of death anxiety in elderly people. 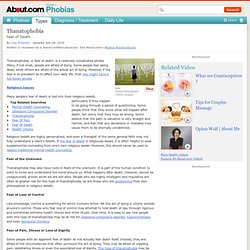 Many, if not most, people are afraid of dying. Some people fear being dead, while others are afraid of the actual act of dying. However, if the fear is so prevalent as to affect your daily life, then you might have a full-blown phobia. Religious Issues Many people's fear of death is tied into their religious beliefs, particularly if they happen to be going through a period of questioning.

Religious beliefs are highly personalized, and even a therapist of the same general faith may not fully understand a client's beliefs. Creation and Mathematics; or What Does God Have to do with the Numbers? By Vern S. Poythress [Published in The Journal of Christian Reconstruction 1/1 (1974) 128 - 140.

Used with permission.] What does the Bible say about mathematics? Flotsam and jetsam. In maritime law, flotsam, jetsam, lagan and derelict are specific kinds of shipwreck. How cold is a witch's tit? Fusiform. Fusiform means having a spindle-like shape that is wide in the middle and tapers at both ends. Tidal locking. Tidal locking results in the Moon rotating about its axis in about the same time it takes to orbit Earth. Except for libration effects, this results in the Moon keeping the same face turned towards Earth, as seen in the figure on the left. (The Moon is shown in polar view, and is not drawn to scale.) If the Moon were not spinning at all, it would alternately show its near and far sides to Earth, while moving around Earth in orbit, as shown in the figure on the right.

Mechanism[edit] The change in rotation rate necessary to tidally lock a body B to a larger body A is caused by the torque applied by A's gravity on bulges it has induced on B by tidal forces. Tidal bulges[edit] A's gravity produces a tidal force on B that distorts its gravitational equilibrium shape slightly so that it becomes elongated along the axis oriented toward A, and conversely, is slightly reduced in dimension in directions perpendicular to this axis. Witches' mark. According to witch-hunters during the height of the witch trials, the witches’ mark (not to be confused with a witches' teat) indicated that an individual was a witch. The witches' mark and the devil's mark are all terms applied to essentially the same mark.

The beliefs about the mark differ depending on the trial location and the accusation made against the witch. Evidence of the witches’ mark is found earliest in the 16th century, and reached its peak in 1645, then essentially disappeared by 1700.[1] The Witch or Devil's mark was believed to be the permanent marking of the Devil on his initiates to seal their obedience and service to him. He created the mark by raking his claw across their flesh, or by making a blue or red brand using a hot iron. Tia Silverthorne Bach's Blog - Colder Than A Witch's Tit &amp; Other Sayings - September 13, 2013 10:30.