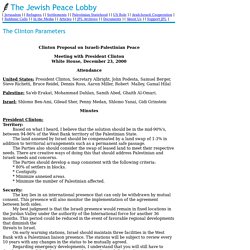 Israel: Shlomo Ben-Ami, Gilead Sher, Penny Medan, Shlomo Yanai, Gidi Grinstein Minutes President Clinton: Territory: Based on what I heard, I believe that the solution should be in the mid-90%'s, between 94-96% of the West Bank territory of the Palestinian State. Security: The key lies in an international presence that can only be withdrawn by mutual consent. Jerusalem and Refugees: I have a sense that the remaining gaps have more to do with formulations than practical realities. Jerusalem: The general principle is that Arab areas are Palestinian and Jewish ones are Israeli. Building a Jewish and Democratic State: A Conversation with Peter Beinart. The Urgency of a Two-State Solution: J Street. The outlines of an agreement are by now well-known and widely accepted: Borders based on the 1967 lines with agreed reciprocal land swaps allowing Israeli incorporation of a majority of settlers, as well as Palestinian viability and contiguity; a sharing of Jerusalem that is based on demographic realities establishing the capitals of the two states and allowing freedom of access and respect for all holy sites; robust security arrangements; and an agreed upon resolution of the refugee issue that resettles refugees outside of Israel. 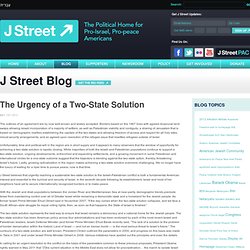 Unfortunately, time and political-will in the region are in short supply and it appears to many observers that the window of opportunity for achieving a two-state solution is rapidly closing. J Street believes that urgently reaching a sustainable two-state solution to the Israeli-Palestinian conflict is both a fundamental American interest and essential to the survival and security of Israel. Watch More. "Land Swaps" and the 1967 Lines. When President Barack Obama first made his controversial reference to the 1967 lines as the basis for future Israeli-Palestinian negotiations on May 19, 2011, he introduced one main caveat that stuck out: the idea that there would be “mutually agreed swaps” of land between the two sides. 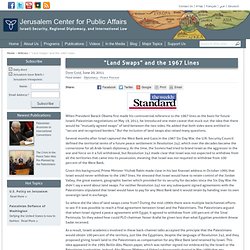 He added that both sides were entitled to “secure and recognized borders.” But the inclusion of land swaps also raised many questions. Several months after Israel captured the West Bank and Gaza in the 1967 Six Day War, the U.N. Security Council defined the territorial terms of a future peace settlement in Resolution 242, which over the decades became the cornerstone for all Arab-Israeli diplomacy. Given this background, Prime Minister Yitzhak Rabin made clear in his last Knesset address in October 1995 that Israel would never withdraw to the 1967 lines. So where did the idea of land swaps come from? There is a huge difference between Egypt and the Palestinians. What to Do With the Israeli Settlements in the West Bank. The Clinton Parameters. The Clinton Parameters (Hebrew: מתווה קלינטון‎, Mitveh Clinton, lit. 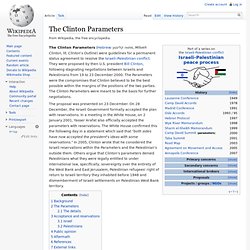 Clinton's Outline) were guidelines for a permanent status agreement to resolve the Israeli–Palestinian conflict. They were proposed by then U.S. president Bill Clinton, following stagnating negotiations between Israelis and Palestinians from 19 to 23 December 2000. Carter Center History and Intervention Is Pal. Geneva Initiative - Yes to an agreement - Home Page. An Inclusive Peace Process for the Israeli-Palestinian Conflict.

The exclusion of women and civil society groups1 from formal Track I negotiations is a defining feature of the failed peace process in the Israeli- Palestinian conflict. 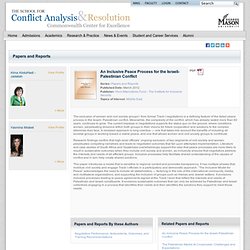 Meanwhile, the complexity of the conflict, which has already lasted more than 60 years, continues to grow. The current impasse in negotiations supports the status quo on the ground, where conditions worsen, perpetuating divisions within both groups in their visions for future cooperation and solutions to the complex dilemmas they face. A renewed approach is long overdue — one that takes into account the benefits of including all societal groups in working toward a viable peace, and one that allows women and civil society groups to contribute. Research findings confirm that high-level officials’ ongoing exclusion of key segments of civil society and women perpetuates competing narratives and leads to negotiated outcomes that fail upon attempted implementation. Prospects for a Two-State Solution. Future Vision of Pal Arabs In Is.