Women in Science throughout History. Top 10 Things That Women Invented" It was just supposed to be a temporary job. 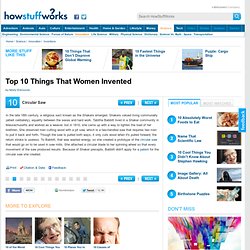 Stephanie Kwolek took a position at DuPont in 1946 so she could save enough money to go to medical school. In 1964, she was still there, researching how to turn polymers into extra strong synthetic fibers. Kwolek was working with polymers that had rod-like molecules that all lined up in one direction. Pussyharvest: jesuswithalacefront: ... Happy Birthday to Inge Lehmann, the Woman Who Discovered Earth's Inner Core. Annie Jump Cannon: Theorist of Star Spectra. Nonsingular key, This is Henrietta Leavitt.  Never heard of her? ... Wednesday Geek Woman: E. Lucy Braun, ecologist and expert on deciduous forests. This is a guest post byÂ Jacquelyn Gill, a PhD candidate at the University of Wisconsin, where I research climate change, ecology, and biogeography at the end of the last ice age in order to help address future global change concerns. 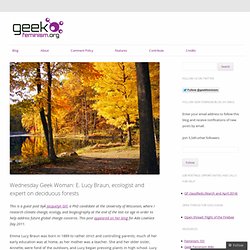 This post appeared on her blog for Ada Lovelace Day 2011. Emma Lucy Braun was born in 1889 to rather strict and controlling parents; much of her early education was at home, as her mother was a teacher. Stunning Victorian Cyanotypes of Sea Algae by Anna Atkins, the First Female Photographer and a Pioneer of Scientific Illustration. By Maria Popova Beautiful blueness from a trailblazing woman in science. 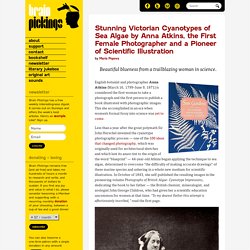 English botanist and photographer Anna Atkins (March 16, 1799–June 9, 1871) is considered the first woman to take a photograph and the first person to publish a book illustrated with photographic images. This she accomplished in an era when women’s formal foray into science was yet to come. Less than a year after the great polymath Sir John Herschel invented the cyanotype photographic process — one of the 100 ideas that changed photography, which was originally used for architectural sketches and which lent its azure tint to the origin of the word “blueprint” — 44-year-old Atkins began applying the technique to sea algae, determined to overcome “the difficulty of making accurate drawings” of these marine species and ushering in a whole new medium for scientific illustration.

Over the decade that followed, Atkins produced and self-published three volumes of these simple yet strangely beautiful algae illustrations. Gone in 2013: A Tribute to 10 Remarkable Women in Science. Pioneering scientists and engineers are often overlooked in popular retrospectives commemorating the year’s departed. 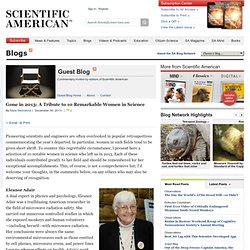 In particular, women in such fields tend to be given short shrift. To counter this regrettable circumstance, I present here a selection of 10 notable women in science who left us in 2013. Each of these individuals contributed greatly to her field and should be remembered for her exceptional accomplishments. 6 Women Scientists Who Were Snubbed Due to Sexism. In April, National Geographic News published a story about the letter in which scientist Francis Crick described DNA to his 12-year-old son.

In 1962, Crick was awarded a Nobel Prize for discovering the structure of DNA, along with fellow scientists James Watson and Maurice Wilkins. Several people posted comments about our story that noted one name was missing from the Nobel roster: Rosalind Franklin, a British biophysicist who also studied DNA. Her data were critical to Crick and Watson's work. But it turns out that Franklin would not have been eligible for the prize—she had passed away four years before Watson, Crick, and Wilkins received the prize, and the Nobel is never awarded posthumously. Doing Science While Female. 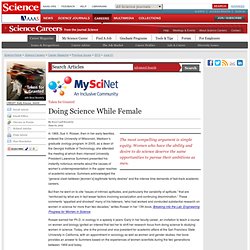 Rosser, then in her early twenties, entered the University of Wisconsin, Madison’s graduate zoology program. In 2005, as a dean of the Georgia Institute of Technology, she attended the meeting at which then–Harvard University President Lawrence Summers presented his instantly notorious remarks about the causes of women’s underrepresentation in the upper reaches of academic science. Summers acknowledged the “general clash between [women’s] legitimate family desires” and the intense time demands of fast-track academic careers. But then he went on to cite “issues of intrinsic aptitudes, and particularly the variability of aptitude,” that are “reinforced by what are in fact lesser factors involving socialization and continuing discrimination.” Rosser earned her Ph.D. in zoology in a speedy 4 years. This article is part of a Science Careers special issue on Women in Science. Rosser was married by the time she entered graduate school. 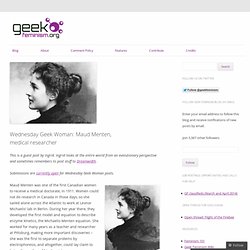 Ingrid looks at the entire world from an evolutionary perspective and sometimes remembers to post stuff to Dreamwidth. Submissions are currently open for Wednesday Geek Woman posts. Wednesday Geek Woman: Branca Edmée Marques, Portuguese scientist, and collaborator with Marie Curie. This is a guest post by Jennifer. 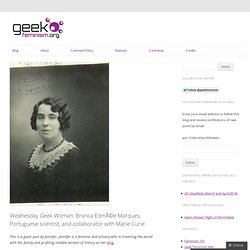 Jennifer is a feminist and actuary who is travelling the world with her family and profiling notable women of history on her blog. This entry is cross-posted from Jennifer’s blog. Submissions are currently open for Wednesday Geek Woman posts. Scientist Rosalind Franklin made the first clear... GE Pinterest Katharine Burr Blodgett Pat Leary. By Rebecca Pahle | 11:28 am, August 12th, 2013 This is Katharine Burr Blodgett, the first woman to get a PhD in physics from Cambridge in addition to being the first woman scientist to join the GE Research Laboratory. 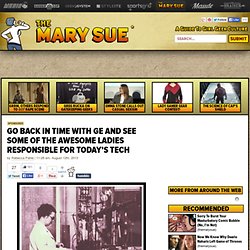 Wednesday Geek Woman: Frances Oldham Kelsey, FDA reviewer of thalidomide. In the absence of doctors’ records, it can never be known how many babies died in the U.S. because of thalidomide’s “clinical trials”; Dr. 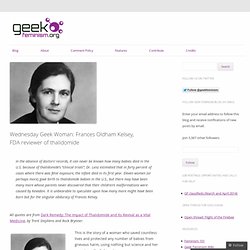 Lenz estimated that in forty percent of cases where there was fetal exposure, the infant died in its first year. Eleven women (or perhaps more) gave birth to thalidomide babies in the U.S., but there may have been many more whose parents never discovered that their children’s malformations were caused by Kevadon. Rita Levi Montalcini.

By Susana Polo | 11:43 am, December 31st, 2012 Yesterday, at the age of 103, Rita Levi-Montalcini died the longest lived Nobel Prize Winner in history, the tenth woman to be elected to the U.S. National Academy of Sciences, the co-discoverer of nerve growth factor, and a woman who refused to let her father’s ideas about gender or a state’s ideas about race keep her from doing some pretty great science. Levi-Montalcini was born the youngest (along with her twin sister) child of an Italian-Jewish family in 1909. She entered university at the age of twenty, because that was how long it took her to convince her father that one of his daughters could seek an education that would prepare her for things other than marriage and motherhood.

The Mysterious Case of the Vanishing Genius. Evolution's It Girl: In 1993, Margie Profet received a MacArthur "Genius" grant tor her work in Evolutionary Biology. She was 34. Margie Profet was always a study in sharp contradictions. 5 Trowelblazers You Should Have Heard Of. It’s just been Women’s History Month, and now we have International Womens’ Day. The internet is full of fabulous lists of women in science who should be better known. Wednesday Geek Woman: Annette Laming-Emperaire, archaeologist. Submissions are currently open for Wednesday Geek Woman posts. Born in 1917, Annette Laming-Emperaire was a graduate student at the Sorbonne when she began to study Paleolithic cave paintings (like this one from Lascaux.) Although during her life her brilliance was always apparent, her great originality seems to have burst into being like a fire. La significationÂ turned out to be that most rare beast, a graduate thesis that changed an entire discipline. The Women Who Would Have Been Sally Ride - Alexis Madrigal.

The truth is: the sexism of the day overwhelmed the science of the day. Science, Technology, Engineering, Mathematics (+more!). Frances Dunkle Coffin Thanks to Deb Hirsch, who pointed out this super post on blogs.nasa.gov about Frances Dunkle Coffin, along with the pic above and this quote: Forget Wonder Woman: These Women Nerds Are Our Real Superheroes. As 2012 comes to a close, we’d like to take this opportunity look back at the past for inspiration. In the Bay Area, we’re lucky enough to be surrounded by brilliant people doing amazing things. Ada Lovelace. Augusta Ada King, Countess of Lovelace (10 December 1815 – 27 November 1852), born Augusta Ada Byron and now commonly known as Ada Lovelace, was an English mathematician and writer chiefly known for her work on Charles Babbage's early mechanical general-purpose computer, the Analytical Engine.

Her notes on the engine include what is recognised as the first algorithm intended to be carried out by a machine. Because of this, she is often described as the world's first computer programmer.[1][2][3] Grace Murray Hopper: Pioneer Computer Scientist. Born: New York, New York, December 9, 1906. Computer Programming Used To Be Women’s Work. Today, the computer programming field is dominated by men. Normalizing Female Computer Programmers in the ’60s.

By Gwen Sharp, PhD, Jul 28, 2011, at 10:52 am Today, the field of computer science is heavily male-dominated — men earn the vast majority of undergraduate and Ph.D. degrees in the field. AT&T Archives : First There Was Sarah. Emmy Noether, the Most Significant Mathematician You’ve Never Heard Of. Virne Beatrice “Jackie” Mitchell Gilbert (Aug... Swing and a Miss. When World War II came to America, baseball was one of the early victims. Many Major League players were in their early 20s and, therefore, subject to the draft. Ted Williams, for example, missed three seasons — 1943 to 1945 — due to military service. Then commissioner Kenesaw Mountain Landis wrote to President Franklin Delano Roosevelt to ask if the league should suspend operations altogether; FDR wrote a famous letter (here) giving the league the “green light” to continue playing. Alice E. Kober, 43 - Lost to History No More. I RESCUE lost souls.