A Look At Post-Traumatic Stress Disorder During Combat

A HISTORY OF POST TRAUMATIC STRESS DISORDER. In 1980, the American Psychiatric Association added PTSD to the third edition of its Diagnostic and Statistical Manual of Mental Disorders (DSM-III) nosologic classification scheme. 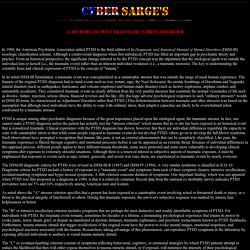 Although a controversial diagnosis when first introduced, PTSD has filled an important gap in psychiatric theory and practice. From an historical perspective, the significant change ushered in by the PTSD concept was the stipulation that the etiological agent was outside the individual him or herself (i.e., the traumatic event) rather than an inherent individual weakness (i.e., a traumatic neurosis). PTSD in ancient times - new evidence - Historum - History Forums. PTSD is not something a person would ordinarily experience during a battle but afterwards. 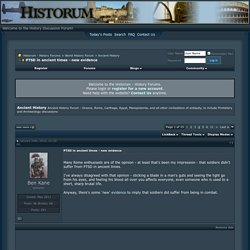 Battle fatigue or some other things linked with violence during battles lead to spontaneous blindness etc which if it heals afterward would definitely not be classified as PTSD. Just the presence of blood and violence does not cause psychic trauma on the level associated with later breakdowns otherwise butchers, hunters, paramedics, etc would be having a lot of issues.

Most often PTSD is associated with long term stress and the threat of sudden unanticipated violence. Modern battle where artillery, air strikes, snipers, IED, etc can threaten over months of deployment causes a different long term stress than a trauma victim in car accident or assault. Home invasions or assaults which last more than a few hours also can lead to similar feelings in victims. Mental illness and war through history. 490 B.C: A soldier goes blind "without blow of sword" A marble sculpture from 420 B.C. depicts a battle between Greek and Persian soldiers, possibly the Battle of Marathon. 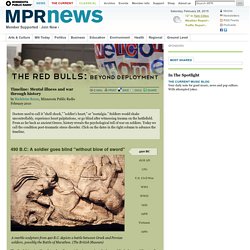 (The British Museum) The Greek historian Herodotus describes an Athenian warrior who became blind when a soldier standing next to him was killed during the Battle of Marathon in 490 B.C. Did Civil War Soldiers Have PTSD? Shades Of Gray. The PTSD Trap – Extras (sources, links, a bit of multimedia) – Neuron Culture. Below are materials supplementing my story “The Post-Traumatic Stress Trap,” Scientific American, April 2009. 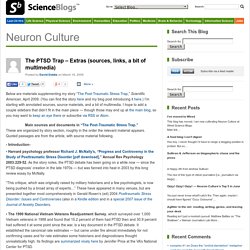 (You can find the story here and my blog post introducing it here.) I’m starting with annotated sources, source materials, and a bit of multimedia. I hope to add a couple sidebars that didn’t fit in the main piece — though those may end up at the main blog, so you may want to keep an eye there or subscribe via RSS or Atom. These are organized by story section, roughly in the order the relevant material appears. Quoted passages are from the article, with source material following. - Introduction- • Harvard psychology professor Richard J. . • The 1990 National Vietnam Veterans Readjustment Survey, which surveyed over 1,000 Vietnam veterans in 1988 and found that 15.2 percent of them had PTSD then and 30.9 percent had suffered it at some point since the war, is a key document in the PTSD debate. 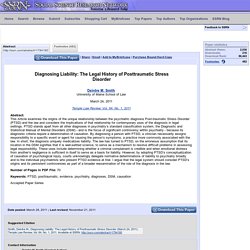 Lacking Moral Fiber: The Difficult History Of Post-Traumatic Stress Disorder In The Military. From "Irritable Heart" to "Shellshock": How Post-Traumatic Stress Became a Disease. PTSD: Not A New Ailment On 'Wartorn' Battlefield. Interview: What is PTSD Really? Surprises, Twists of History, and the Politics of Diagnosis and Treatment - Kolk - 2013 - Journal of Clinical Psychology. 'The Evil Hours': Author's deep, personal take on post-traumatic stress. Patton was so disgusted by what he perceived as cowardice that he berated and slapped the soldier. 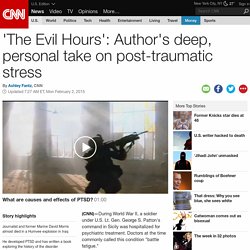 For that -- and an almost identical incident a few days later -- Patton received his own kind of professional slap from Congress and Gen. Minneapolis VA studies invisible scars from combat. The two soldiers followed standard rules of engagement as a suspicious truck rolled toward their convoy in Iraq. 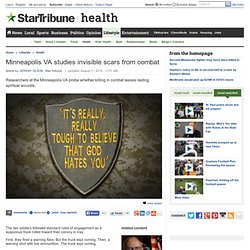 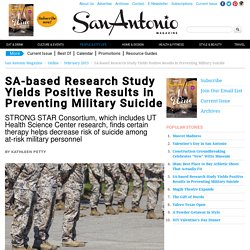 A research initiative conducted as part of the San Antonio-based STRONG STAR Consortium (South Texas Research Organizational Network Guiding Studies on Trauma and Resilience) showed that military personnel who completed short-term cognitive behavioral therapy were 60 percent less likely to attempt suicide in the two years following treatment than their military counterparts who went through traditional therapy. Cost of caring for Afghanistan, Iraq veterans extends beyond federal government to states - DecodeDC Story. WASHINGTON, D.C. - The federal government has spent $4.4 trillion fighting the wars in Iraq and Afghanistan, and is expected to ... 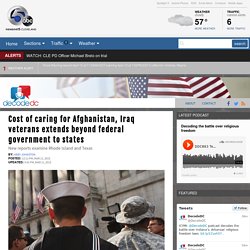