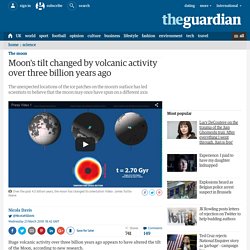 Scientists concluded that the celestial body may have once spun on a different axis after studying its north and south poles, and finding that lunar ice was deposited in unexpected locations. “The discovery of ice on the poles of the moon was probably one of the most significant discoveries in lunar science ever,” says Dr Ian Garrick-Bethell from the University of California, who was not involved in the study. “This goes one step further.” The researchers concluded that the moon’s axis of rotation is now 5.5 degrees different from what it once was as a result of volcanic activity, which stemmed from a region of hot rock lurking deep beneath its surface. Future - Interactive: How we built the International Space Station. Hurricane Sandy ‘s Silver Lining, A National Geographic Video. Fire island, NY. 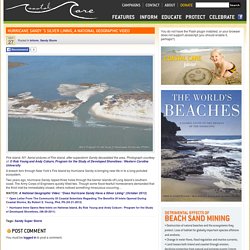 Aerial pictures of Fire island, after superstorm Sandy devastated the area. Photograph courtesy of: © Rob Young and Andy Coburn, Program for the Study of Developed Shorelines / Western Carolina University A breach torn through New York’s Fire Island by Hurricane Sandy is bringing new life in to a long-polluted ecosystem. Two years ago, Hurricane Sandy ripped three holes through the barrier islands off Long Island’s southern coast. The Army Corps of Engineers quickly filled two. WATCH: A National Geographic Video: “Does Hurricane Sandy Have a Silver Lining” (October 2013) Open Letter From The Community Of Coastal Scientists Regarding The Benefits Of Inlets Opened During Coastal Storms, By Robert S. 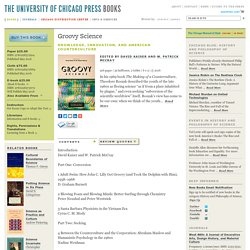 i5K Pilot Project Summary. About the Project The BCM-HGSC is sequencing 28 arthropod genomes as a pilot project to kickstart the i5K. 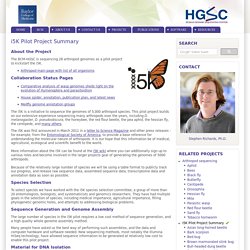 Arthropod main page with list of all organisms Collaboration Status Pages The i5K is a initiative to sequence the genomes of 5,000 arthropod species. This pilot project builds on our extensive experience sequencing many arthropods over the years, including D. melanogaster, D. pseudoobscura, the honeybee, the red flour beetle, the pea aphid, the hessian fly, the centipede, and many others. The i5K was first announced in March 2011 in a letter to Science Magazine and other press releases - for example, from the Entomological Society of America, to provide a base reference for understanding the molecular nature of arthropods. More information about the i5K can be found at the i5K wiki where you can additionally sign up to various roles and become involved in the larger projects goal of generating the genomes of 5000 arthropods.

Species Selection Sequence Generation and Genome Assembly. The Dancing Bees: Karl von Frisch and the Discovery of the Honeybee Language, Munz. History Within: The Science, Culture, and Politics of Bones, Organisms, and Molecules, Sommer. Acknowledgments Introduction Part I. 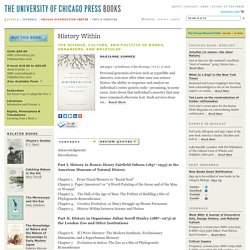 History in Bones: Henry Fairfield Osborn (1857–1935) at the American Museum of Natural History Chapter 1. From Visual Memory to “Racial Soul” Chapter 2. Paper Ancestors? Part II. Chapter 6. Part III. Chapter 11. Postscript Notes References Index Nadia Abu El-Haj, Barnard College, Columbia University “With History Within, Sommer sets out to understand the role of the life sciences over the twentieth and early twenty-first centuries in the expanding landscapes of public and popular history. Vassiliki Betty Smocovitis, University of Florida “Sommer carefully examines history and memory, as embodied and expressed in some particular areas of human biology concerned with evolution. Joanna Radin, Yale University “History Within offers an ambitious analysis of efforts to construct scientific narratives about human evolution and biological variation over the long twentieth century. For more information, or to order this book, please visit.