NEWS & LETTERS, Aug-Sep 2008, Hikikomori and a 'Second Japan' On June 9 a delivery truck rammed into a Sunday afternoon crowd in Tokyo, killing three. 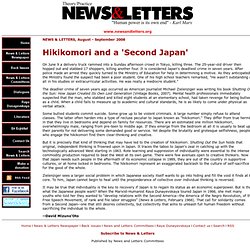 The 25-year-old driver then hopped out and stabbed 17 shoppers, killing another four. It is considered Japan's deadliest crime in seven years. After police made an arrest they quickly turned to the Ministry of Education for help in determining a motive. As they anticipated, the Ministry found the suspect had been a poor student. One of his high school teachers remarked, "He wasn't outstanding at all in his studies or extracurricular activities. The deadlier crime of seven years ago occurred as American journalist Michael Zielenziger was writing his book Shutting Out the Sun: How Japan Created Its Own Lost Generation (Vintage Books, 2007). Some bullied students commit suicide. Hikikomori - Social withdrawal in Japan.

» A Lonely Lockdown: The Hikikomori Phenomenon Post Bubble Culture. By Dylan Reilly Imagine, that, for whatever reason, life seems simply unbearable to you. 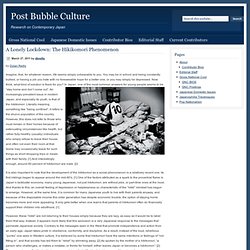 You may be in school and being constantly bullied, or having a job you hate with no foreseeable hope for a better one, or you may simply be depressed. Now think, what kind of solution is there for you? In Japan, one of the most common answers for young people seems to be “stay home and don’t come out”. An increasingly prevalent issue in modern Japan, and especially its youth, is that of the hikikomori. It is also important to note that the development of the hikikomori as a social phenomenon is a relatively recent one; its first inklings began to appear around the mid-80′s. [1] One of the factors attributed as a spark to the proverbial flame is Japan’s lackluster economy; many young Japanese, not just hikikomori, are without jobs, or part-time ones at the most.

However, these “hikki” are not returning to their houses simply because they are lazy, as easy as it would be to label them that way. Hikikomori, or connecting in the digital age. Copyedit0. Social or Mental Problem: Hikikomori. In Japan, the hikikomori phenomenon is something that the country's government supposedly views with a mix of disdain and worry. 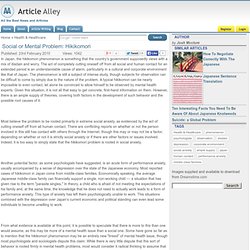 The act of completely cutting oneself off from all social and human contact for an extended period is an understandable cause of alarm, particularly in a cultural and corporate environment like that of Japan. The phenomenon is still a subject of intense study, though subjects for observation can be difficult to come by simply due to the nature of the problem. A typical hikikomori can be nearly impossible to even contact, let alone be convinced to allow himself to be observed by mental health experts. Given this situation, it is not all that easy to get concrete, first-hand information on them. Natural-Born Killers? Crime is the one thing Japan was always happy to admit was best made in America. 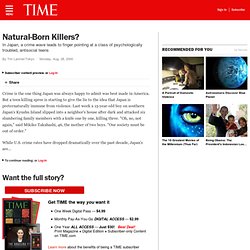 But a teen killing spree is starting to give the lie to the idea that Japan is preternaturally immune from violence. Last week a 15-year-old boy on southern Japan's Kyushu Island slipped into a neighbor's house after dark and attacked six slumbering family members with a knife one by one, killing three. "Oh, no, not again," said Mikiko Takahashi, 46, the mother of two boys. "Our society must be out of order. " While U.S. crime rates have dropped dramatically over the past decade, Japan's are... Subscribe Now Get TIME the way you want it One Week Digital Pass — $4.99 Monthly Pay-As-You-Go DIGITAL ACCESS — $2.99 One Year ALL ACCESS — Just $30! Hikikomori and Other Pathologies: A new approach to understanding Japan's competitiveness challenge. Q: With reference to your ideas about the differences between Western and Japanese ways of thinking, were the psychological tests given to the hikikomori you mentioned Western tests? 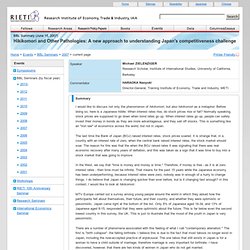 Are there any differences as to how a Japanese might react to the tests? A: There is a great deal about hikikomori that we do not yet know. For instance, we do not know the actual numbers of hikikomori in Japan. Psychologists estimate that there are around 1 million hikikomori in Japan. Japan's Lost Generation. Its now been three full weeks since the Tohoku Daishinsai, the Great North-East Earthquake of March 11 2011. 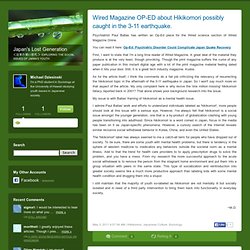 What I'd like to focus on in the next series of posts are continuing after effects of the 3-11 earthquake. It's clear that power company TEPCO, Tokyo Electric, has severely mismanaged the crisis at Fukushima. Image source- unknown (See this post for the original PSA of which this image is a parody.) 1. The fact that the General Electric reactor design was 40 years old and the reactors were at the end of their functional design lives, should have been decommissioned, were built right on the coast and so susceptible to tsunami's. 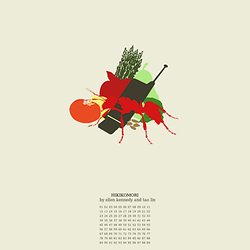