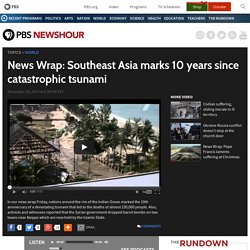 He was one of two officers shot dead last Saturday by a gunman, who then killed himself. Hundreds turned out at a church in Queens, a day before the Ramos funeral. At the same time, a spontaneous memorial of flowers and candles kept growing at the site of the shootings in Brooklyn. Meanwhile, in Oakland, California, Christmas night protests over recent police killings of black suspects turned violent. A crowd smashed windows and even wrecked a public Christmas tree. In Syria, there’s new word of government airstrikes that killed more than 50 people in the last two days. 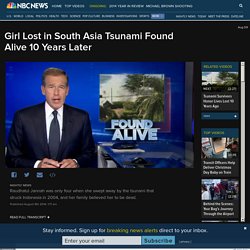 But it's unclear when Stacey Addison will be allowed to fly home for a reunion. The Portland, Oregon, veterinarian was arrested in September when sharing a taxi with a stranger on the small island nation, off the coast of Indonesia. After the stranger picked up a package, then Police stopped the vehicle and determined the package contained methamphetamine. They took everybody to the station. 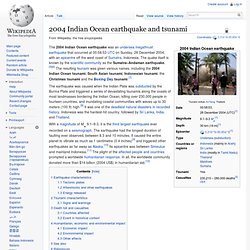 The quake itself is known by the scientific community as the Sumatra–Andaman earthquake.[5][6] The resulting tsunami was given various names, including the 2004 Indian Ocean tsunami, South Asian tsunami, Indonesian tsunami, the Christmas tsunami and the Boxing Day tsunami.[7] The earthquake was caused when the Indian Plate was subducted by the Burma Plate and triggered a series of devastating tsunamis along the coasts of most landmasses bordering the Indian Ocean, killing over 230,000 people in fourteen countries, and inundating coastal communities with waves up to 30 meters (100 ft) high.[8] It was one of the deadliest natural disasters in recorded history. Indonesia was the hardest-hit country, followed by Sri Lanka, India, and Thailand. Earthquake characteristics Tectonic plates Energy released. Important.ca. Asia Tsunami Blog List, Journals, Personal Accounts. Important Historical Events Asia 2004 Tsunami Blogs, Personal Accounts 2004 Asia Tsunami Blog List, Journals, Personal AccountsListed below are links to Asia tsunami web blogs, online journals and personal accounts about the 2004 earthquake and tsunami disaster in Asia. 2004 Asia Tsunami Blog List, Online Journals and Personal Accounts Canadian living in Phuket Personal account of the Asia tsunami as it hit Thailand, by a Canadian living in Phuket Relief work by non-profit foundation This is an account a non-profit foundation (IDEP) doing relief work. 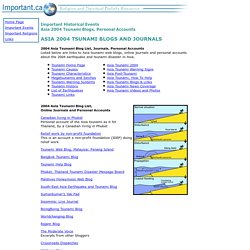 TSUNAMI SURVIVOR STORIES. Japan Earthquake Tsunami - What It's Like to Survive a Tsunami. On Friday, Japan was hit by an 8.9-magnitude earthquake, the largest to ever hit the country, causing a devastating tsunami that swept up much of its northeastern coast. 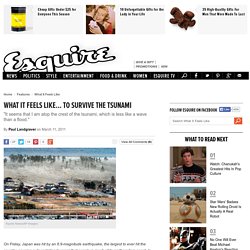 In our August 2005 issue, 33-year-old scuba instructor Paul Landgraver shared this story about surviving the tsunami that hit Southeast Asia. PLUS: What It Feels Like to Be in an Earthquake by Mark Twain and Surviving the 1958 Lituya Bay Tsunami >> Sitting around, day after Christmas, in Thailand, just staring at the TV, some movie we've seen before. Midmorning, post-breakfast stupor controlling Karin and me.

The power flickers and we moan. I look out the front door, just four hundred feet back from the beach. Then a small line of really brown water comes rolling toward us. There is a quiet rumble to it, like those white-noise generators. This was the last point my brain worked for a long time. We try and throw a mattress out the window to float on, but the water is rising too fast. I can't hear her. Indian Ocean Tsunami Warning System Not Working Properly, Say Experts. BANGKOK: Weaknesses remain in an Indian Ocean tsunami warning system, 10 years after the Boxing Day disaster that killed up to 230,000 people, experts say. 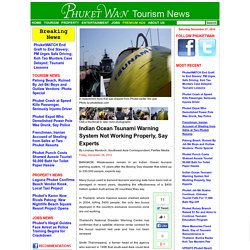 Many buoys used to transmit tsunami warning data have been lost or damaged in recent years, depleting the effectiveness of a $400 million system built across 26 countries, they say. In Thailand, where massive waves crashed ashore in 2004, killing 5400 people, the only two buoys deployed in the country's exclusive economic zone are not working. Thailand's National Disaster Warning Centre has confirmed that a satellite channel rental contract for the buoys expired last year and has not been renewed. Mr Smith urged Thailand's military rulers to review the country's disaster warning system that includes towers with loud speakers, despite progress made to alert residents to disasters over the past decade. 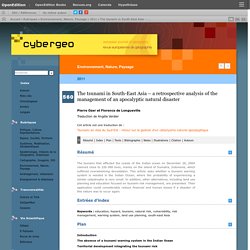 Indian Ocean Tsunami 2004-05. Tsunami in Southeast Asia: Full Coverage. Asian Earthquake and Tsunami Disaster. Author and Page information Boxing day , 2004, one of the largest earthquakes in recorded history (measuring 9 on the Richter Scale), struck just off Sumatra, Indonesia, in a fault line running under the sea. 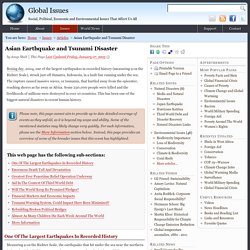 The rupture caused massive waves, or tsunamis, that hurtled away from the epicenter, reaching shores as far away as Africa. Some 230,000 people were killed and the livelihoods of millions were destroyed in over 10 countries. This has been one of the biggest natural disasters in recent human history. Please note, this page cannot aim to provide up to date detailed coverage of events as they unfold, as it is beyond my scope and ability.

Southeast Asia. Dart Center for Journalism and Trauma A resource for journalists who cover violence Southeast Asia Tip Sheet Feb 22 2011 Earthquake Advice From One Who's Been There By Trina McLellan Stay empathetic, stow your ego and keep focused on finding great stories: award-winning photographer Patrick Hamilton's experiences covering quakes in Papua, New Guinea are relevant to newsgatherers working in the Christchurch quake zone. 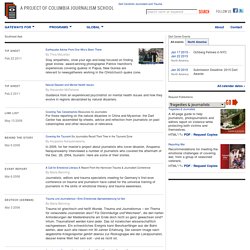 Tip Sheet Feb 2 2011 Natural Disaster and Mental Health Issues By Alexander McFarlane Guidance from an experienced psychiatrist on mental health issues and how they evolve in regions devastated by natural disasters. Link List May 13 2008 Covering Two Catastrophes Resources for Journalists For those reporting on the natural disasters in China and Myanmar, the Dart Center has assembled tip sheets, advice and reflection from journalists on past catastrophes and other resources of relevance. 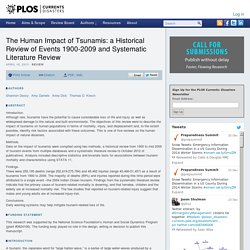 Although rare, tsunamis have the potential to cause considerable loss of life and injury as well as widespread damage to the natural and built environments. The objectives of this review were to describe the impact of tsunamis on human populations in terms of mortality, injury, and displacement and, to the extent possible, identify risk factors associated with these outcomes. This is one of five reviews on the human impact of natural disasters.

Impact of the Tsunami on reproductive health. RTB_book_chp21.