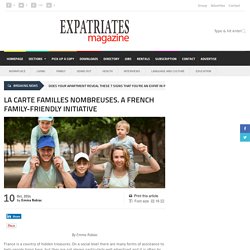 On a social level there are many forms of assistance to help people living here, but they are not always particularly well advertised and it is often by word of mouth that one discovers just what is available. This was the case for me regarding the “Carte Familles Nombreuses”. The “Carte Familles Nombreuses” is essentially a travel card which is available to families with three children or more residing in France, whatever their nationality.

It gives all members of the family, parents and children (including half brothers and sisters) access to reduced travel costs, up to -75%, on trains and buses (RATP and SNCF). As well as providing cheaper travel, the “Carte Familles Nombreuses” also entitles the holder to reduced rates in certain shops (C&A, Intermarché, to name just two) and selected tourist attractions, restaurants and theme parks. Application conditions are available on the SNCF website: Comments comments. France.FINAL. How parental leave rights differ around the world. As in so many things, Scandinavia got there first. 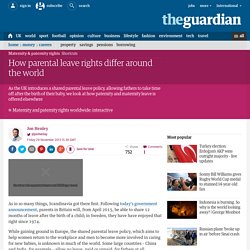 Following today's government announcement, parents in Britain will, from April 2015, be able to share 12 months of leave after the birth of a child; in Sweden, they have have enjoyed that right since 1974. While gaining ground in Europe, the shared parental leave policy, which aims to help women return to the workplace and men to become more involved in caring for new babies, is unknown in much of the world.

Some large countries – China and India, for example – allow no leave, paid or unpaid, for fathers at all. Under the UK plan, new mothers must take the first two weeks but will be able to transfer as much of the rest as the couple choose to their partner – or each parent could take 25 weeks together. The first 39 weeks will be paid at the statutory minimum. In Norway, the quota was introduced in 1993 and now totals 14 weeks. The United States No paid parental leave; a maximum of 12 weeks' unpaid parental leave for mothers and fathers.

Case studies of population policies since the 1900s

GCSE - Population Dynamics - Demographic Transition Model. Myanmar's census falls 9 million short of estimate. 29 August 2014Last updated at 13:42 ET Full details of the census, including data on the country's ethnic groups, will be released next year Myanmar's first census in more than 30 years has revealed that the country has 9 million fewer people than it thought. 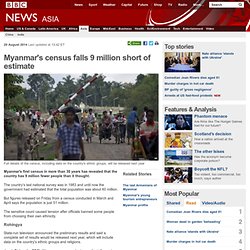 The country's last national survey was in 1983 and until now the government had estimated that the total population was about 60 million. But figures released on Friday from a census conducted in March and April says the population is just 51 million. The sensitive count caused tension after officials banned some people from choosing their own ethnicity. Rohingya State-run television announced the preliminary results and said a complete set of results would be released next year, which will include data on the country's ethnic groups and religions. Jonah Fisher, the BBC's Myanmar correspondent, says the tally went smoothly, except in some areas of the western state of Rakhine. 'Statistically significant' rise in net migration to UK. 28 August 2014Last updated at 10:36 ET Immigration minister James Brokenshire described the effort to cut net migration as "challenging" There was a "statistically significant" increase in net migration into the UK in the year up to March, from 175,000 to 243,000, the Office for National Statistics has said. 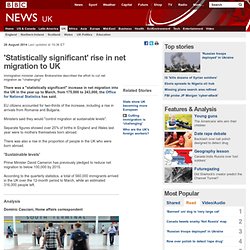 EU citizens accounted for two-thirds of the increase, including a rise in arrivals from Romania and Bulgaria. Ministers said they would "control migration at sustainable levels". The world as you've never seen it before. 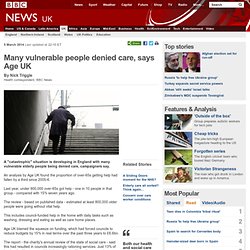 An analysis by Age UK found the proportion of over-65s getting help had fallen by a third since 2005-6. Last year, under 900,000 over-65s got help - one in 10 people in that group - compared with 15% seven years ago. The review - based on published data - estimated at least 800,000 older people were going without vital help. This includes council-funded help in the home with daily tasks such as washing, dressing and eating as well as care home places. Continue reading the main story “Start Quote Both our health and social care services need to work differently to respond to the needs of our ageing population” End QuoteNorman LambCare and Support Minister Age UK blamed the squeeze on funding, which had forced councils to reduce budgets by 15% in real terms over the past three years to £6.6bn.