The amazing significance of what a mother-to-be eats - BBC News. New research reveals the extraordinary impact that your mother's diet at the time of your conception has on the rest of your life, writes Michael Mosley. 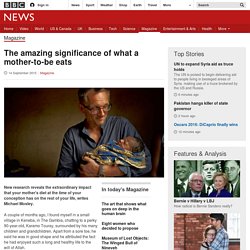 A couple of months ago, I found myself in a small village in Keneba, in The Gambia, chatting to a perky 90-year-old, Karamo Touray, surrounded by his many children and grandchildren. Apart from a sore toe, he said he was in good shape and he attributed the fact he had enjoyed such a long and healthy life to the will of Allah. I suspect that the time of year when he was conceived may also have played a role. A team from Britain's Medical Research Council, which has been collecting data on births, marriages and deaths in Keneba since the 1940s, discovered some years ago that in this part of The Gambia when you are conceived makes a huge difference to your chances of dying prematurely. So the effect is big, very big. Image copyright ALAMY So, what's going on? Image copyright Thinkstock Image copyright Getty Images. 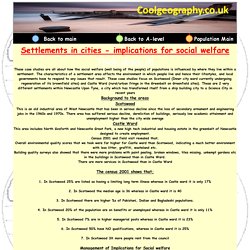 These case studies are all about how the social welfare (well being of the people) of populations is influenced by where they live within a settlement. The characteristics of a settlement area affects the environment in which people live and hence their lifestyles, and local governments have to respond to any issues that result.

These case studies focus on Scotswood (Inner city ward currently undergoing regeneration of its brownfield sites) and Castle Ward (rural/urban fringe in the Greenbelt on Greenfield sites). These are 2 very different settlements within Newcastle Upon Tyne, a city which has transformed itself from a ship building city to a Science City in recent years Background to the areas. Hans Rosling: Global population growth, box by box. Rural Urban Populations. Settlement case studies. Ideas for revision summary sheets - beware not all topics the same AS_CaseStudy_Guide. 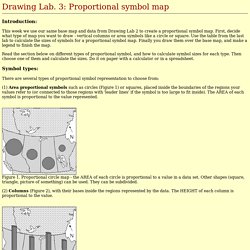 First, decide what type of map you want to draw - vertical columns or area symbols like a circle or square. Japan's Baby Drain. 101 East - Ageing Japan. Aging populations: Where people are getting older, mapped. In a recent Simpsons episode, a Japanese tourist moves in with Comic Book Guy, infuriating her father, who exclaims: “Daughter, you are coming back to Japan; there are 87 old people who need you to take care of them!” 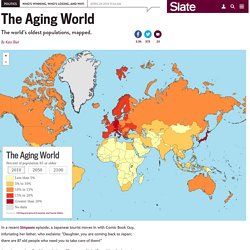 Japan’s exceptionally old population—23 percent of it is 65 or older, the largest percentage in the world and almost twice the U.S.’s—may be American joke fodder for now, but we won’t be laughing for long. In the next four decades, the populations of the U.S. and most other developed countries are going to be as old as Japan’s current population, according recent U.N. data. Increasing longevity and decreasing birthrates together will mean a smaller working-age population must support a growing retired population. That, in turn, may lead to higher taxes on the workforce and reduce capital available for investment elsewhere, cause recessions, and slow recoveries. Demographic Transition. During the Great Leap Forward which was initiated in 1958, between 25million to 35million Chinese population leaped into the grave. 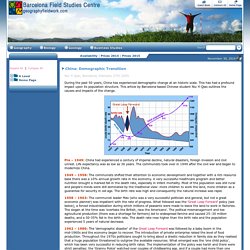 What was the Great Leap Forward, which had such a profound influence on Chinese society? 1958 was an important year in the Communist revolution: the Three Red Flags (the 'General Line', the 'Great Leap Forward' and the 'People's Commune') were put into effect. The Three Red Flags have a political background. China like the former USSR employed planned economic developments. After asserting its position in 1949, the communist government issued two Five Year Plans. The General Line was simply a general direction for planned economic development.

2. Advantages and Disadvantages of an Ageing Population - IHST1110 Project. Introduction There is no doubt that Australia’s population is ageing, therefore it is crucial to investigate what repercussions it will have on the wider community. 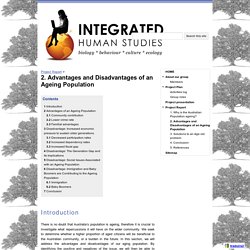 We seek to determine whether a higher proportion of aged citizens will be beneficial to the Australian community, or a burden in the future. Benefits from Japan’s ageing population « Population Matters. Is a nation’s destiny set by its fertility rates? 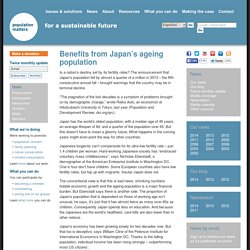 The announcement that Japan’s population fell by almost a quarter of a million in 2013 – the fifth consecutive annual fall – brought warnings that the country may be in terminal decline. “The stagnation of the lost decades is a symptom of problems brought on by demographic change,” wrote Reiko Aoki, an economist at Hitotsubashi University in Tokyo, last year (Population and Development Review, doi.org/qrc). Advantages and Disadvantages of Aging Populations - Grade 9 Geography 2012-13. What is an Aging Population? 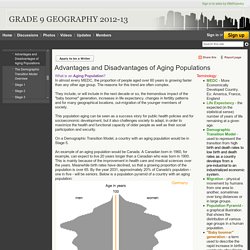 In almost every MEDC, the proportion of people aged over 60 years is growing faster than any other age group. The reasons for this trend are often complex. They include, or will include in the next decade or so, the tremendous impact of the "baby boomer" generation, increases in life expectancy, changes in fertility patterns and for many geographical locations, out-migration of the younger members of society. This population aging can be seen as a success story for public health policies and for socioeconomic development, but it also challenges society to adapt, in order to maximize the health and functional capacity of older people as well as their social participation and security.

On a Demographic Transition Model, a country with an aging population would be in Stage 5. The Impact of an Ageing Population on the Economy. Respect your elders: why the ageing population is good news. Independent Scotland faces 'significant' fiscal gap, warns IFS. Ageing populations. The increasing number of very old people has put a strain on healthcare services and social care services. 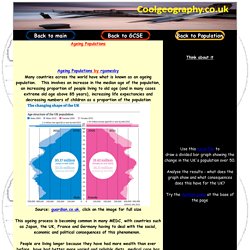 Very old people have particular needs (e.g. decreasing mobility, loss of eye sight etc.) that mean they need other people to do things for them. Health care is in ever increasing demand in the UK and it is proven that the elderly visit their doctor more often and have more home visits. They also occupy hospital beds for longer. The government of a country has to find money to pay for this care. Many countries face a pensions crisis whereby there is not enough money to cover the increasing pension demands of a population. AS_PopulationSchemeofWork_-_DB_sept_2012. AQA Case Studies Geography. Population policies - Ace Geography. Views on popluation growth - Ace Geography. Geographyalltheway.com - AQA AS/A2 Geography Resource Map. 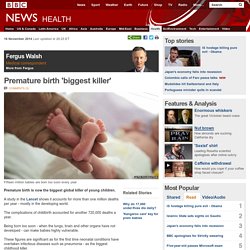